Sunday 1 November should have been a day for tasks on the plot - but with heavy rain and gale force winds, it was another day indoors!  And the night before, as Covid cases and deaths rose dramatically, the Government at last conceded that action was necessary if the NHS was not to be overwhelmed with thousands dying.  So, on Thursday, 5 November, having previously rejected the calls from the Opposition for a short-term, circuit-breaking lockdown (as recommended by the government's own scientific advisers), the Government announced a new national "Lockdown 2" to last until the beginning of December.  The intention is to "flatten the curve" -  to reduce pressure on the NHS which would otherwise be on the brink of collapse.  No doubt, as soon as lockdown is lifted, the numbers will rise again and we may be locked into this cycle until an effective vaccine is available.

It seems my i360 abseil attempt is cursed.  Having been postponed three times due to adverse weather conditions, it has now also fallen victim to Covid19.   The i360 is now closed to the public and will not re-open until the New Year and our "jump" has been rescheduled for 13 March 2021.

On a brighter note, despite the rain, we did venture into the garden on the first day of November and managed to harvest a fig before the squirrels got it.

It wasn't fully ripe, and was only just turning purple - but it was deliciously sweet and full of flavour.

The tree is only two years old and this was the first year that it has fruited, so we are looking forward to harvesting some figs in 2021.

On 4 November the weather had improved and we paid a brief visit to the allotment to see how things were progressing.  We lifted the fleece where we had sown some early peas and broad beans and were pleased with what we saw.  They had not been eaten by the mice (or rats) and the seeds had germinated.

The broad beans that had been planted earlier were also doing well.

On 6 November, the car had gone for its MOT and as it was a bright sunny day I walked to the plot. It's just over a mile on foot - less than half the distance by car as the railway line is not a barrier for pedestrians.  I took a stroll through the Aldrington foot tunnel and was pleased to see a graffiti tribute to the NHS.

On arrival at the allotment, I took advantage of a brief rest in the sunshine by the pond.

I did a a little bit of tidying up - no hard labour - and harvested some kale and chard.

On 10 November I did some tidying up in the garden at home. The Chocolate Habanero (one sole fruit) was looking OK but as I thought it would not survive outdoors for much longer I brought the pot indoors, initially putting it in the front porch.

Upstairs, in an unheated room, the medlars were bletting well, but needed regular inspection to remove any that might be diseased or growing mould.  Fortunately there were none at this stage and they looked almost ready for processing.

On 13 November I was back on the plot and picked our first kalettes.

They would be a nice accompaniment to my roast monkfish.

I was now harvesting kalettes regularly

The chocolate habanero that I had brought indoors at home was looking good so on 22 November I decided to rescue the remaining chillies in the garden.  It's almost December but the "hot lips" salvia seems to have burst into life again and is covered with red and white flowers.  Usually at this time of year they are all white.  As it is in full flower, I will have to put off cutting it back until February!


The Trinidad Scorpion chillies were small but had survived the drop in temperature so this was another candidate for bringing indoors.

I harvested quite a few hot wax peppers and a few Kashmiri chillies (which were still green) as the plants appeared to be dying.  One of the Kashmir plants looked salvageable so that was also brought indoors.  I pulled up the remaining tomato plants which had all died back but some had green tomatoes which I hoped might ripen indoors.  The pots and troughs in which they were growing were needed to plant my spring bulbs.

Enough of the garden - back to the plot!  The broad beans and peas that I had planted in October were thriving, as well as the shallots.

On 25 November the medlars at home looked ready for jelly making.  They had bletted well and were now quite squishy and very sweet. 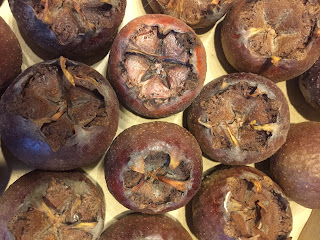 I had ordered some some early pea plugs that I had forgotten about so soon after they arrived I planted them out on 28 November.

On 30 November, I harvested most of the remaining chillies from the plants that had been brought indoors.  The purple cayenne had been particularly productive.

During the month we have benefitted from the squashes (butternut, Crown Prince and pumpkin) harvested earlier and we still have a supply to see us through December. There are many tasks to be completed over the winter and we hope that the new Covid19 restrictions (due to come into effect on 3 December), our health and the weather allow us to continue.
John Austin
Hove, November 2020
Posted by John Austin at 08:10