Apart from the allotment there were jobs to be done at home.  We had acquired, for free, two traditional garden benches and a table through our local social media network, Nextdoor.  A number of the slats were rotten and had to be replaced and the bolts were rusted up.  We managed to get some suitable hardwood slats on-line and our local Nut and Bolt Store in Hove had all the necessary bolts, nuts and washers. 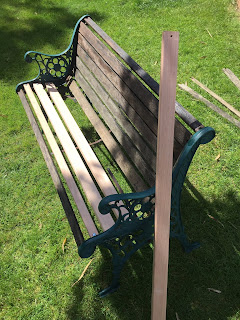 At the allotment, I had already planted out some of the brassicas, which had been grown from seed in the conservatory at home and hardened off in the garden.  This month I have planted out some more. This has included more purple curly kale, cavolo nero, Brussels sprouts, kalettes as well as purple sprouting broccoli. I planted some in the area where I had grown beans last year and some where I had lifted the first early red Duke of York potatoes, and some where garlic had been previously grown.


I also planted some brassicas where I had lifted the first half-row of the second early Charlotte potatoes. To give them a fighting chance against the wind and predators - pigeons, slugs and snails - I protected them with improvised cloches made from plastic drinks bottles.


I had also grown some cayenne and habanero chillies from seed at home, which I hardened off in their pots in the garden, where most remain, but I did risk planting out some on the allotment.
The warmer weather was also time to plant out courgettes. Some squashes and a couple of courgettes had been planted out at the end of May, but now I planted the remaining courgettes, more Patty pan, tromboncino, Crown Prince and pumpkins, all of which had been grown from seed at home.   I had created a frame for the tromboncinos to climb up but they seemed reluctant to do so and required a bit of encouragement and tying to the canes with string.

I was pleased to see that some of the fruits had set and tiny tromboncinos were beginning to develop
I also planted out some Dwarf French beans and runner beans which I had sown in pots and interspersed them with some directly sown seeds. It was also time to repair and renew the climbing frame for the runner beans. I was also given a few haricot bean plants and planted these at the end of the runner bean rows.

Tomatoes on the allotment have never been a great success, but last year my brother had given me a packet of seeds for golden cherry tomatoes and I had sown these in seed trays at home and potted on into large pots and decided to train them up strings against the garden fence at home and they seem to be faring well. Time will tell. 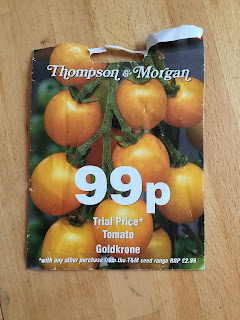 June was definitely the time to wage war on weeds. We have loads of annuals such as chickweed, ragwort, goosegrass etc which are fairly easy to pull up (although the goose grass, which appears easy to remove, leaves behind a newtwork of fine roots which seem to send up new plants).  If lifted before they go to seed, the annuals are added to the compost bin, or stored in plastic sacks for later addition to the compost bin.  But we are plagued by more resistant invaders such as Dandelion, bindweed, bramble, stinging nettles, creeping buttercup, groundsel and plantain which we do not add to the compost heap.  You can never elimiate bindweed or couch grass, as the tiniest piece of root left behind will turn into a prolific growth.  The same is true for any piece of the deep taproot from dandelions that may be left in the soil.  It's a constant battle.

Mulching and hoeing keep down the weeds and adding a good mulch around established plants helps retain moisture and adds nutrients. I usually use grass mowings from home, and bark and bush and tree prunings which are readily available on site.

In May and June we also continued to earth up the remaining potatoes, which are now well established, to encourage the development of new tubers and retain moisture.


Where our early peas had finished in one of the raised beds, we cleared and raked the area to sow some more beetroot,


By mid-June the brassicas had grown into sturdy plants (but in need of weeding and protecting from pigeons!)

Towards the end of the month we planted out our leeks as there was no room for them earlier!  They had been grown from seed in trays at home then transplanted to a seed bed on the allotment.  We planted some where we had lifted the first early potatoes and some where we had grown the garlic.  We planted them in the traditional way, making a hole in the ground about 6 to 8 inches deep with a dibber and dropping in a leek seedling then watering by filling the hole with water, allowing the soil to gradually fill the hole and the leek to expand over a period of time.


There is a lot of self-seeded perpetual spinach and chard where the early potatoes were. I have removed some but left quite a few plants on either side of a double row of leeks.  I realise that I may have to remove them later if they restrict the leeks, but in the meantime they will produce some young tender leaves.

We have also had a bumper crop of raspberries, best eaten fresh but can be frozen if picked firm or used for sauces or jam if past their best.

Our black currants have not been so good this year but this may be due to them having been moved and replanted last year and not pruned back.  The red currants on the other hand did well and the investment in a fruit cage paid off as we ate them this year rather than the birds.


Our makeshift netting on the blueberries also paid off with us sharing only half the crop with the birds this year.

The end of the month saw our first courgette from the earlier planted ones.

And the later ones are ready to produce next month


The Patty pans are coming along nicely


The runner beans are in flower


On the last day of the month the plot looked green and productive, although a little untidy, and it looks like there will be loads to harvest next month. 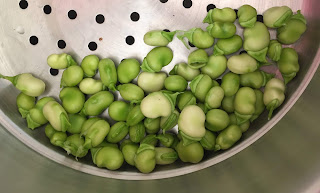