We returned from our brief break on 7 April and thankfully all the seedlings indoors  at home had survived.  We had been worried that everything on the allotment might dry out as rising temperatures had been predicted, with no rain expected. Whilst we had been away, however, temperatures had fallen with some heavy frosts on occasion.  There had been snow in many parts of the UK and Hove had experienced sleet and strong winds.  The following day I went to review the possible damage at the allotment.

Fortunately, the broad beans had withstood the wind and the autumn sown ones were in full flower.  The only real damage was to the Duke of York first early potatoes which appeared to have been caught by the frost.  This is how they looked when we left them a fortnight earlier:

...and this is what they looked like on our return

The wind or the frost had blackened and killed off some of the leaf growth but thankfully there were signs of new growth.  I think the mulch of grass cuttings that we had applied last month might have helped their survival.

We gave the potatoes a good watering and earthed them up hoping the Duke of York would recover.  The later planted Nicola & Charlotte  did not appear to have been affected by the weather.

There was a lot of rhubarb waiting to be picked.

The peas were coming along nicely altough there were some gaps.

I sowed some more mange-tout in some guttering at home so that I could fill the gaps later.  Some of the spinach was going to seed but there was lots to harvest and we were also able to pick a good supply of purple sprouting broccoli.

The temperature was not wonderful the following week. On 19 April the temperature rose to 15C, but with a chilly wind, and was down to 6/7C at night.

I did take a risk, however, of planting out some patty pan squashes as I was running out of space at home and in our mini-greenhouse in the garden.  We also managed to pick five spears of asparagus and a good supply of the last of the broccoli.

At home I sowed some Crown Prince squash in pots but discovered I only had two seeds left from last year, so will have to buy some more seeds or buy some plants from the garden centre - unless someone on the allotment has some spares.  I also sowed one giant pumpkin seed.  We are limiting ourselves to one plant this year as we had a surfeit last year - and still have one at home!

The autumn sown broad beans were now in full flower and, fingers crossed 🤞, are free of blackfly.
At home the front garden was a riot of colour with tulips and anemones

At home, the spare Charlotte potatoes, planted in a growbag have just appeared above the surface. 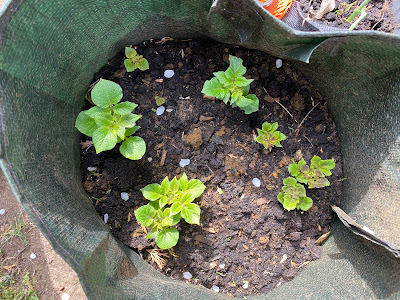 Although I have managed to increase the "no dig" areas on the allotment, there is a long way to go.  I had allowed the area where the brassicas are to go to become somewhat overgrown in the autumn but had largely cleared it of perennial weeds and had emptied one of the compost bins on the area and had left the pile over the winter.  On 16 April I spread the pile and begun to lightly fork it in.

Last year's Rainbow Chard had survive the winter and was puttig on new growth but was showing signes that it was about to go to seed.  Neverthe less there will be pickings for some weeks to come.  Some of it was self-seeded - often in inconvenient places - so it will have to be removed but whilst it is still producing leaves, I am happy for it to remain.


We were away for a few days towards the end of the month and when we returned on 29 April we were pleased to see that we could probably look forward to a good crop of broad beans but sad to see that the blackfly had arrived.  Usually the autumn sown crop matures before the blackfly arrive - not this year it seems!

We are trying to avoid the use of pesticides, so I started by hosing down the plants to wash off as many blackfly as possible and then sprayed the plants with soapy water, including the underside of leaves.  I had read that the addition of a few drops of pungent natural oil such as rosemary, peppermint or clove oil to the spray was effective - apparently almost any natural oil will do.  I had some mustard oil in the kitchen cupboard which we use in Indian cuisine, so added a few drops.  So far it appears to have been effective.

On the last day of April, I noticed that the redcurrant bushes were fruiting so the time has come to repair the cage and replace the netting if we are not to lose the entire crop to the birds.

The potatoes seem OK, particularly the Nicola and Charlotte second earlies. The First Early Duke of York, which were planted perhaps a bit too early have not yet fully recovered from the late frosts, but we are still hopeful.

The sugar snap peas were looking good but will need some support - another job for next month!

It was also time to start thinking about climbing beans and some repairs were needed to the frame.

The planting season was now in full swing and we have picked the last of the purple sprouting broccoli as well as a few more spears of asparagus.  Just hoping that May will see some higher temperatures and that the cool wind will disappear.