It had been a good year for apples, and this year they had been largely pest and disease free.  We have frozen a lot, ready for pies and crumbles and this year Sylvi has also had a go at bottling (which, for some strange reason, the Americans call "canning") and also making cider vinegar.
The beginning of the month was warm for the time of year but generally only just reaching double figures during the day and down to 3C at night.
Work continued on building a frame for our second Hugel bed, using old pallets.
The late pumpkins (Rocket) appear to be ripening, so fingers crossed that they might be ready before the frosts set in.

There was plenty of Cavolo Nero to be picked which is excellent for making Ribollita, a delicious Tuscan dish.

The late tomatoes which we had picked had ripened successfully indoors and we also harvested a late aubergine. We were also kept busy thinking of new things to do with squashes.

On  5 November we gave the broad beans a top dressing of coffee grouts, tea leaves and crushed eggshells, hoping these might keep the slugs at bay.
I have moved two chilli plants to the conservatory at home, Basket of Fire which is moderately hot at 80,000 Scoville heat units and the slightly hotter Apache at 80,000-100,000 SHUs
Hügelkultur, a German word meaning mound culture or hill culture, has been practised in Central and Eastern European countries for centuries and is one form of permaculture.

Permaculture is a method of gardening, horticulture or agriculture which is based on natural ecosystems, working with nature rather than against it.  Essentially it is sustainable gardening, mimicking  what happens in nature and in turn reducing energy consumption, conserving water and safeguarding the natural environment.

Traditionally, a Hugel bed would be a mound maybe 1 – 2metres high with sloping sides, thereby increasing growing area compared to a flat bed. 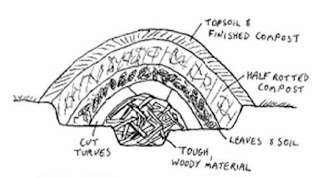 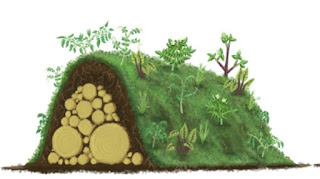 In the wild, plants die, leaves fall, trees decay and an army of insects, funghi, and micro-organisms get to work transforming dead matter to rich compost which can support new growth. Usually, a Hugel mound would be a pile of logs, branches, leaves, grass clippings, straw, cardboard, manure, compost or whatever organic matter is available topped with soil in which you can plant your vegetables and flowers.

On my plot, I have combined the principles of Hugel culture with the more familiar  raised bed, by digging a trench to bury the wood and twigs below ground and filling in with other organic matter, finally topping with compost and topsoil. I ensured that there was a  layer of at least 6 - 8 inches of top soil and compost on top of the unrotted and partly composted material. The process of composting requires a lot of nitrogen and if the top layer is too thin the composting process might deprive the plants of this vital element for their growth.  We have added nitrogen to the bed by the addition of "worm tea", the liquid run-off from our wormeries.

As the buried wood decays, it provides a consistent source of nutrients for the plants above for 10-20 years. During the first year or so it will need regular watering, allowing  the logs to soak up the water, but after that it will need only occasional watering, possibly only once per season (unless there is a prolonged drought).  The wood can absorb a lot of water acting as a huge sponge during  the rainier seasons.  Hard wood is better for this.  During the composting process, heat is generated which can extend the growing season and the process also aerates the soil - so no digging is required.

Hard woods are generally better than soft woods for this process although there are some woods which should be avoided such as Walnut, Eucalyptus and Black Cherry.  Soft woods are usually OK but there are certain varieties, high in resin which are allelopathic,(they contain natural herbicides and pesticides) – ones to avoid are Cedars and Juniper.  Yew is also highly toxic.  To be safe, it is better to use wood that has already started to decay. If using prunings, especially from fruit trees, it is important to ensure the twigs/branches are dead to avoid the possibility of them rooting or sprouting.

The weather was beginning to get much colder, although on 7 November the sun was shining brightly, but I thought it was probably time to harvest the remaining tromboncinos and take them home.

On 10 November I sowed some early peas in the first Hugel bed at the opposite end from the broad beans.  We then went away for a few days for a well earned rest.  After our return I sowed a double row of broad beans on 25 November in the second Hugel bed and covered them with fleece and some old wire shelving to hopefully keep rodents away.

The Rocket pumpkins looked almost ready to harvest and with heavy rain forecast it was the time to think about taking them home. But as the sun was still shining I thought I would give them a few more days to harden off.

We had picked loads of apples and have given away bags full.  After the strong winds there were now very few left on the tree, but lots of windfalls
At home we had a cooking session, making tromboncino and ginger soup which we have frozen to see us throught the winter!  Usually we have roasted them in their skins and then used the pulp for the soup, but this time we peeled and boiled them.

The beginning of the month had been warmer than usual for November but the month ended with freak storms and, in some parts of the country, the lowest November temperatures for 20 years - minus 8.5C in exposed places.  Our Sheffield family saw heavy snow falls and Northumberland, where my younger son lives, experienced winds of 98 mph.  They were also without electricity for two days.
When my nephew, who is only 26 miles away from us, on the south coast, visited his local golf course at the weekend, this is what he found:

We hadn't experienced snow or stormforce winds but the weather in Hove wasn't pleasant. We did experience zero temperatures, rain and a lot of strong winds - enough to keep me off the plot for a few days.  Hoping that the winds subside and we have a few dry days next month as there is still a lot to do.