After a wet start to the New Year, temperatures plummeted to zero and below by the second week with heavy frosts.  The water tank by our plot had ice 7 - 10 mm thick.
8 January was our first visit of the year 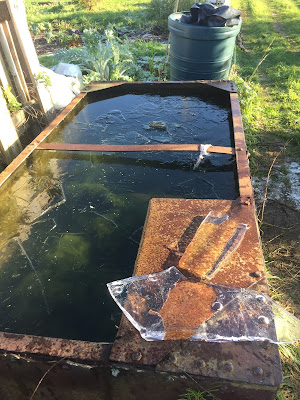 Although the ground was frozen on the surface, it was possible to turn it over so I used the opportunity to begin to clear the weeds from the area designated for the potatoes - the area where the beans and squashes had grown last year.
I also began to remove the weeds along the boundary with our neighbour to the east.
The broad beans that I had planted out in December had survived the wind and frost but there was no sign of those that I had directly planted in December, despite being protected with fleece.  Either conditions were not conducive to germination or the mice had eaten them.
The November sown beans were also looking good but were in need of some strings to prevent wind damage.

The early peas (Douce Provence) that had been planted as plugs were also OK but will need some sticks or twigs soon so they can climb.

Although it was cold, there was no wind and it felt quite warm in the sunshine with long shadows being cast as the sun was low in the sky.
There was still celery to be harvested.  A supposedly self-blanching variety, it has thin stems which are not suitable for salads but make excellent soup and stews.
Chard can also withstand the cold temperatures and there was plenty to pick.
In the garden at home the Helibores and Camellias were in bud.

Sunday 10 January was another bright, clear day but very cold with a very heavy frost but the shallots and peas seemed to have survived.

The dry spell was not to last as it was followed by 4 days of prolonged heavy rain
Thursday 15 January was a cold bright day with a maximum temperature of 3C
I had acquired a pocket hand-chainsaw and decided to give it a try on the unwanted bush.
It was hard work, but effective.  I think I need someone younger, fitter and stronger to complete the task.  A request to Luke, I think!
The broad beans planted out in December were still looking good but there was no sign of any growth under the fleece where I had also directly sown some beans - I have to accept that they have rotted or been eaten by the squirrels or mice!
I will sow a few more in pots at home for planting out next month. On the positive side, there were the first signs of purple sprouting broccoli.
I pinched out a few of the heads (to eat of course) but also to encourage growth of side shoots.

The cold dry spell was not to last very long and the persistent heavy rain returned - but whilst we had downpours, our family and friends in East Anglia and the North and North East saw heavy snow falls.
One thing I can do during the heavy rain is sit at home and make a list of things to do -
1.  finish cutting back the plum trees and spraying with a winter wash
2.  dig over and remove weeds from the patch to grow the potatoes
3.  finish pruning the blackcurrants
4.  prune the red currants and replace the netting
5.  divide and transplant the garlic chives
6.  cover the rhubarb and start forcing
7.  chit the potatoes
8.  wash the seed trays ready for sowing
I have made slow progress with some of the tasks
1. Spraying the plum trees is important to help control pests and diseases by knocking out overwintering eggs, removing debris and reducing fungal spores.  I have an organic oil wash which, when mixed with water and sprayed on the trees, will smother overwintering insects and their eggs but is otherwise not harmful to the environment.  I will be careful to ensure none gets near the pond but I am waiting for a dry day without a strong breeze.
2. The ground is far too wet to dig over the rest of the potato patch, so that will have to wait.
3. I have made a start on pruning the blackcurrants.
4. I have cleared the are around the redcurrants and applied a general mulch and am in the process of reinstating the netting.
5. I have dug up and divided the Asian garlic chives, potted up some (as an insurance policy and/or to give to friends) and replanted the remainder. I also dug up and divided the ordinary chives and will bring them on in pots before re-planting - I have eight pots so I'm sure some will be successful!
6. I covered one part of the rhubarb with an upturned bucket to see how it would progress, and will find a suitable cover for the rest.
7. I have started chitting the Charlotte and Nicola potatoes (2nd earlies) but am still awaiting delivery of my First early Red Duke of York (delay is due to heavy snow in Scotland)
There was brief relief from the rain on 18 January when I tried to do as much as possible.  It also gave Sylvia a chance to continue with her internal shed renovation project with new shelves and hooks and a general tidy up.
The rhubarb was just showing through in two clumps
Below is the patch I have now covered with an up-turned bucket.

I cleared the weeds from the containers where the blueberries are growing and gave a top dressing with ericaceous compost.  There were signs of the first buds; an encouraging sign that spring is on the way.


I did manage to clear most of the weeds around the redcurrant bushes before applying a mulch and reinstating the netting.  The chives had been growing between the bushes so I cleared a nearby area for a new home.

I also relocated the compost bins (and their contents) to the rear of the plot.  In a couple of months the compost might be ready for spreading/digging in.

The dry spell did not last for long before the rains came down again with severe flooding in may parts of the UK.  Storm Christophe had arrived.  We had a brief respite on 25 January with a day of bright periods and blue skies, although colder, but much of England was still under heavy snow!

A final January visit on 30 January revealed that the forced rhubarb was doing well under an upturned bucket and will be ready for eating soon.  I located an old black recycling box which I have placed over the rest of the rhubarb. 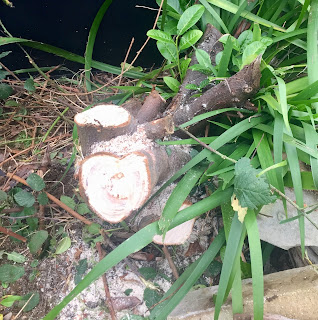 Digging out the roots might be a more daunting task - but it will free up quite a bit of growing space.
As the month drew to a close, I was able to pick some purple sprouting broccoli

There were still a few kalettes to be harvested.....

There is still much to do to prepare the ground for planting and create a space for the polytunnel that has sat in its packaging in the shed for a few years.  A glance at the weather forecast for the beginning of February is ominous with more heavy rain predicted.  There is cause for some optimism though. On 28 January we received our first Covid vaccination and hopefully will have our second by mid-April.