On 1st March, the first day of Spring in the meteorological calendar,  it was bright and sunny with a gentle breeze - a good opportunity to get outside and tidy up the garden.
One of the first tasks was to clean out the hanging baskets and various pots that had hosted last year's summer plants.  Usually the pelargoniums survive the Sussex winters, but sadly not this year . Storm Darcy had taken its toll and the pelargoniums were not the only victims as we had also lost some of our half-hardy fuchsias.  On the positive side, some of the daffodils came out in time for St David's Day, the Hellebores are in full flower and the buds on the Camellias  are beginning to open.
It's only the first day of March but as we are in the south, I sowed some vegetable seeds for germination indoors.  I have sown purple kale, kalettes, Tuscan kale (Cavolo nero) and Brussels sprouts.
Of the chilli/capsicum seeds I sowed last month, the Apache, Basket of Fire and Anaheim have germinated, but there is no sign yet of the habanero or Trinidad Red Scorpion  which I think need a warmer environment.
The purple mustard greens which I had sown in December and put out in the garden to harden off were a bit battered and overcrowded so I thinned them out and transplanted to individual small pots.
The Aquadulce broad beans  and Oregon sugar pod peas, which I had sown in pots in the conservatory only a week ago, had germinated and should be ready to go outside in a sheltered spot to harden off later in the week.
2nd March was a bright sunny day and I continued work in removing couch grass from the raspberries, weeded around the pond and started to clear the area where we hope to erect the polytunnel.  The rhubarb was doing remarkably well.
What a difference a few days of sunshine make.  I had written of the broad beans that had been devastated by Storm Darcy  but they seem to have made a remarkable recovery the photo below shows the December planted beans as they were on 14 February and how they looked a week later.
They continue to make good progress. I just hope we don't get another extremely cold spell as they are just beginning to flower!
The broad beans which had been grown in pots at home and planted out in January had escaped wind damage and those sown directly in January were just beginning to develop.

The fruit cage had been replaced over the red currants and leaf buds were beginning to appear.

Back home, I continued with sowing seeds indoors - more purple sprouting broccoli, Collard greens, two varieties of cherry tomatoes (Cherry belle and Summerlast) and two beef varieties (Corazon and Pantano Romanesco).
3rd March. A planned visit to the plot was abandoned due to unexpected heavy showers so I continued with seed planting at home.  This included some flowers,  Cosmos, Linum Grandiflorum  and two varieties of Sunflower -  one a tall variety, Giant yellow (expected to grow to 1.8-2.7m, 6-9ft) and the other, Titan (which should be slightly shorter but with flowerheads up to 50cms, 18inches in diameter). We should know by July whether or not it "does what it says on the tin"
I also sowed some more early purple sprouting broccoli (Santee) and a later variety, Rudolph.
4th March was a misty, cold, damp day spent indoors but I sowed some Basil (floral spires Lavender)  and as the parsnips (Tender & True) sown last month showed no signs of life, I sowed some from another packet saved from last year (Hollow Crown) - seedlings should appear in 14-32 days (some time between 18 March and 5 April 🤞

5th March was slightly overcast but without winds and, as the table in our conservatory is becoming rather crowded, we decided to look out the polytunnel we had bought 6 years ago and which has sat in its box in the shed.  We had bought it as an end of line sale for £10 when the real price should have been about £60!  I think at today's prices it would be nearer £100.  We had no idea what condition it might be in so were pleasantly surprised to find that it appeared OK.

It was not of high quality but we started to put it up at the back end of the plot, where the leeks had been last year.

Sylvi had a small bonfire to rid us of the masses of brambles that she had cut down so that we could access the back of the shed and the plum trees and the apple tree which had become engulfed and I planted out some purple mustard greens under a fleece tunnel.
At home the Camellias were beginning to flower so I gave them a feed with some liquid ericaceous fertiliser.

6th March was another fine dry day and I prepared two narrow trenches about 8-10 inches/20- 25 cms deep, for planting potatoes.  I partially filled the trenches with peat free compost and raked in some dried blood, fish and bone fertiliser. 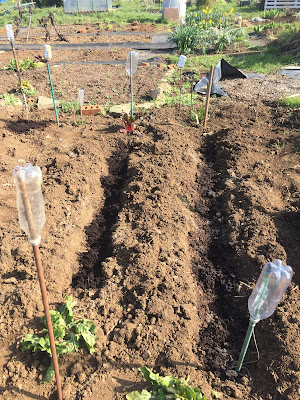 Sunday 7 March was another fine sunny day and fortunately our co-worker, Luke, was on hand and, being taller than the polytunnel, which is 180cms high, was easily able to lift the cover over the frame.

I also found time to plant two rows of First Early potatoes.  I had ordered some Red Duke of York which had done so well in previous years and they are delicious roasted in their skins when young.  Regrettably the Scottish seed potato suppliers have been having a difficult time and there have been delays in deliveries and shortages.  Ours came from Perth but we were informed rather late in the day that Red Duke of York would not be available this year and they sent traditional Duke of York.  These are a yellow flesh variety which are said to be very reliable, disease resistant and among the earliest.  They had not been chitting for as long as I would have hoped due to their late arrival but had begun to show some shoots.  I left around 3 shoots on each potato, rubbing off the excess and planted them about 10 inches (25 cms) apart.  The recommended distance is 12 inches (30 cms). The rows are 2 feet (61 cms) apart.  Having planted them about 6 inches (15cms) deep on top of the compost, I raked over the soil to fill the trench.  I did not earth up but will do so as soon as shoots appear.  I have some left over so will plant them later in bags or tubs.
I have some 2nd earlies still chitting in the shed at home, Nicola and Charlotte varieties, which I hope to plant at the end of the month.
With the longer days, I carried on working, clearing around the pond.  I also removed the papyrus which had taken over one end of the pond and had outgrown the pot it was in.  A lot of it was dead and choked with couch grass,  which was even growing in the pond, but there were signs of new growth, so I divided the plant (removing all the couch grass) and repotted to put back in the shallow end of the pond.  We also removed a number of suckers around the plum tree next to the pond which were also engulfed with couch grass and bindweed.  The bind weed extends further than we thought, so there is still more to do.  It was time for a sit down, however, before returning home!
We will have to wait to see if any of the frogs, toads or newts have returned but there is no sign of any spawn.
9 March saw a sudden change in the weather with the arrival of gale force winds across the UK.  In Hove we had gusting winds of 50-60 mph.  We feared for our new polytunnel.
Those fears were well-founded as an inspection on 11 March revealed.

On Sunday 14 March we cleared away the damaged polytunnel and are assessing whether it is worth trying to re-cover it, or perhaps use netting to create a fruit cage.  Apart from the cover some of the connecting joints were also damaged in the storm and will need to be replaced.  There was some good news, however, as we harvested some purple sprouting broccoli.
At home the table in the conservatory was becoming overcrowded with seedlings and I needed space for more.  Although the heating in the conservatory is turned off, it does benefit from some warmth from the house and some of the seedlings which will need to be hardened off later in the month were looking a bit leggy so, in the absence of a polytunnel, I transferred some to the front porch which is somewhat cooler.
The ones I moved included some of the brassicas, and some flowers such as Cosmos.
That evening we had the broccoli with our dinner and it made all the effort worthwhile.  As commercially grown sprouting broccoli has to harvested by hand, it is usually very expensive - and never as good as that grown at home.
St Patrick's Day, 17 March was forecast to be dry and sunny - but a brief visit to the plot proved otherwise and on arrival we were caught in a heavy shower.  We fed the worms, staked up some of the  broad beans and beat a hasty retreat!
Later that afternoon the sun emerged and I was able to do a few chores in the garden.  The tulips, planted in containers, were showing through and beginning to form flower buds.
We may not have shamrock for St Patrick's Day, but we do have chives which we could add to our Champ or Colcannon . Wikipedia also has a view on the difference between Champ and  Colcannon

Friday 18 was a fine day and I prepared a third trench for potatoes, part filling with some good compost and a dusting of organic fish, blood and bone fertiliser.
I was also able to do some weeding around the broad beans sown in January.
The November sown broad beans were flowering so I am hoping there will be no sudden frosts.

Sunday 21 March, the vernal Equinox and first day of astronomical Spring was another fine day and Sylvia spent a long time behind the dilapidated greenhouse cutting back brambles and pruning the plum trees and it is now possible to walk behind it for the first time.  We inherited the greenhouse, which is just a frame.  We were told the previous plot holder's wife had smashed all the glass as part of a marital tiff!  As we lost our polytunnel we are thinking about whether the greenhouse frame can be reglazed.
I started to clear part of the old brassica patch, but some of the kalettes and purple sprouting broccoli are still producing.

I also began to dismantle the old wooden frames that had been used in past years for the runner beans and cucumbers and took them home to treat with wood preservative and to renovate them. 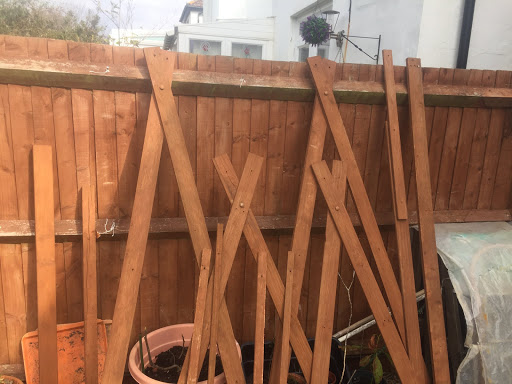 Monday 22 March I began to reassemble the frames on site but need some more wood for crossbars to prevent wobble.

23 March I had read a tip somewhere about using used teabags for sowing seeds and decided to give it a try.  For my first attempt, I made a small tear in the teabag and inserted a geranium (pelargonium) seed.
I tried a second batch by cutting off one side of the bag making a small sack in which I sowed chillies and sweet peppers.

The teabags do dry out very quickly and need constant watering.
The home sown tomatoes and several of the chillies have now grown their first true leaves and are almost ready to be transplanted to single pots.