(and in the Garden)

My first concern on returning home, after almost a fortnight away, was for my tomato seedings and fortunately they had all survived and were looking healthy.
A visit to the plot on 3 March revealed little damage as a result of the February storms and all the plants had survived, although the kalette and broccoli stems were all at a jaunty angle as a result of the strong winds.  As expected, our plastic storage box was beyond repair and although the shed had survived, it was already in a poor condition and we had planned to replace it this year.

The garlic was looking healthy, both the Vallelado, planted in November and the Eden Rose, planted in January

The Mehnir shallots were also showing signs of growth and should be ready for harvesting in August/September.
There was a good crop of purple sprouting broccoli to be picked.

We removed one of the covers from the ruhubarb and were able to harvest a crop of well over 1/2 kilo and leave sufficient for another picking.  We decided to leave the other cover on for a few more days.
On Sunday 6 March I decided to plant a second row of Duke of York potatoes.
Conventional advice is  that the the date for planting Red Duke of York potato seed should be calculated on the basis that seed potatoes will take four weeks before they appear above ground. Given that you want them to appear above ground only when the danger of frost has passed (the last week of April is the UK average) the last week of March is considered about the right time to plant them.  I took into account that we are in the south east of England, one of the mildest areas, that most historical advice has not taken global rising temperatures into account and past experience of early planting.  I planted one row of Duke of York as early as February and the second row, one month later.  If there is any threat of frost after the foliage appears, I will earth them up i.e. cover with soil.
Sylvi provided me with some good compost from the wormeries and I spread this over the area where the next lot of potatoes will go.
On Monday 7 March I took a further risk and planted a row of Nicola First Early potatoes.
I also removed the covers from the rhubarb

I directly sowed 3 double rows of peas in raised beds, Oregon Sugar Pod, a mangetout variety, Hurst Green Shaft and Kelvedon Wonder, and covered the beds with sheets of horticultural fleece.  I also sowed a row of mixed varieties of "Rainbow" beetroot.
The following day I spent at home and potted on the tomato seedlings which had been growing indoors in trays - these were all beefsteak varieties.
There was also time to make a Rhubarb and Ginger Yoghourt Cake

On 9 March I planted out a row of Charlotte First Early potatoes. There was no evidence that the parsnip seeds I had sown a month earlier had germinated so, the following day, I bought a small tray of seedlings from the local garden centre and planted these out where the seeds had been sown.  I also sowed some boltardy beetroot.
I have not had much success with carrots in previous years but on 12 March I sowed some Carrot Flyaway F1 in a container hoping that theu will be at a sufficient height to avoid carrot fly.  The Flyaway variety is said to have low levels of the chemical that attracts carrot fly.  We shall see!
We continued to harvest the forced rhubarb on a regular basis but with the covers removed have left the rest to nature.
At home we were beginning to see signs of germination.....

And the Basket of Fire  which had been grown in the open last year and potted up and brought indoors in the autumn was now flowering.

Whilst this year's kalettes were germinating, we were still picking many from last year's crop.
14 March
At home I had some garlic cloves left over from earlier planting so I have now planted these in a container in the garden.  I have also sown some mangetout peas in a length of guttering in the garden and several varieties of Basil in pots on the kitchen windowsill. I had a packet of Sweet Pea patio mix left over from last year and sowed these in a container in the garden. Instructions are to sow indoors from January to April or from mid-April outdoors as they are most likely to germinate with temperatures of 13-15C.  As it was a sunny day and 12C with temperatures in the next week predicted to be above 13C I decided to take the risk.
I also had some Jacaranda  seeds that I brought home from Spain last year so sowed a few in pots indoors.
In the garden, the true Quince, Serbian Gold, that I had planted in the autumn was beginning to come into leaf.
On the plot there was still plenty of purple sprouting broccoli to be harvested.

The Duke of York  potatoes were beginning to show so I earthed them up slightly.  I had cut the lawn at home for the first time this year and I used the grass mowings to provide a mulch for the potatoes.  No rain is forecast over the next week and it has been very warm and sunny, so the ground is very dry.  The mulch will help conserve water.
Two days later, I spotted a Peacock butterfly and what I think was a Tortoiseshell competing for the nectar on a dandelion, but the Peacock won and the other flew off and I couldn't be sure if I had identified it correctly.

It is certainly a colourful time of year 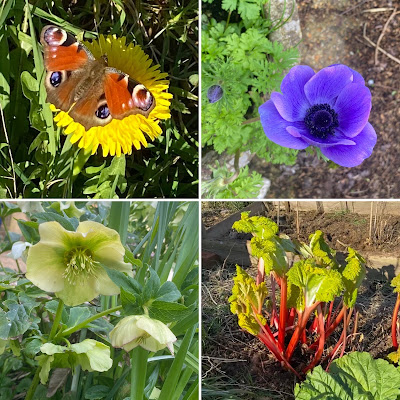 In the front garden, the tulips were just beginning to flower
Things were also happening in the animal world - frogs had been busy as there was now a lot of frogspawn in the pond.
And the worms in our wormeries had also been busy, producing lots of compost which I spread in some of the rasised beds.

I was beginning to lose track of what I had sown or planted - I had some scribbled notes but decided to get more organised and created a table:
Posted by John Austin at 11:20 No comments: