with clams, squid and prawns

Recently, I was watching Saturday Kitchen on TV and saw Jamie Oliver's Five Ingredients Recipe for a spicy pasta dish with 'nduja and clams.  Later that week our local fishmonger had a supply of fresh palourdes.

I don't know why a Sussex fishmonger uses the French name rather than call them clams (carpet shell clams to be precise). Jamie uses the Italian, vongole.  In Spain we know them as almejas.

'Nduja seems to be the trendy new ingredient and seen on a number of bar menus recently. Its a soft, spreadable spicy italian sausage flavoured with paprika.  I suppose the Spanish equivalent is sobrasada, a sort of spreadable chorizo.  I had neither, but I find ordinary chorizo picante excellent with seafood so used this instead.  I am a great fan of clams but Sylvia prefers prawns, so with inspiration from Jamie, I put together my own mixed seafood dish with clams, squid and prawns. 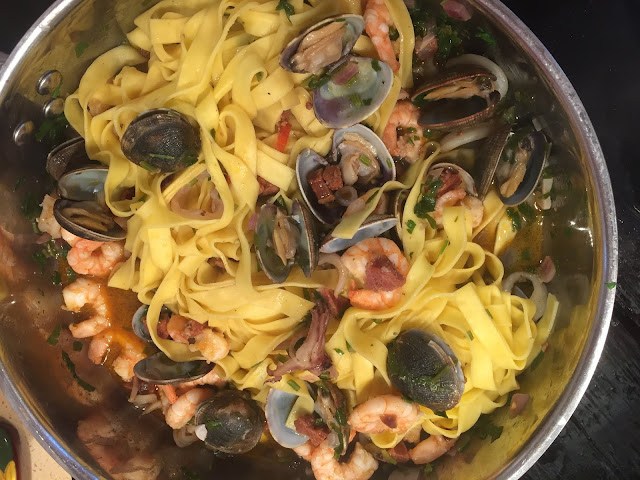 Method:
If you are not using the clams immediately, take them out of any plastic bag or container they were bought in and keep in the refrigerator in a bowl or colander with a wet towel on top or loosely wrapped in damp newspaper in the salad drawer of your fridge until needed.  Some say they can be kept for a day or so but I wouldn’t  leave them for more than a few hours. Do not leave them in a bowl of water or ice as they will probably die.  When needed, rinse thoroughly under running water.  If they have been bought from a supermarket or fishmonger they will almost certainly have been purged but leaving them in running water in the sink for up to 30 minutes just before you cook them will probably remove any remaining sand or grit.  (Some recipes suggest adding oatmeal to the water for the purging process but there seems to be no evidence that this is necessary or effective). Inspect the clams and reject any which have broken shells and any that are open or not tightly closed and won’t close when tapped.

I used three pans - a frying pan, a sauté or frying pan with a tight fitting lid and a large saucepan.

In each frying pan, gently soften half a chopped small onion in a little olive oil over a low heat, then add 1 clove of chopped garlic to each, continue frying gently until softened.   Set aside the sauté pan.

Finely chop the chorizo, and slice the red chilli and add these to the frying pan and fry gently to extract the oil from the chorizo.  Add the squid, cut into rings plus the tentacles and chopped wings and fry on high heat, stirring for 2 minutes.  Turn down the heat, add the prawns and fry on a gentle heat till they are just turning pink and partly cooked. Turn off the heat and set aside.  Cook the pasta in boiling water in a large saucepan according to the instructions – usually about 4 minutes.

In the meantime, add half of the parsley, chopped, including the chopped stalks, to the sauté pan, add a small glass of dry white or rosé wine (or dry Fino sherry or dry vermouth) and bring to the boil.  Add the washed clams, put on the lid, and cook for 3 minutes, shaking the pan until the clams have opened.  Take off the heat, inspect the clams and remove any that have not opened.

Return to the heat, add the prawn/squid/chorizo mixture from the frying pan, stir and simmer for 2 minutes. Add the drained cooked pasta and stir to ensure the pasta is well coated with the cooking liquid.  If there is insufficient juice, add a small quantity of the pasta cooking liquid.  Season with freshly ground black pepper and the juice of half a lemon, drizzle a little olive oil and sprinkle with the remaining chopped parsley and serve. 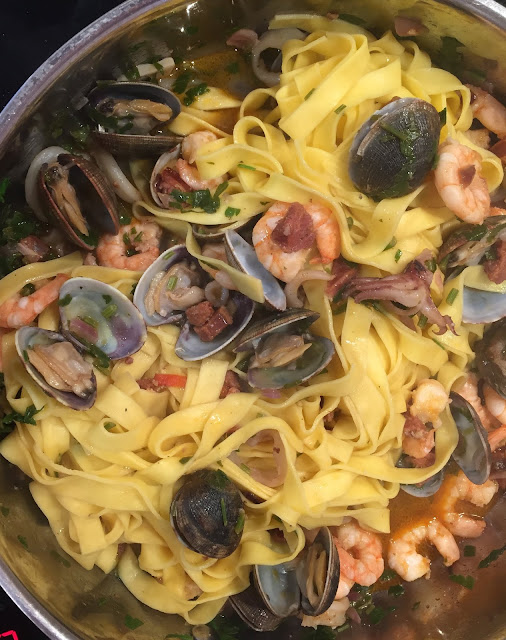 The Italians would describe this seafood pasta as blanco. With the addition of tomato at the cooking stage – some halved cherry tomatoes and a little passata – it would be seafood pasta rosso.   If you are adding tomatoes, use some basil in place of or in addition to the parsley.

STONE BASS - What is it?

Stone Bass - what is it?

On our first visit to Fishmekan in Hove earlier this year they had "Stone Bass" on the menu and Sylvi asked me if I knew what it was.  I couldn't recall exactly but thought it was a fish similar to the Grouper. Regrettably we didn't try it and it wasn't on the menu when we visited again recently.

After our first visit, I checked  to see if my memory was right - and it was (or was it?).  Nothing is ever simple with fish names as my blog on fish names shows

Stone Bass is an English name for Wreckfish which we had seen in Spain as Cherna and also under its Catalan name rascas (not to be confused with rascacio which is Scorpion Fish).  The Grouper family includes Grouper (Mero in Spain and Merou in France) and a variety of related species all called Grouper in English which include in Spain Cherne de Ley, Cherne Denton and Gitano.

The Grouper is highly esteemed in Spain and is also very popular in South East Asian cuisine. I had first been  introduced to Grouper in the 80s by my Vietnamese work colleague, Troung Tran, but later found it widely available in restaurants and markets in Malaysia and Thailand often steamed whole.

Grouper appears from time to time on English restaurant menus but I was surprised to see Wreckfish and did some further research.  Google Stone Bass and most sites will rightly describe it as Wreckfish but, intriguingly, not The Fish Society!  Their website says it is Meagre, one of the Croaker or Drum Fish.  I contacted them to find out more and they said that you would be unlikely to find Wreck Fish on menus in the UK as there was no market for it.  Alan Davison confirms this in Mediterranean Seafood saying that it is "not found in the eastern basin of the Mediterranean, and is not common in the market, as it has to be fished with a line and hook at a depth of 150 metres or so"

The Fish Society told me that it was not easy to find large sea bass that could be cooked as steaks but that Meagre were much larger and similar in texture and flavour to sea bass and could yield good steaks.  They informed me that if I saw Stone Bass on a menu in the UK it would almost certainly be Meagre.

The Fish Society is not what it's name might suggest, however. It is a wholesale fish merchant supplying many restaurants in the U.K. And on their website they say

So what is stone bass?

Dare we say it? Stone bass is, in fact, a ‘marketing’ name for a fish species called meagre from the Sciaenide family. You can understand why they didn’t think it’s normal name was that sexy can’t you? If you would like to learn more about meagre it’s latin name is Argyrosomus regius. Depending on where you are in the world you may see it described as salmon bass, shade-fish or even corvina.
Now Corvina is a fish that I am familiar with as we often have it in Spain when we have a large gathering and cook it whole as you might sea bass. I posted a recipe for Corvina in November 2016 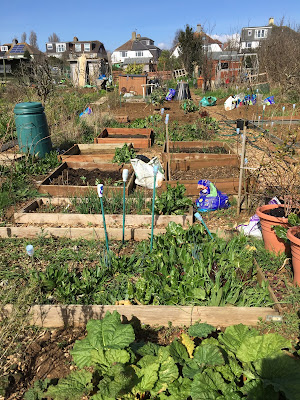