There were signs that winter was drawing to a close with the hellebores in flower in the garden at home. 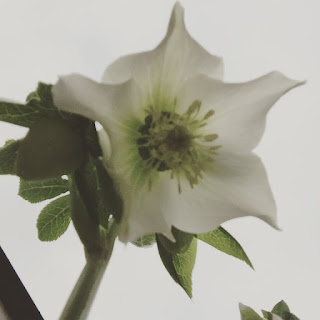 And we were enjoying the fruits of last summer/autumn - it was time to try the last of the stored squashes, a Crown Prince. This is one of the best squashes both for eating and storing (no wonder they only put 5 seeds in a packet for almost £2.50!)


The beginning of the month saw Seedy Sunday, an annual event organised by local volunteers, where you can swap or buy seeds from fellow plot holders and suppliers.  I fear I may have given in to temptation and bought rather too many seeds.

Amongst the seeds I bought were several varieties of chilli peppers, some of which I have sown in pots at home in the conservatory.  I have also sown some parsnip seeds in cardboard tubes, as they tend to develop long tap roots early in their growth. Unfortunately, however, they are notoriously difficult to germinate and some growers suggest soaking the seeds in tepid water overnight before sowing.  I will give them at least 28 days before trying again.

At the allotment, the soil is very wet at this time of year and and it's not a good time for digging but I felt I had to make a start in preparing the areas for early potatoes and brassicas as there are a lot of deep rooted and perennial weeds.

I have also made a start clearing the area around the pond where I will plant some ground cover plants and create a patch for wild-flowers as well as clear a sitting out area so there will be somewhere pleasant to relax during the spring and summer months.


I bought some organic mangetout seeds at Seedy Sunday harvested by the organic gardeners' group at The Weald so I am hoping these will do well.  These seeds are the round seed variety (not wrinkled) and are deemed suitable for sowing in wet autumn and winter conditions.  I sowed some indoors in pots on 2nd February. I also managed to get some more Aquadulce broad bean seeds at Seedy Sunday and also sowed these in small pots indoors in the unheated conservatory on 2nd February. 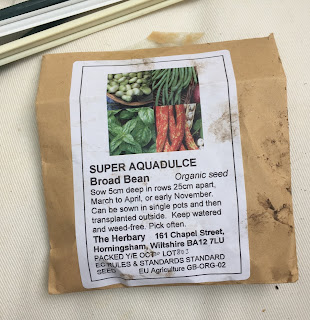 By 10 February they had germinated and some were showing through

I also prepared the 2nd early Nicola potatoes for chitting in old egg boxes and put them by the window in the garden shed alongside the Duke of York.


Storm Ciara struck around this time with lots of rain and gusting winds up to 60mph.  Fortunately we sustained little damage, but a near neighbour lost their fruit cage which had blown over several plots until stopped by the fence where the allotment adjoins Hove Park School.
Our immediate neighbour had built a greenhouse last year with a wooden base and acrylic windows - storm Ciara had manage to overturn it
Few of the polytunnels on site survived!  But despite the winds all our crops seem to be intact - although the broad beans and the broccoli are at a rather jaunty angle and may need staking or tying up.

I also made a half-hearted attempt to clear some more weeds from the potato patch but the ground was so wet, I soon abandoned it.

I was able to harvest some of the remaining kalettes which have been a great success.


By the middle of the month, the broad beans at home were doing well and really needed to be hardened off outside, but after Storm Ciara, Dennis was on the way!  I wasn't sure that the beans were ready for a battering, so they stayed indoors.

Despite storms Ciara and Dennis we had crocuses and anemones in addition to the hellebores to cheer us up in the garden at home.


And the early daffs were out and the Camellia just coming into flower.  Camellia's don't thrive on our soil - like the blueberries they require an acid soil.  When planting I dug a hole and filled with ericaceous compost and I mulch the plants from time to time with more but in the growing season I also water the plant including the leaves with a liquid ericaceous feed. I must remember to do the same for the blueberries. 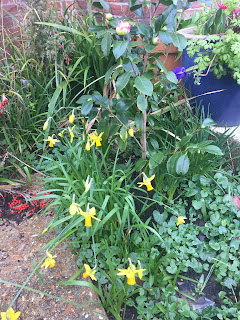 Braving the elements, I ventured to the plot on 18 February with vegetable scraps for the wormery.
The worms are very efficient in breaking down the vegetable matter to produce good compost and the run off, known as Worm Tea, is a great nitrogen rich liquid fertiliser (which needs to be diluted before being applied).

Towards the end of the month, the broad beans sown in the open in the autumn were beginning to flower.  This brought mixed feelings - one of joyful anticipation of a good early crop but also of fear of a sudden frost which could undo all the hard work.


With the passing of storms Ciara and Dennis (and before the arrival of Ellen), I decided to plant out the current crop of Aquadulce sown at home as they were getting rather leggy.


This late February visit to the plot revealed that the purple sprouting broccoli was beginning to sprout.


Pigeons had begun to peck at the tender top leaves but thankfully, all the heads were intact.  I had not covered or protected the plants and with all these strong winds I don't think any netting or fleece would have survived.  The wind had managed to lift all the netting from over the redcurrant bushes in my fruit cage despite being well secured with clips.

I folded some of the larger top leaves over the flowering heads in a probably vain attempt to hide them from the birds.

Well it worked for a couple of days!  But I didn't want to take any further risks, so I picked the main heads which will encourage the side shoots and they were absolutely delicious. English early purple sprouting broccoli is one of the best vegetables ever.


The weather this month has been absolutely atrocious, although in the south east we have fared much better than those communities in the Wales and the north of England and the Midlands where there has been severe flooding as major rivers have burst their banks.  We have had so much rain and high winds here - with the pebble beach blown several feet upwards on to the promenade - that we have made few trips to the allotment.

And when we have, the ground is so waterlogged it is difficult to dig - you just get stuck in the clay mud with heavy boots which are difficult to lift.  We did make one final excursion though on Saturday 22nd and despite the strong winds, and with the help of Luke, did manage to dig up half of the raspberries, remove the couch grass from around the roots, which was entangling them, and replant the canes. But after an hour and a half enduring the wind and increasing drizzle abandoned the task and this was our last visit of the month.


There were however some tasks that could be carried out at home.  On 21 February I sowed some kalettes in seed trays in the unheated conservatory.  I also sowed some leeks.

I said that I had gone a little crazy at Seedy Sunday and had bought rather a lot of chilli pepper seeds!  The ones I sowed this month are:

The numbers, as given on the packet indicate the heat level on the Scoville scale which is a measurement of the pungency (spiciness or "heat") of chili peppers  recorded in Scoville Heat Units (SHU) based on the concentration of capsaicinoids. 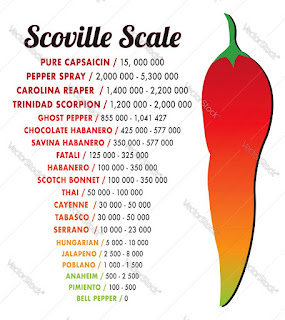 I have more which require later sowing!

On 28 February I also sowed some more leeks and some early ripening baby plum tomatoes and an early bush variety of cherry tomatoes.

I had intended a last visit of the month but this idea was abandoned with the arrival of Storm Jorge!  After Ciara and Dennis  we had been expecting Storm Ellen but she hadn't been officially named when on 27 February, the Spanish authorities named Jorge and the Met Office has gone along with this.  Jorge is predicted to be less windy than Ciara or Dennis but much colder!