Thursday 7 October was forecast to be sunny with no rain but there had been heavy rain overnight and the morning was overcast.  We had planned a long day at the allotment but instead we spent most of the time in the shed, sheltering from the fine drizzle and left earlier than intended.
The snails seemed to appreciate the wet weather! 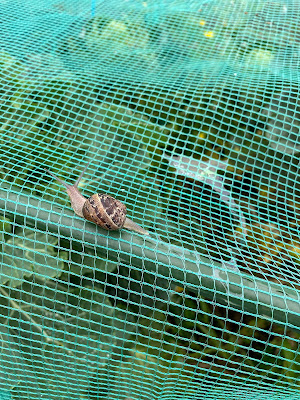 I watered it well and left it a few days to settle.
The stem of one of the Crown Prince squashes had dried off and as rain was predicted we thought it was time to harvest it. Crown Prince squashes store well.
On 11 October, after a few days of heavy rain, work resumed on the first Hugel bed by putting a layer of wood chippings and prunings down folowed by a layer of cardboard which, hopefully will keep any deept rooted weeds, like bindweed, from coming through.

The Hugel beds were all part of my "no dig" plan.  It seems there is an awful lot of digging to get them started though!  Still I'm told they should last for 10-20 years.
On 17 October we returned to our first Hugel bed. We had constructed a rough frame from some old pallets and after adding another layer of wood chippings on top of the cardboard and soil we were almost ready to start returning the rest of the soil that had been dug out.
As a relief from the hard labour, we harvested some of the padron and chilli peppers...
....and lifted a Swede (or for my northern friends a turnip!)
On 19 October, I was delighted to see the first sign that the broad beans I had sown at home were beginning to germinate. 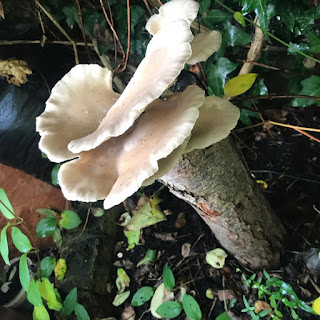 24 October was a pleasant Sunday with clear skies, Sylvi spent most of the time riddling the pile of soil that had been removed from the first trench and I was able to use it to begin topping off the bed.  I wanted 4-6inches depth of topsoil on top of the wood chippings.
We also laid cardboard around the perimeter of the bed as a weed suppressant....
...and then covered this with wood chippings.
On Monday, 25 October I cleared some old logs from behind the shed at home.  They were too large to fit in trench number three on the allotment, so it was a job for the chainsaw.
The following day, I transported the logs to the plot which was beginning to look a little untidy.  The foliage on the pumpkins and tromboncinos had died back so I will harvest them before Halloween.
26 October The third hole I had dug was ready to receive my logs

I covered the logs with brushwood and twigs and thin branches from earlier pruning of apple and plum trees (making sure they were dead - I didn't want plum trees sprouting) and then covered this with a sackful of shredded paper.
The paper will retain moisture and eventually rot down.  I then covered the paper with any available green material including the dying down courgette plants and lower leaves removed from the chard and kale.

The pumpkins were too heavy to carry - they are called Quintal which means a hundredweight.  They were not quite that big but the largest did weigh 2 stone! (12.7kg) So I had to bring the car round to get them home.
Safely home and lots to share with family and friends
October had been a very active and productive month.