The month started well. Thursday 1 July was a bright sunny day with temperatures in the 20s, slightly cooler on the following day but the Saturday was mainly overcast with occasional sunny periods and then the rain showers arrived for Sunday.
At home the paeonies had finished but many of the roses were blooming and the hydrangea was just breaking into flower. 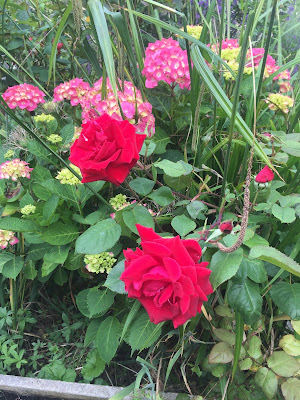 At the plot, the American landcress, sown in an old recycling box, was beginning to grow.

On Friday 2 July, at home, I spotted my first tomatoes on the container grown plants.

Some woodchip/prunings had arrived on site so I thought this was a good opportunity to remove the perennial weeds from the footpaths and do a bit of repair and general tidying up.  Sylvi spent her time removing the bindweed, brambles and plum suckers that had invaded our old glassless greenhouse.  Our intention is to reglaze it (eventually!)

Saturday 3 July was overcast and cloudy  and I spent the morning indoors bottling the rhubarb gin that I had started 4 weeks previously.
Later in the day there were some sunny periods and I spent some time on the plot.  I was able to pick some raspberries.  In our min-greenhouse the aubergines, tomatoes and peppers had outgrown their pots so I transferred them to larger ones and took the risk of putting them outside.
The Blueberries which are growing in large pots inside a fruit cage had become engulfed with weeds so I removed the netting to clear them, gave the blueberries some slow release ericaceous feed and replaced the netting.
The cucumbers were doing well and beginning to show signs of flowers. Unfortunately they didn't seem to want to climb up the frame that I had provided, so I tied them into the frame to give them a bit of encouragement.
At home the beefsteak tomatoes were looking encouraging.
And on the plot the tromboncinos were growing well.

I lifted the garlic as the leaves had now died back, but some of the cloves were rather damp as a result of all the rain we have had.  We desperately need some sunshine for them to dry off.
There were also signs that the pumpkins were beginning to swell!
On Thursday 8 July we went off on our first real outing since the pandemic started in March 2019 to visit my nephew in Pagham, West Sussex, who we hadn't seen for almost two years, and we had our first visit to a pub in 16 months! We had a great meal in the garden at The Gribble Inn in Oving, near Chichester - I would highly recommend it.
The weekend saw glorious sunny weather.  My near neighbour on the site, Maggie, gave me some more aubergine plants - they were the same age as the ones she had given me earlier but were much smaller.  I repotted them in larger pots but decided to keep them in the mini-greenhouse for a while to re-establish themselves.
Here's a comparison of size between the earlier ones and those I have just been given.
The garlic that I had lifted earlier was lying in the sunshine in the garden at home to harden off.  But Sunday evening, 11 July, saw storms and heavy rain which persisted into Monday.  We were very lucky that the storms did not cause any serious damage locally, whereas other parts of the country were not so fortunate. West London saw four weeks' rain fall in a couple of hours causing flash floods and parts of the London Underground were closed due to flooding.  My garlic was rather damp though, so I I had to bring it indoors to dry off.
The yellow pumpkin had grown in size in a week from a tennis ball to a football
Fine weather returned on Tuesday 13 July with clear blue skies and the temperature back in the twenties.  The kalettes had outgrown the netted cage I had constructed with blue water pipe so I took the opportunity of reconstructing it to make it higher.
I also planted out patty pans & more pumpkins in the raised beds where the broad beans had grown, topping up the beds with more organic matter.  With a heat wave forecast, I was pleased to see that the water supply had been restored. It had been cut off for several weeks to repair leaks.  Fortunately I have three large water butts which saw me through the cut-off period.
I harvested several courgettes which would have become large marrows if left.  I was also pleased that the Swedes which were now uncovered had not been devastated by pigeons.
I lifted the remaining row of first early potatoes (Duke of York) and planted out some more purple sprouting broccoli where the potatoes had been, adding some pelleted poultry manure to the soil.
There was no sign of any dwarf French beans where I had sown them a couple of weeks earlier.   I had used some old seeds from 2020 - so I bought some new ones, green and purple, which are suitable for late sowing and on 14 July sowed two patches in raised beds.
It was good to see the blue skies and get out in the sunshine.  After the June drop there looks to be a good crop of plums and hopefully they will ripen next month.
The sun has brought on the sunflowers which grow taller every day.
The landcress is doing well and almost ready for picking.

Temperatures are near seasonal averages and on 16 July  reached 23C which was good news for the tomatoes.  Those grown in containers at home were in advance of those on the allotment and we had our first picking of cherry tomatoes from the garden.
On the plot we harvested some dessert gooseberries, blackcurrants and raspberries.

The cucumbers and climbing beans were also doing well.

I checked the beetroot (Boltardy) and was pleased to see that they were ready for lifting.

The warm weather continued and on 17 July I inspected the tromboncinos. They had needed a bit of encouragement and help in climbing up the frame I had made but at last they were getting the idea.
As we were about to go away for a few days we decided to take most of the potted plants out of the mini-greenhouse as I thought they would suffer if the hot weather was to continue.  A mini-heatwave was forecast.

Nasturtiums are in full flower and looking very attractive...
... but they're not grown just for appearance; they are very beneficial for other plants including the cucurbit family - squashes, courgettes, cucumbers as well as tomatoes, and brassicas.  They form good ground cover for beneficial spiders and ground beetles and for deterring weeds.  They are also useful "trap crops" attracting blackfly and cabbage white caterpillars (keeping them off my beans and cabbages) which can then be easily spotted and dispatched.  And of course the flowers and the leaves are edible - a tasty addition to salads in lieu of watercress. And the seed pods can be pickled and used instead of capers.
There is never a good time to go away in the summer, from an allotment point of view, but we risked it before the school holidays to avoid the crowds and the hike in prices.  We arranged for Luke to keep a watching eye and to water if needed, both on the plot and at home and, with fingers crossed, set of on 19 July.
During the early part of our absence, Luke's assistance was needed as temperatures soared without any rain but then, just before we returned, there were heavy showers.  It was good that Luke was there, however, to pick the plentiful supply of courgettes before they became giant marrows.
We returned on 28 July.  The temperature was still fine for the time of year, with lots of sunshine but with the return of gale force winds.  On our return home we were treated to a wonderful display of summer flowering bulbs in the front garden.
And there was a beautiful display of wildflowers on the plot next to ours

Everything was looking good.  The pumpkins had obviously benefitted from the combination of sunshine and showers.

There was still a plentiful supply of courgettes and I was also able to harvest beetroot, and runner beans.

There was also a lot going on in the kitchen at home as we had brought back lemons from Spain. At 60cents a kilo we just couldn't resist!  So there was a spate of marmalade making and baking.

And we found a use for some of the courgettes in a delicious courgette and lemon drizzle cake
But on the evening of 29 July disaster struck with 60 mph gale force winds. We wondered what damage this might do. A visit to the plot the following day confirmed our worst fears - the mini-greenhouse had not survived!

The pots containing tomatoes, peppers and aubergines had also been blown over or the greenhouse had fallen on them and some of the tomato plants were damaged.

The winds continued into 31 July causing wind-burn to some of the plants and breaking others.  Miraculously, some of the sunflowers had survived.
We did manage to pick some landcress, lift some spring onions and pick some beans.

And we took home the damaged sunflowers, hoping to dry the seeds either for consumption or to grow next year
The sunflowers brought a little bit of sunshine into the house on a very gloomy weekend.  Hoping for some better weather next month.