At the beginning of the month we had a supply of locally picked medlars given to us by a friend and fellow plot-holder.  They cannot be used as they are when picked, but need "bletting" (left to ripen/rot a little).  You can find details of bletting and medlars here
We will probably make Medlar Jelly once they have bletted.
On 3 September we were greeted by a new flowering water lily.
We also had a large supply of plums, so 3 September became baking day with my own version of Pflaumenkuchen (plum cake)

With a plentiful supply of patty pan squashes there was an opportunity to have them stuffed and roasted.
At home, the tomatoes have been very productive and we have had daily pickings. they are still looking good and more fruits are setting.  We are hoping for some sunshine to speed up the ripening of these later arrivals.
August is supposed to be the last month for sowing beetroot but with global warming I decided to sow a couple of rows this month together with some perpetual spinach.  Even if we don't get beetroots we should at least get some salad leaves.
Despite the heavy winds there are still a few plums on the tree and on 6 September we picked some as well as rather a lot of cucumbers (Spanish pepino variety) and some very large courgettes!

We have also been picking kale almost every day.

And we picked our lone Blue Ballet squash, similar in colour to a Crown Prince but a different shape.

Our rhubarb was prolific, still pink and not stringy, so we thought we would use some to make rhubarb gin.
In addition to the kale, we had a good supply of chard
Some of the chillies seemed ready to pick.  The Hungarian yellow wax are mild and suitable for stuffing and the hot wax and purple cayenne, which are medium hot, should turn red when fully ripe can be used whilst still green or purple.
We also harvested a butternut squash - perhaps not yet ready for storage but fine for eating.

Although we fared better than the rest of the country, September has been wetter than usual and very unsettled with temperatures below average. On the night of the 12 -13 September, Storm Aileen arrived hitting Wales and central England hardest with 74 mph winds but, even in the southeast, winds were 50-60mph with most of the fruit left on the trees, finally dropping
After months of wind damage, next door's fence finally came down at the beginning of the month, giving us a great sense of space in the back garden
The new fence is now up but needed treating with wood preservative, so I took advantage of a few dry days to treat it.  It reminds me that the workshop in the garden and the shed on the allotment need attention too!


Mid-September and the plot is still giving, including some fine beetroots.
On 19 September we caught sight of some damsel flies.  Sadly, I didn't catch a picture of their courtship/mating, which is a shame because they make such interesting and beautiful shapes. 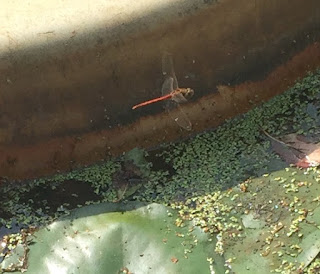 Our wormeries are doing fine.  They produce a regular supply of "worm tea"  which, when diluted, makes an excellent, nitrogen rich, liquid feed. From time to time, the bottom tray can be removed and the contents, which are a rich compost, can be spread on the beds. The wormeries take care of all our vegetable kitchen waste.
The compost is rich in worms, most of which get put on the beds with the compost but we reserve some to add to the new trays of kitchen waste in the wormery.
On 29 September we harvested the unknown squash which should have been a tromboncino (and clearly isn't) and we have another similar one growing elsewhere on the plot so at some stage some seeds or plants must have got mixed up!  I do not know what variety this one is.
In view of the deterioration in the weather and frequent rain I decided it was time to harvest the butternut squashes and the Crown Prince.  We will keep them indoors for a few days for them to dry out and ensure there is no moisture in the stems before storing an a cool place.
My Crown Prince squash was way smaller than my neighbour's but did weigh in at a creditable 2.5kg

As September comes to an end, the weather is very autumnal, but also unsettled. We can expect more storms in October so we will really have to prioritise tasks as fine days for working on the plot may be few and far between.
John Austin
Hove, September 2020
Posted by John Austin at 10:01