OUR ALLOTMENT - Life on the Weald September 2018


Our allotment - Life on the Weald September 2018

As expected, I did encounter a delay at security at Gatwick airport in August as I had packed one of my oversize courgettes to take to Spain.   Sure enough it caused some queries on the x-ray screening and I had to open my case.  "Oh is that your prize one?" asked the security officer. "No," I said, "the prize one wouldn't fit in the suitcase".  I presume that once we have Brexited; it won't be permissible to take an oversize courgette into Spain and I won't be able to bring more than 2kg of lemons back!

On my first September visit to the allotment on 5th, one of the first things that I noticed was the pumpkin which had more than doubled in size since mid August.

It was a plant that I had bought at the allotment holders' sale in Portslade and I'm not sure what variety it is.

I also noticed the plums which looked good, but unfortunately most were diseased and grainy inside.


The rest of the plot looked fine.  There were several courgettes of reasonable size...

...and a plentiful supply of runner beans, French beans and cucumbers.
The purple kale was coming along nicely......

...and the leeks looked healthy but in desperate need of hand-weeding!

The late peas were also looking very healthy and will possibly be ready for picking at the end of the month or early October.

We avoided growing tomatoes on the allotment in view of past year failures and instead grew several varieties in pots in the garden at home.  It was a very good decision and we have had a very successful crop. 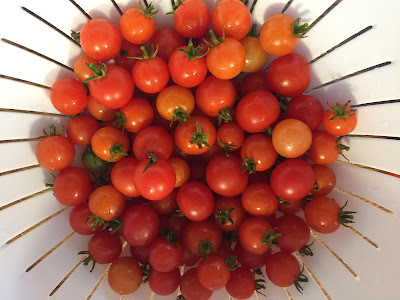 The leeks and the kale certainly looked a lot better after a spot of hand weeding.  It's hard on the knees but hopefully with a bit of hoeing we can keep the annual weeds at bay although we will face the constant battle with couch grass, bindweed and brambles.


Spinach and chard are naturals on our patch and love to self seed all over the place. Once they have taken hold I'm reluctant to pull them up so we have a surfeit.  We eat it regularly, we feed family and friends - and we have a freezer full!

It's almost possible to actually see the pumpkin growing and I hope it doesn't suddenly explode!


We are still harvesting courgettes and carrots and there are still a couple of cucumbers.


Always thinking of new things to do with courgettes, I found a recipe for a courgette puree made principally from the skin....
...which I served with some pan fried fillets of John Dory


We had a reasonable crop of chilli peppers this year, grown in pots in the garden at home and in the conservatory.
This is my second crop of chillies and these will go the same way as previous ones - straight into the freezer so they can be used as and when needed (I still have some frozen habaneros from last year which I rarely use as they are too hot for most people).

My son, Damien, seems to have had a better crop than me this year, grown in a pot in his garden in SE London.


Not the freezer for Damien.  He's a bit of a purist and has threaded his to hang them up to dry as they do in Spain, southern Europe and South America


A few last minute rushed jobs as we will miss the last weekend of September as we'll be at the Serpentine open water swimming to cheer on Sylvi's nephew, Matt, and then we are off to the States and Canada for three weeks and won't be back until mid-October!

We have tided up the area near the shed where the wormeries are kept and cut back the brambles and it is looking much neater. 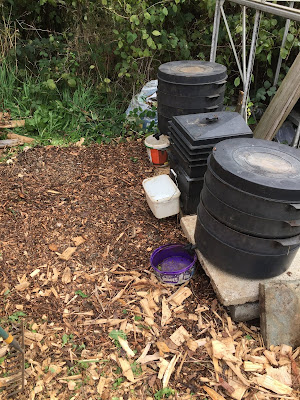 We have also emptied the bottom trays of the wormeries into the raised beds where the onions and garlic will go later this year.

There were certainly plenty of worms! 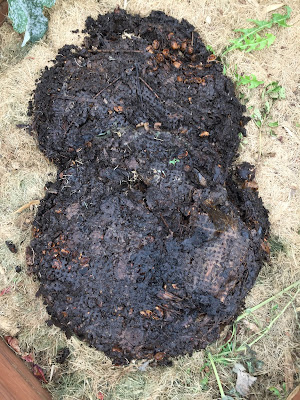 I have covered the compost from the wormeries with a layer of grass clippings from the lawn at home and covered that with some riddled soil rescued from the couch grass dug up last month.  I will dig all this in when we get back next month. 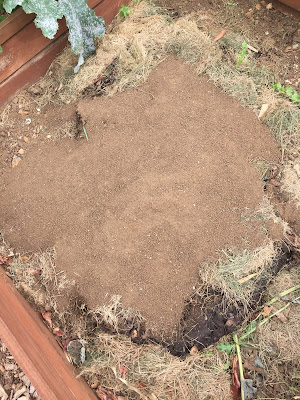 I lifted the last  remaining row of the Nicola potatoes and planted a new double row of leeks where they had been.....


...tidied up around the pond and then took a last fond look at my pumpkin which I hope will still be there in October!

And headed off to San Francisco.