OUR ALLOTMENT - Life on the Weald August 2018

Our allotment - Life on the Weald August 2018

As if there were not enough distractions to keep us from the allotment in July, this month proved even more problematical.  Our visitors left on 1st August only to be followed at the weekend by our nephew, Niall and his partner Emily and it was Pride weekend.

I did manage a trip to the plot on Sunday 6 August, only to find that some of my courgettes had become giant marrows! 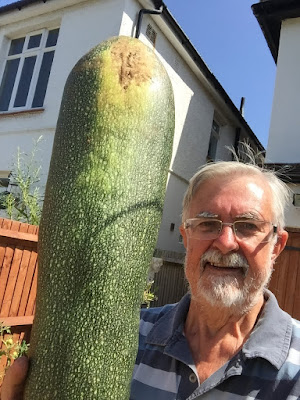 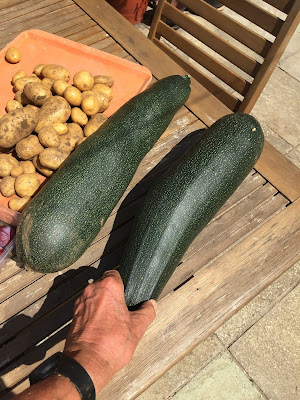 But I was able to harvest some potatoes.  I lifted the last of the Vivaldi and a few of the Nicola, second earlies, which appear to have escaped any infestation. 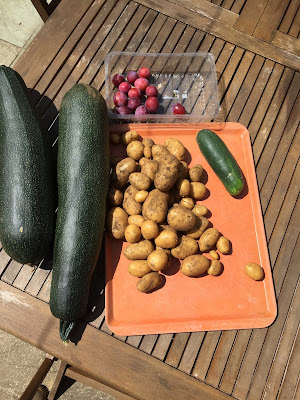 I also harvested a few plums but I'm afraid that the plum trees are infested with a fungus and the fruits rot before they have ripened.  I am not sure there is a cure but I will need to seek some advice.  The few that had escaped infestation were quite delicious. 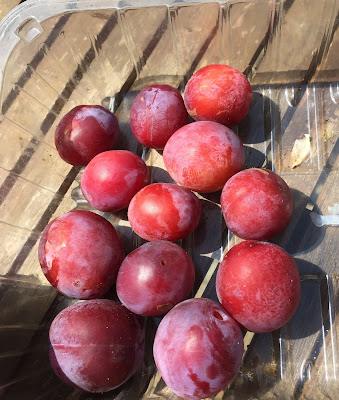 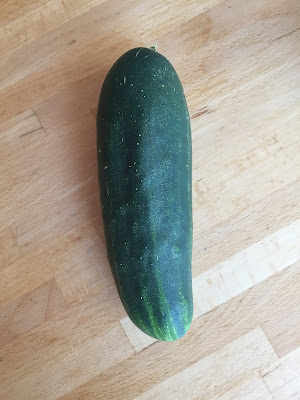 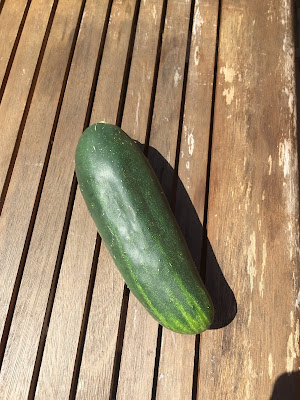 I also began lifting the onions.  Unlike the shallots and garlic they had survived the drought well. My intention was to leave them to ripen a little longer in the sunshine which we have been experiencing but regrettably, later that week we had torrential rain.

Apart from the rain, another distraction from the allotment was the preparation of favours for our niece, Adele, who was getting married on 11 August.  We had promised her some of last year's Sloe Gin  which we carefully decanted into miniature bottles and also last year's apple jelly, which had to be labelled. 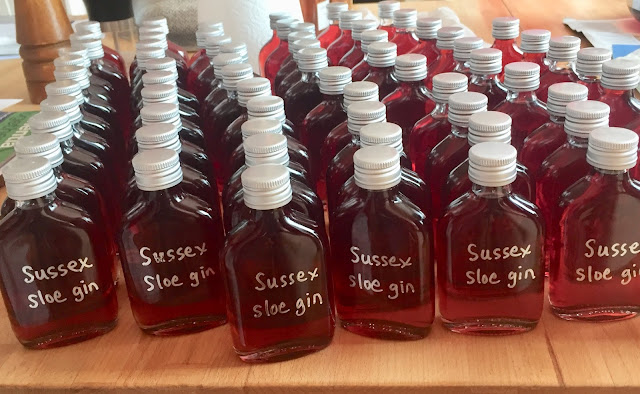 And of course we had to be away in Sheffield for the whole weekend for the wedding, where I had been "volunteered" along with my daughter-in-law, Nicole, as official photographer!

On my return to Hove, I was able to spend a couple of days at the allotment, lifting some more of the Nicola potatoes. There is one 10ft row left to lift.

At home, in the herb garden, the Asian garlic chives and winter savory were in full flower and very popular with the bees.


I have planted some garlic chives on the allotment, grown from seeds harvested last year, and am hopeful they will be as successful there as in my garden.

I will think about taking some cuttings from the savory to grow on the allotment too, to encourage more bees.

I also managed to clear an area to plant out some late leek plants from the plugs I had bought at the garden centre and to prepare an area for a row of kale.  I dug over the area and removed as much of the couch grass and bindweed as possible and the annual weeds; raked in some fish, blood and bone fertiliser and then top dressed with some compost, watered and well trodden down and then left for a couple of days.


We have given away several marrow size courgettes to friends and neighbours and shared ideas what to do with them.....

....we have tried them spiralised in many dishes.... 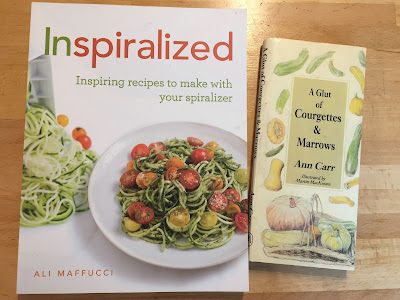 .... including my Asian Cod recipe 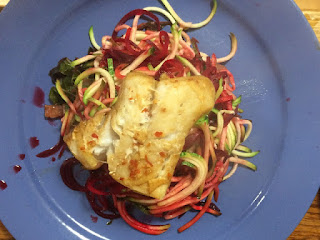 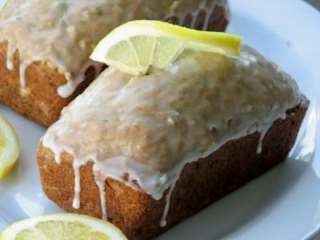 If you have a recipe for carrot cake, just use grated courgette instead of carrot - it will be a wetter mixture so you may need to add a little more flour.

We have harvested more cucumbers. We have given the pumpkins and green crops a good feed with liquid manure from the wormeries.

In a spare space between the peas, I have planted some more beetroot seedlings and hopefully they will crop by late autumn, early winter.


One of our favourites - the cavolo nero -  has not disappointed and it looks like we will be picking this well into the autumn. We have had several pickings already and are keeping a watchful eye for any evidence of caterpillars....

...and I have planted out some purple kale plants bought from the garden centre.

Some hand weeding was needed around the leeks which had been planted out in recent months and they are looking healthy and I have top dressed them with some compost. 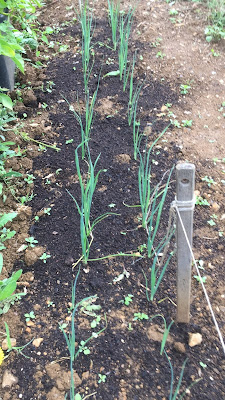 I planted out more leeks in the area which I had prepared a couple of days earlier.  Here's the method.

Water the area well and leave to soak in; tread down well to get a firm planting area. Make a hole with a dibber about 6 - 8 inches deep. 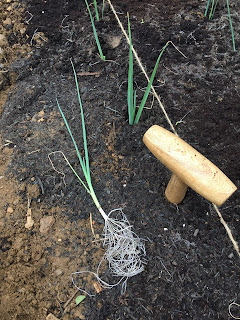 Carefully withdraw the dibber making sure soil does not fall back into the hole. 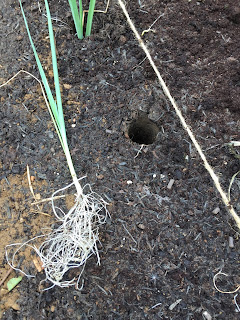 Drop a young leek plant into the hole 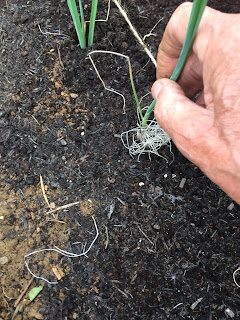 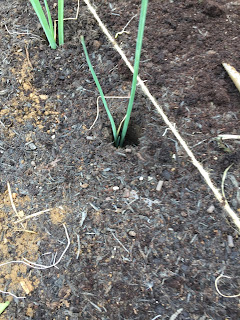 Carefully fill the hole with water.  Water daily for the first few days.  The leeks will expand within the hole which gradually fills up with soil. 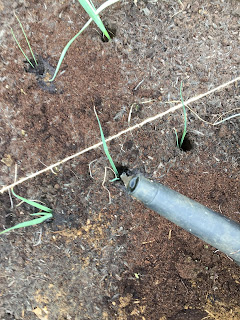 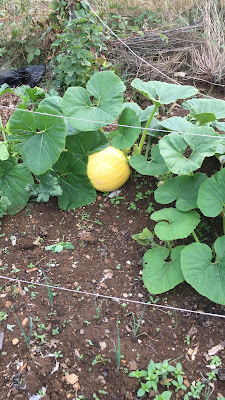 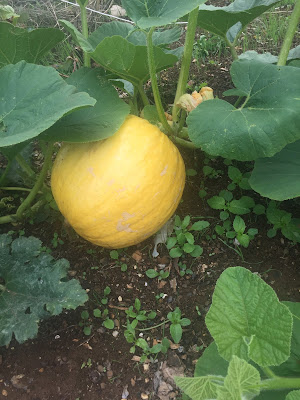 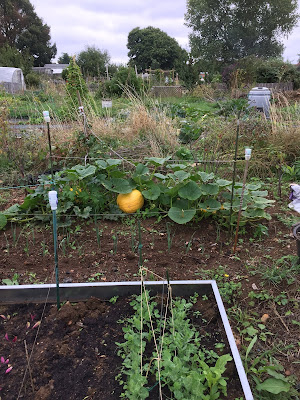 I had planted one pumpkin between two rows of climbing French beans but it seems to have taken over the raised bed! 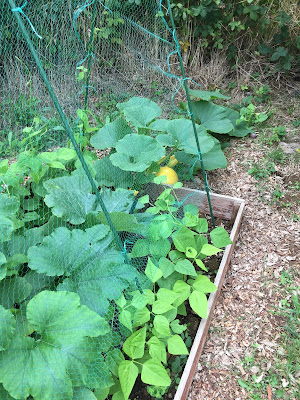 The torrential rain in mid-August was not helpful to the onions which were just hardening off.  We have now lifted all of them and are able to store most, but a few were soft and we decided not to risk them rotting in store.  We peeled them, removed any damaged parts, roughly chopped them and have frozen them in small packages in the freezer.  They can be used when needed by just adding to soups, stews etc. 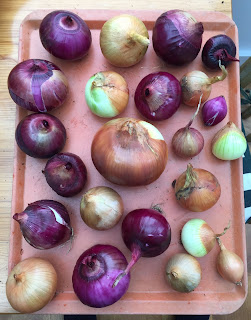 The largest brown onion, centre stage above, was 4.5 inches in diameter and app 14 inches in circumference!

The red onions were such a beautiful colour, they deserve a picture on their own

We also have a proliferation of spinach and chard.

On my last couple of days in August - around 18-19 - we were able to harvest some French beans and carrots as well as chard, courgettes and cucumbers...... 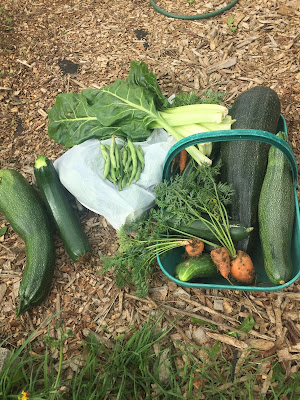 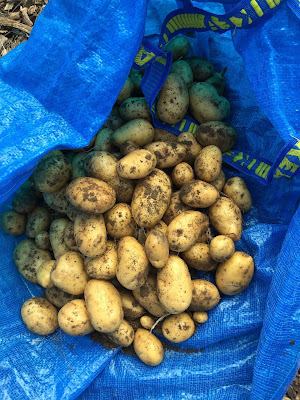 But just as we have this major harvest, it is time to go on our summer holidays.  Having given away as much as we could we have asked our neighbours on the site to help themselves to anything which they think will not last well until we return in September 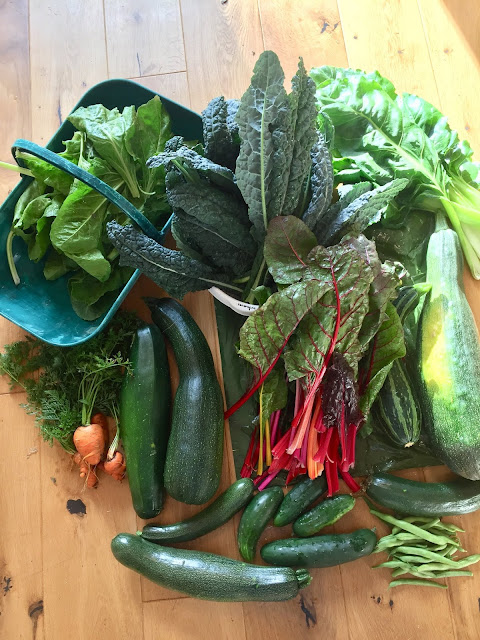 Just off to Spain to celebrate my 74th birthday - and of course my courgettes! (Hope I don't have too much trouble at airport security).