I called in to Kevin’s on Tuesday.  I was tempted by the Brill, which is one of our favourites but he had some fresh gurnard which I couldn’t resist.

We are fortunate in living close to Shoreham Harbour where there is a branch of FISH so we can always get freshly caught local fish as well as varieties from further afield.  We are also only a short drive or cycle ride from La Poisonnerie or I can cycle along the Hove front to the Fish Shack on the beach for fish straight off the boat - but the best kept secret is Kevin's in Richardson Road, a traditional, independent fishmonger, a few doors away from an independent butcher and opposite a small bakery and an abundance of coffee shops.

Kevin’s has no frills.  It is a basic, old fashioned, traditional fishmonger’s where Kevin will advise you and prepare the fish however you want it. On the wall he proudly displays his certificate for his entry in the Guinness Book of World Records for winkle-picking! Kevin also sells home-smoked fish "no junk" added!

Normally I would buy whole gurnard and roast it in the oven but these were large specimens which would deliver two generous fillets and Kevin was happy to oblige. 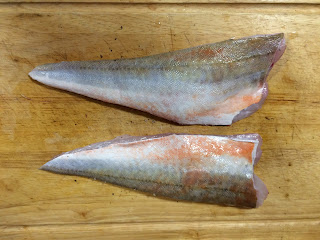 The gurnard is often described as an ugly fish (not to another gurnard obviously) but I prefer to describe it's appearance as striking. It is an excellent addition to bouillabaisse or fish stew but the flesh has an excellent flavour on its own.  It has a firm flesh and will go well with strong flavours such as mushrooms.
I consulted several recipes which gave me some ideas for combinations of flavours and here is what I came up with.

Season the fillets with salt and pepper.  Lightly dust the skin side with seasoned flour. 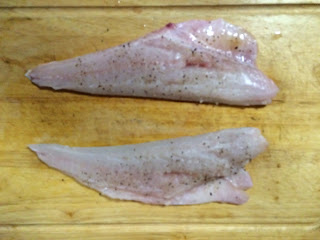 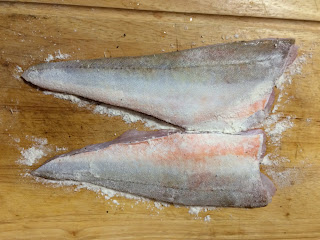 Heat the oil in a large frying pan and add the fillets skin side down and cook until the skin is crispy (about 3-4 minutes). 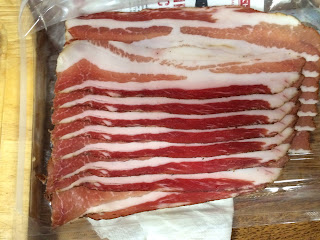 Add the pancetta, chopped, turn the fish flesh side down and fry for another 2-3 minutes (or until the flesh is firm and flaky) then remove and keep warm.  Continue to cook the pancetta until crisp, then  drain and keep warm with the fish.  Drain the remaining oil and wipe the pan. 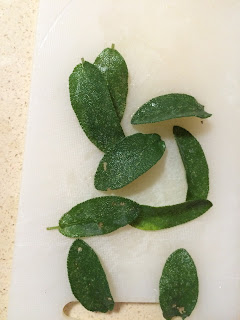 Add a knob of butter, chopped garlic and 6 fresh sage leaves and fry gently (do not allow the butter to burn) until the sage leaves are crispy then remove.  Add the juice of 1 lime or lemon to the pan and stir.

Place the fish on serving plates, skin side up with the crispy pancetta, spoon over some of the juice from the pan and decorate with crispy sage leaves.

I'm not a fan of smears and drizzles i.e. so-called fine dining.  I'm more of a rustic/peasant chef and I never understood why fine-diners and posh restaurants stint on the veg. I served this with broad beans and a generous helping of mashed potatoes. 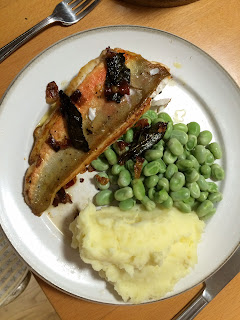 I added the chopped peel of half a preserved lemon to the mashed potatoes which is excellent with fish.   I thought the combination of flavours was fine, although my wife thought the pancetta added little  - but we both agreed that the fish was absolutely fabulous. Thank you Kevin.