The family of sardines and herrings

On a recent visit to the fish counter in an Eroski* supermarket in southeastern Spain I spotted what I thought to be sardines but they were labelled alacha. They were very similar to the sardines (sardinas) on the same counter.


I learned later that alacha are in the same family (Clupeidae) as sardines. The true sardine (Sardina pilchardus) is simply called sardina in Spanish.  I also learned that alacha are found in UK waters as well as Spain and Portugal and known as gilt sardine (Sardinella aurita). Alacha should not be confused with alatja, which is the Catalan name for shad, another fish in the sardine family (see below).

It is a popular misconception that sardines and pilchards are different kinds of fish. They are not. Sardines come in a variety of sizes up to about 27cms and in the UK we generally call the smaller ones sardines and the larger ones pilchards.  In Cornwall, however, there is a growing trend to call all sardines “pilchards” irrespective of size and a Cornish fisherman will tell you that Cornish pilchards are the finest in the world.  I dare say this would be disputed in Galicia and a few other places too.

Not only do the Spanish have a plentiful supply of fresh fish, they have a passion for preserving and canning.  In England we often think of tinned goods as the bottom end of the market, but in Spain they are highly prized and can be either basic or luxury goods, some fetching astronomic prices.  Visit any food store, market or supermarket in Spain and you will be spoilt for choice for canned goods - latillas or little cans - at reasonable prices. It's always worth having a supply in the cupboard for those unexpected guests or impulse picnic. A variety of tapas can be produced in an instant - cockles, anchovies, squid, cuttlefish, octopus, mussels, clams, razor clams, scallops as well as a variety of tuna, including the famous Bonito del Norte (Albacore) and many other fish. (I have written a separate blog about the tuna and mackerel families)

Herrings are generally not found in Spanish waters but there is a larger member of the sardine/herring family found in Spain, the shad (Alosa Alosa) called sábalo or saboga in Spanish but also sold by its scientific name, alosa or by its Catalan name, alatja. Although they are marine fish, they often live in estuarial waters and sometimes inland, hence their other name in English, river herring.  They can grow up to 60cms.

All of these fish are members of the wider herring family, but I have not mentioned the herring itself as they are not found in Spanish waters. Canned or pickled herrings, arenque, can be found in Spanish shops. The canned sild, which are popular in Scandinavia and the UK are infant herrings.

Browsing through the cans in Eroski, I spotted one labelled Sardina Aguja and others simply Agujas. Were these also sardines? Apparently not. Aguja is garfish also known in the UK as needlefish.  These make good eating but are often shunned in the UK as the bones have a greenish tinge when cooked. Although this may put off some people it is in no way harmful and doesn't spoil the taste.


Very small sardines are highly regarded in Galicia and Catalonia and many find their way into the canning industry and are sold as sardinillas, little sardines. Sardinillas should not be confused with canned alachas, however, which are often labelled sardinellas, taken from their scientific name.

Sprats are also available in Spain and go under a variety of names, commonly espadín, but also meleta or amploia. In the UK  canned or smoked sprats are labelled brisling or skippers.  And of course in Spain there is a plentiful supply of anchovies - fresh, canned or salted, they are called anchoa or pickled, boquerónes or boquerónes en vinagre - sardines similarly treated are available as sardinas en escabeche.

So, when in Spain, don’t shun the tins as second rate or inferior – try them all and have a feast**.  As for fresh sardines or any of their relatives, simple is best; grilled or a la plancha, outdoors in the sunshine with a chilled bottle of vino blanco or vino roasado!

* Eroski is a Spanish supermarket chain found throughout Spain but originating in the Basque country (Pais Vasco). Its name comes from the Basque erosi, to buy, and toki, place - ie a place to buy. It is run as a worker/consumer co-operative. 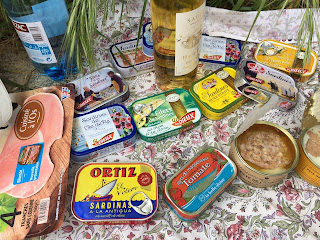 Post script - June 2015 Just returned from Spain where I also saw some canned Chicharillos also labelled as Chinchards - I assume chicharillos to be small chicharros, also called jurel in Spanish and horse mackerel in English. Chinchard is the French name for horse mackerely.  For my blog on jurel see http://www.johnaust.in/2014/05/in-place-of-mackerel-recipe-from-spain.html
Posted by John Austin at 11:46