Cordero al chilindrón is a typical dish from Aragon in north-eastern Spain. Similar dishes can be made with other meat, such as chicken, rabbit, pheasant, venison, wild boar etc in which case cooking times may have to be varied.  There are numerous recipes on line and this is one I adapted and cooked recently in England. As young grandchildren were likely to join us, I omitted the hot paprika and used 1 tablespoon of smoked sweet paprika and one tablespoon of coarsely ground ñoras, ñora picada, instead.

*This is really a matter of taste. You could use sweet, dulce, bittersweet, agridulce, or hot picante in varying proportions. Some recipes use ñoras or ñora paste, others choricero puree.  Ñoras are popular in Murcia and Valencia where they are sun-dried.  In Spain they will find any reason for a festival. We were in Guardamar del Segura one year (the southernmost town where Valenciano is spoken) at the time they were celebrating a week long Ñora Festival! 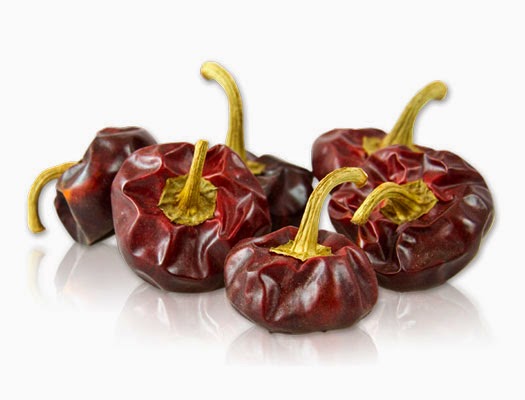 Although sundried paprika is local to the area which I frequent, I usually use Pimentón de la Vera which is smoked,  the characteristic flavour often found in chorizo, and originates from Extramadura in western Spain.
**Any similar ham or pancetta could be used, or lardons of smoked bacon.  Some recipes add chorizo to this dish instead of ham or in addition.
.***Most recipes I have seen suggest white wine, a few use red.  I think red suits the lamb better.  If I was cooking chicken (Pollo al chilindrón) I would probably use white.

METHOD
I use a heavy cast iron casserole dish.
If using fresh peppers, cut into strips and gently fry in olive oil until softened and set aside.

Place the lamb in a polythene bag and shake with flour seasoned with salt and pepper. Shake off excess flour and fry the seasoned lamb gently in batches until lightly browned on all sides and set aside.
Gently fry the onion until softened but not browned, adding the chopped/minced garlic during the cooking. Add the chopped ham and gently fry for a few minutes.  Return the meat to the pan.  Add the pimentón, chopped tomatoes, tomato purée and chopped rosemary. Stir to ensure meat is thoroughly coated. Add the wine and two bay leaves.  Bring gently to the boil and allow to simmer for 5 minutes.  Add the chicken stock, bring to the boil, put on the lid and gently simmer**** for 1 ½ hours.  Remove from heat, stir in prepared peppers and potatoes chopped into bite size pieces and return to heat and simmer**** gently for 1 hour.

**** At this stage, instead of cooking on top of the stove, the casserole dish can be put in a pre-heated oven at 130C.

When ready to serve, sprinkle fresh parsley on top.  Serve with crusty bread and a green side salad. On the day I made this I had just been to the allotment so had a surfeit of fresh vegetables to use up so served it with a mixture of spring cabbage, beans, carrots and chard!