After a night of gale force winds, there was sunshine and clear blue skies so I took a stroll along the promenade to Hove Lagoon to buy some fish.

The winds had deposited part of the beach on the promenade


It's only a 15 minute walk from home to Hove Lagoon and the eastern end of Shoreham harbour.....

.....where the fish is landed and sold to the public at the Brighton and Newhaven Fish shop.
Most of the catch goes to retailers, fish markets and local restaurants - I was told that some is exported to France! 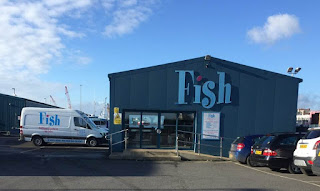 There was a plentiful supply of locally caught fresh fish as well as some farmed. I was spoilt for choice - lots of shellfish, grey mullet, monkfish, sea bream, plaice, lemon sole, brill, sea bass, red mullet and more.....

But finally I settled on the local gurnard - which was also the cheapest! 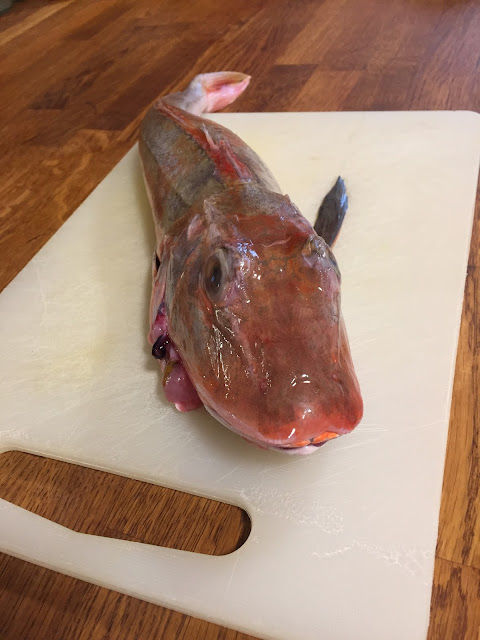 Gurnard is not a pretty creature - unless perhaps to another gurnard - but it is delicious and, as any French chef will tell you, an essential ingredient of bouillabaisse.

Often recipes for gurnard are for fillets. If I were having friends round for dinner, I would probably get the fishmonger to fillet it and I would serve it pan fried, or cook it whole in advance, remove the flesh when cooked, and use in a recipe requiring cooked fish such as Gurnard linguini

It's not usually a dignified or tidy experience eating a whole roasted gurnard - the two top fillets come away quite easily when cooked but to get the rest, especially some of the best bits towards the head, fingers are best!  And when you think it has all been eaten there are always more pickings on the tail and underneath.

Our specimen, at 800g, was more than enough for two, with a little left over for fishcakes the following day.  Don't throw away the head and the bones.  I boiled these up with the remaining juices from the pan and some added water, a chopped stick of celery and a chopped carrot, to produce a great gelatinous fish stock which when sieved and left to cool can be kept in the fridge for a couple of days or frozen for future use for poaching or as the base for a fish stew. (As many people ask their fishmonger to fillet gurnard, they may have several heads to spare - they are excellent for making stock - so it might be worth asking if they have any.)

In America, the red gurnard is known as sea robin probably because of its colour and its large pectoral fins which fan out like wings when it is swimming, giving an appearance of flying in the water

The fish also has 6 "legs" - actually modified fins - with which it walks on the sea bed and very sharp dorsal spines - beware!  These spines are mildly poisonous before cooking but are not usually dangerous, although some people may have an allergic reaction if pricked by them - and they can be sharp.  Any poison or allergen in the spines is completely destroyed by cooking.

Season the inside of the body cavity with freshly ground pepper and salt (do not use salt in the body cavity if using preserved lemons as they will be salty enough). Stuff the cavity with the fresh herbs (I used thyme but you could substitute rosemary, oregano, marjoram or tarragon), chopped lemons, garlic and ginger. 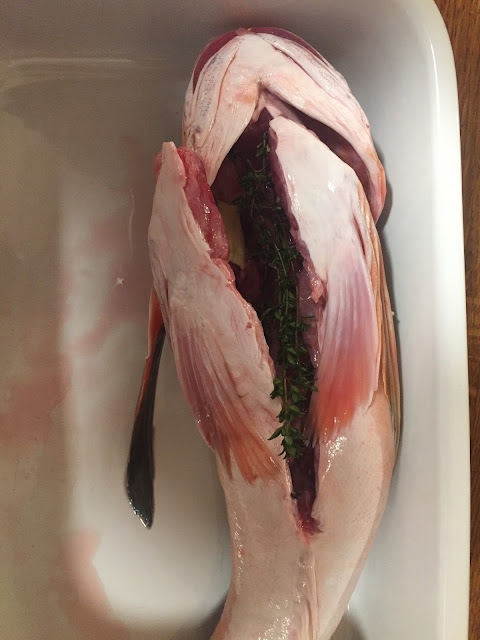 When you have stuffed the body cavity, place the fish in an oven proof dish 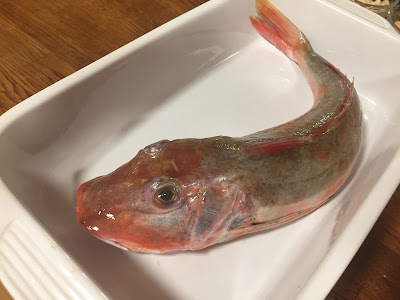 Drizzle olive oil over the fish, pour over a glass or two of dry white wine - I used dry vermouth. Season with salt and pepper and tightly cover the dish with foil (or you can put the fish in a loose parcel of foil) so that the fish steams as it cooks.  Leave to cook for 15 minutes then remove the foil  (or open the parcel), baste the fish with the pan juices (if the juices have dried up, pour over a glass of wine or water, drizzle with a little oil and the juice of a squeezed lemon) and continue cooking for a further 5 minutes.

Check that the fish is cooked (if the flesh is still translucent cook for a further few minutes).

Cut down each side of the dorsal spines to remove the fillets. Any juices in the pan can be poured over the fish. Serve with mashed potato and spinach or a green salad.

It was delicious - and tomorrow we have fishcakes!