OUR ALLOTMENT - Life on The Weald September 2016

After only a couple of years on the waiting list, Sylvi's name came up and we were offered and accepted a half plot (125sq m) on The Weald, which is the one we wanted, and we have friends who have plots there too. Hopefully, we can come to a mutual arrangement over watering when we are away.

It looked a daunting task as it was quite overgrown and had been abandoned for more than a year and there was an accumulation of rubbish - metal, plastic, fencing, the remains of an old shed, roofing felt and old carpets, chicken wire and more. Sadly the adjacent half-plot is still in a derelict state. 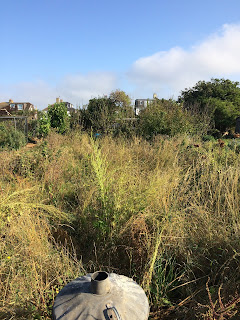 The Council agreed to remove the metal and plastic but not the roofing felt, carpets or timber so we had several trips to the dump and burned some of the untreated wood.  Once most of the rubbish had gone and the council has strimmed the plot, it looked a little less daunting. 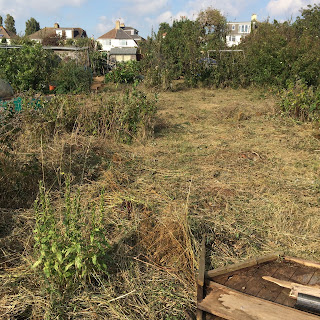 We've enlisted the help of Luke and Charlie and will have a concerted effort at the weekend.  There is still a lot of rubbish including the remains of a wire fence all tangled up with brambles and loads of paving stones which hopefully we can use for the base of a new shed.

I hope to bring one of the raised beds from Luke's allotment at Mile Oak where I am co-worker so that I can sow some broad beans in November.