Will the real artichoke stand up please?  Thistle or sunflower?

There are two completely different, and only very distantly related, plants which are called artichoke but both are delicious and both grow on my allotment.

The true artichoke, often referred to as globe artichoke (Cynara scolymus or cardunculus) is a kind of thistle and the head or flower is the edible part, eaten before the flower has matured or opened.

Here are pictures of some grown on my allotment in Sussex. 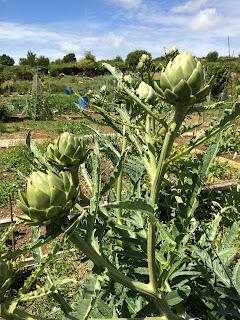 We usually boil the unopened flower bud (seen above) and then pull off the leaves (or bracts) and suck the juicy, fleshy base dipped in butter or olive oil and balsamic vinegar or they can be served with a Hollandaise sauce.  When all the bracts have been removed you come to an inedible, hairy choke.  If this is cut off carefully with a very sharp knife at the base of the hairy bit, the edible fond is revealed and this is the most delicious part, which I prefer served with butter and black pepper or a vinaigrette dressing.

These are neither artichokes nor from Jerusalem.  They are a variety of sunflower (Helianthus tuberosus)

The edible part is the underground tuber, which is hard and knobbly, rather similar in appearance to ginger root. 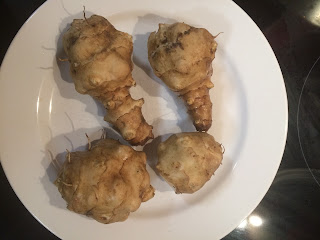 The tubers can be sandy, brown or purplish in colour and some varieties are more knobbly than others - and a pain to peel.  To cook, they can be treated like potatoes.  Roasted in their skins they are an excellent accompaniment to lamb. They make an great starter, peeled, steamed and served with lemon juice, butter and black pepper and are superb in soups.  Unlike potatoes they can be eaten raw. They have a crisp texture, rather like water chestnuts and can be added to salads, sliced or in julienne strips.  If being served raw, or peeled to be boiled/steamed, it is wise to put them in water with a little lemon juice or cider vinegar before cooking to prevent them discolouring.

Do they have any drawbacks?  Yes they do! Firstly, they are a pain to peel and, secondly, they have an unfortunate property which has led to their nick-name, fartichokes.

The peeling problem can be overcome - don't peel them. If they are well washed, the skins are edible and if you are roasting them or making soup and puréeing/liquidising them you might just as well leave skins on.  If you are just boiling or steaming them you can cook them in their skins and either eat them with the skins on or eat the creamy inside and leave the skin.  Some would suggest parboiling then peeling but I think that is more trouble than it's worth.  If you peel them raw you might waste quite a bit, but they are so prolific on my allotment this doesn't bother me and the peelings just go back into the compost.

The second problem is not so easy. Jerusalem artichokes are very nutritious, 10% protein, no fat, rich in fibre, iron and potassium and low in starch.  They do contain a great deal of carbohydrate though (75%), in the form of inulin (not to be confused with insulin)  Tubers stored for a long time will convert the inulin to fructose (which gives the vegetable its sweet taste). The problem is that the human metabolic system doesn't naturally digest the inulin as it does with starch and relies on the bacteria in the gut to do this. Although this is a perfectly natural and healthy process it does lead to flatulence - which is more marked in some people than others - and can cause tummy-rumbling and for some abdominal discomfort. And the gas has to come out in the end!  But they are too good to be missed for this reason, although I wouldn't recommend eating them too often, and you might like to consider the company you are dining with, or meeting later, before putting them on the menu. 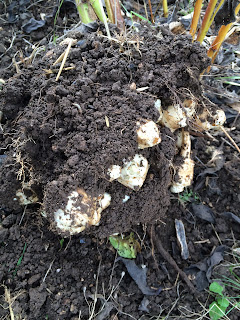 Once you have them in your garden or vegetable patch you will always have them!

I will get round to some gardening tips and recipes for both globe artichokes and Jerusalem artichokes when I find the time but I must get back to my leek and (Jerusalem) artichoke soup, so in the meantime there are many great ideas for recipes you can look up on the internet.