It's been a long time since 27th August, when I promised to share my recipe if the dinner party was a success.  It was, so better late than never, here it is.

My first fish tagine, made some years ago in England, was derived from an Egyptian recipe in one of Keith Floyd's books from his TV series Floyd Around the Med. I have misplaced, lent or lost the book but the TV series is being repeated and the Egypt episode is on 22 January  Floyd around the Med so I must remember to record it.

In the meantime, here is my version 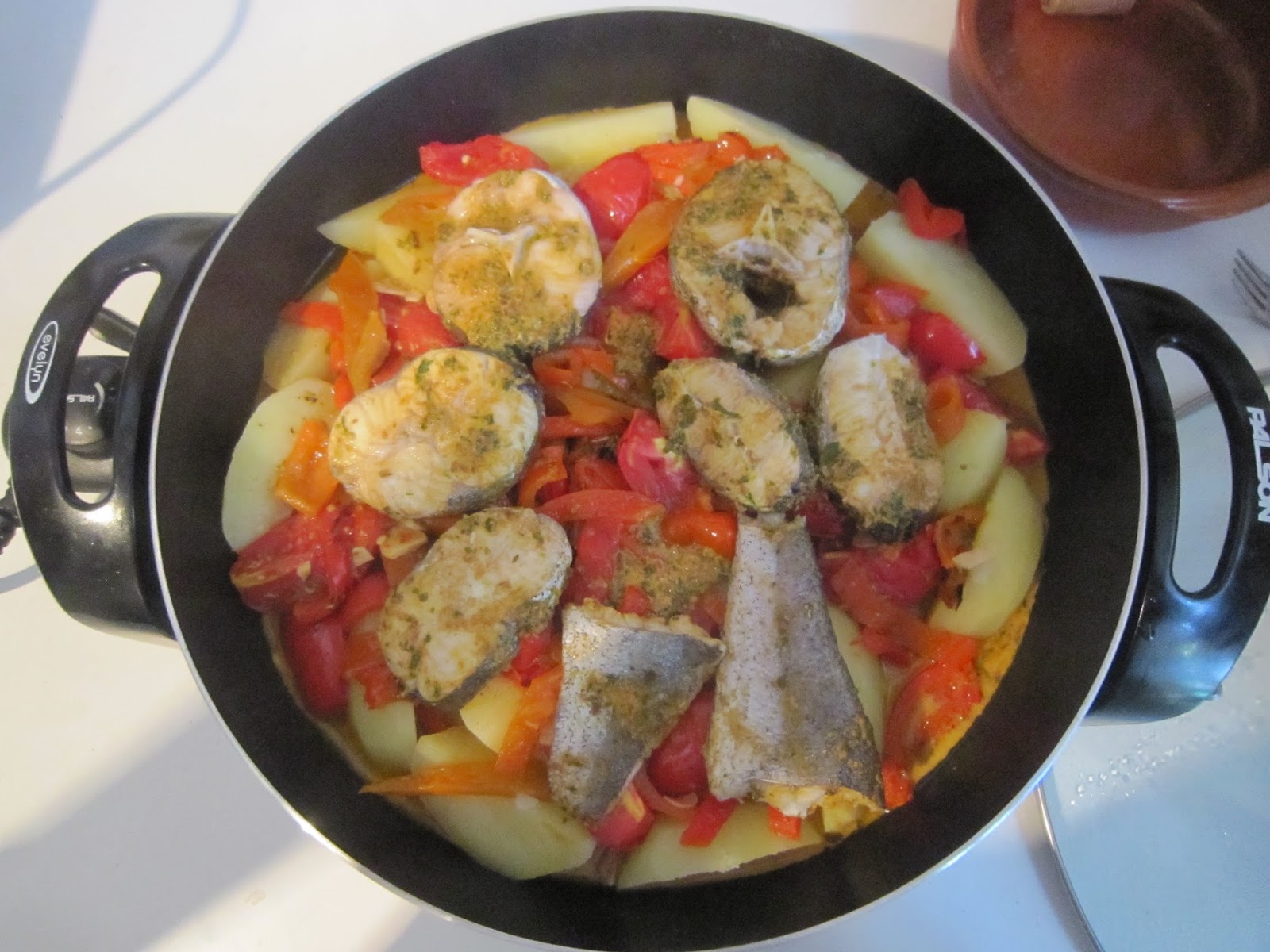 Hake (Merluza) seems to be the most popular fish in south eastern Spain but I could not find fresh fillets (filetes de merluza) or steaks (merluza en rodajas) anywhere in Santa Pola - one of the most important fishing towns on the Spanish Med - only frozen ones (from Namibia!!)....

...but every fish stall, market and supermarket, had whole fish and they will sell a whole one or half and clean it and do whatever you want with it.  I bought the tail end half and asked for it “cortado”.  They will ask how many or how thick you want the slices.  If you buy half a fish,  whichever end of the fish you choose, they will always give you half the head. (The cheeks are a delicacy served in the Basque country –Kokotxas – but you need a lot of heads to get enough for a dish). The head skin and bones of Merluza, however, are excellent  for fish stock.

Make Charmoula with  mortar & pestle or blender. Rub 2/3 of charmoula on fish steaks, cover and leave in fridge for  1 – 2 hours.

Parboil potatoes for 10-15 minutes – quarter or halve lengthways according to size.  Heat 2 tbsp olive oil and fry garlic until softened. Quarter tomatoes lengthways and add until they begin to soften.  Stir in green peppers, chopped or sliced and remaining charmoula. Season with salt & pepper.

Place potatoes on base of tagine/saucepan/frying pan with lid.  Scatter ¾ of tomato/pepper mixture over potatoes; place marinated fish steak on top; dab remaining tomato/pepper mixture on each steak; scatter olives on top, drizzle with 1 tbsp olive oil; put on lid and gently cook for 10-15 minutes. Serve with crusty bread and green salad.

*Charmoula is a blend of spices, made into a paste and used as a marinade in north African cookery mostly for fish but also for chicken.  I can’t recall where I derived my mixture from but you can make your own with whatever blend of spices you prefer.
In Moro East  ISBN 978 0 09191 777 7 Sam & Sam Clark have a charmoula recipe: 1 medium bunch coriander (40g); 2 large garlic cloves, grated; 2 tsp ground cumin; 2tsps Moroccan (unsmoked) paprika; 1½  tsps red wine vinegar; 4 tbsp olive oil. (They also have a recipe in Moro The Cookbook  ISBN 9780091880842)
In Rick Stein’s Mediterranean Escapes ISBN 978 1 84607 867 5 he has a recipe for Charmoula; 3 garlic cloves; 1½ tsps ground cumin; 1½ tsps paprika; ½ medium hot red chilli, seeded and chopped; ½ tsp saffron strands; juice of 1 small lemon; small handful of coriander leaves; small handful of mint leaves; 4 tbsps extra virgin olive oil.
In England I have made this tagine with haddock and added 2 tsp of Ras el Hanout and a tsp of Sumach which are available in most Turkish or Middle Eastern delis.

** you can use sweet or hot according to your preference.  In their recipe, Moro specify unsmoked but I usually use Spanish smoked hot paprika which I have acquired a taste for. (Pimentón de la Vera comes from Extremadura, where they smoke the peppers to dry them whereas in the south they are dried in the sun) Paprika or Pimentón comes in three varieties – hot (picante), mild or sweet (suave or dulce) and medium (agridulce which translates as bittersweet or sweet and sour)
John Austin
Santa Pola
27 August 2013