Something new to meddle with -

"A fruit, vulgarly called an open arse; of which it is more truly than delicately said, that it is never ripe till it is as rotten as a turd, and then it is not worth a fart." 18Century Anon


Welcome to the world of Medlars!


The Common or European Medlar has been around for centuries and appears to have been popular in England before sugar was available.  The fruits are hard and sour and do not ripen on the tree and cannot be eaten straight from picking.


They need to be “bletted” i.e. stored in a cool dark place until they begin to go soft and brown or just beginning to decay when the flesh becomes sweet and can be spooned out.  They are suitable for making making jam or jelly – but still require bletting first.

Although called the European Medlar (its botanical name being Mespilus germanica i.e. German Medlar), it appears to have come originally from Persia and according to the Royal Horticultural Society there are several varieties available in the UK. 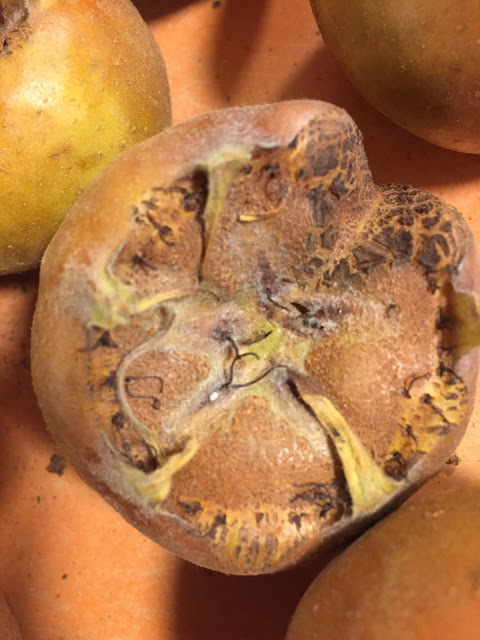 .
Shakespeare called the fruits “open-arse”  which, I am informed*, could have referred not to an arse but rather female genitalia - which makes more sense when reading Mercutio's misogynistic remarks in Romeo and Juliet regarding Rosaline's "quivering thigh
And the demesnes that there adjacent lie"

Mercutio goes on to say:
If love be blind, love cannot hit the mark.Now will he sit under a medlar treeAnd wish his mistress were that kind of fruitAs maids call medlars, when they laugh alone.— O Romeo, that she were, O, that she wereAn open-arse, thou a pop'rin pear.

I don't recall any of that from my English Literature O Level notes! (for younger readers O Levels were what is now known as GCSE - but harder!!!!).

I posted the D H Lawrence poem ("Medlars and Sorb-Apples”) on Facebook – it goes on for several stanzas - and it drew this response from my daughter, Zoë,

"Delicious rottenness.
I love to suck you out from your skins So brown and soft and coming suave....."

- So here’s this fruit which the French thinks looks like a dog’s arse, Shakespeare likens to  a vagina, Lawrence calls excrement and which can’t be eaten until it’s rotting – little wonder that it has fallen out of fashion!

But, nevertheless, D H Lawrence loved them and others say they’re delicious, so as mine were bletting nicely.... 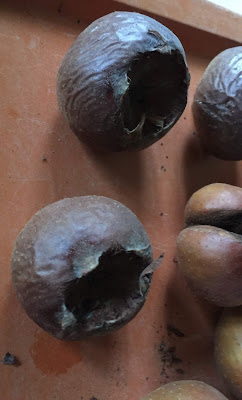 It didn't look too appetising - 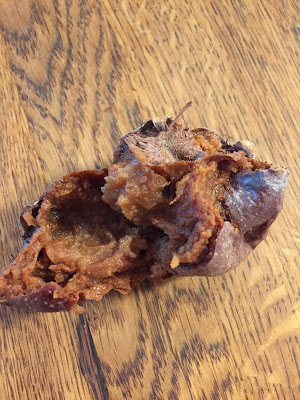 It was soft and squishy and could be spooned out.  It was quite good, however, with a taste of apple and date, sweetish but also with a tart aftertaste. I had some spread on toast - quite nice actually.

I have decided to try making medlar jelly which is particularly recommended by Nigel Slater to have with your roast pheasant or other meat. You will have to look out for a subsequent recipe blog!


In Spain we have discovered a different sort of medlar......


In May 2012, whilst driving to visit the waterfalls north of Alicante at Las Fuentes de l'Algar   (Les Fonts de l'Algar in the local Valencian language), we drove past fields of cultivated fruit trees laden with yellowish orange coloured fruits which from a distance looked like apricots but it was rather early for apricots and the leaves on the trees didn't look quite right for apricots, as this library picture shows.


On arrival at the waterfall we soon learned what they were called because they were present in large numbers in every food shop. They were on sale fresh as well as in cans and bottles and on the menu in every restaurant - they were Nisperos!


Although we now knew the Spanish name we were none the wiser until we were served them for dessert and tasted them.  They had a curious sweet and sour taste, a mixture of apple, citrus and peach, someone thought mango.

We bought some to take home 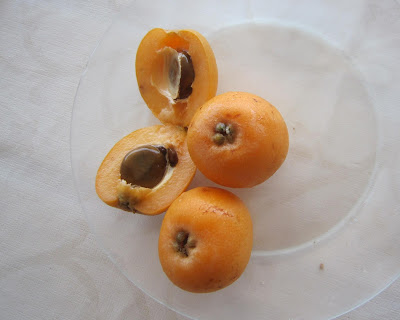 Subsequent Googling revealed that the Nispero is known in English as the Asian or Japanese Medlar (although it probably originates from eastern China from where it spread to Japan).


Apparently it was introduced to Spain by sailors arriving in Valencia around two thousand years ago but was not much cultivated until the 19th century when it became popular around the Mediterranean. It is known in some countries as the loquat . It is suited to the same climate as orange and other citrus trees, so Spain seems an obvious place for it to grow and Spain is now the main producer of nisperos in Europe. The nispero is in the same family as the common European medlar, but a distant relative.


It is yellow or apricot coloured on the outside with soft, creamy yellow flesh with two to four large seeds in the centre. The skin is edible, although in Spain many people peel off the skin; but the seeds, like the apricot kernel, are poisonous as they contain quantities of cyanide compounds. 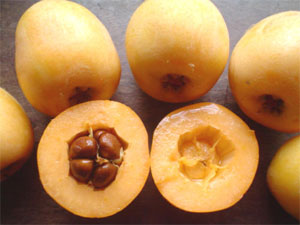 Unlike the European common medlar, it ripens on the tree and does not keep well so needs to be eaten soon after picking.  It is at its sweetest when fully ripe.


Because the seeds have cyanide compounds they cannot be eaten and most recipes that I have seen say they should be removed before using the fruits in cooking, although I have seen a few recipes which say the seeds can be tied in muslin and boiled with the flesh for jam and jelly making.  In Italy the seeds are used for making nespolino liqueur . There appear to be many varieties, with some containing less cyanide compounds than others. The fruit itself has a high pectin content which makes it suitable for jam or jelly making without using the seeds.  If I do get round to any jam making in Spain, I think I will err on the side of caution and remove the seeds!

Apart from helping jam to set, the pectin in medlars is also a rich source of dietary fibre, and very good for gut health.

The Basque co-operative supermarket, Eroski, has a food website which says the Nispero fruit is very beneficial for health because of its high pectin content as the fibre retains water and
“swells in the stomach forming a gel, which reduces the speed of gastric emptying and produces a satiety sensation, very useful for people who follow slimming diets. A pectin is attributed beneficial effects in case of diarrhoea because it slows down the intestinal transit, by retaining water. To this is added the richness in medlar tannins (more abundant in its juice), substances with astringent and anti-inflammatory properties. Tannins dry and deflate the intestinal mucosa (layer that lines the inside of the digestive tract)
“On the other hand, the pectin increases the pH (decreases the acidity) when the acid is well mixed and neutralized with food and the fibre itself, so the consumption of ripe medlars is indicated in case of gastrointestinal disorders (delicate stomach, gastritis , gastroduodenal ulcer, etc.) To the richness in pectin, citric, tartaric and malic acids are abundant in their pulp, which exert regulating and toning actions on the mucous membranes. Also, fibre helps reduce blood cholesterol levels and good control of blood glucose (blood sugar levels), so the consumption of medlars is beneficial in case of hypercholesterolemia and diabetes.”
According to Eroski, the Nispero is also a source of beta-carotene, an antioxidant which may help reduce the risk of degenerative diseases, such as cardiovascular diseases and, given its high content of potassium and organic acids, is a good diuretic, increasing the production of urine facilitating the removal of grit and uric acid from the kidneys. It is recommended in case of gout, excess of uric acid, uric acid stones, and hypertension.
So apart from the cyanide, it seems a good fruit to eat!
Despite Fonts de l’Algar being a major tourist attraction, and only 15km inland from Benidorm (that most British of Spanish seaside resorts), we heard very few English voices, most of the visitors being Spanish.  The nearest town is Callosa d'en Sarrià, which gives its name to the surrounding area renowned for the quality of its Nisperos, such that, like wines, they have their own protected DO (Denominacion de Origine)  “Nisperos Callosa d’En Sarrià’’ and regulatory body http://nispero.com/
But you don't have to go to Spain to taste them as Nisperos are now available in England for a short period in the season.  Waitrose sell them. In Spain they are sold by the kilo; Waitrose sell nisperos in packs of 6, describing them as having a “sweet flavour which is like a mixture of apricots, apples and plums”. Waitrose advise that they can be eaten raw but warns that the hard brown seeds and the membrane surrounding them should be discarded. They add that “They are particularly good for making into jams, jellies and relishes; if the seeds are included during cooking they will impart an almond-like flavour”. Well that will be the cyanide!  I think I can do without the almond flavour.  Watch this space for a future recipe!