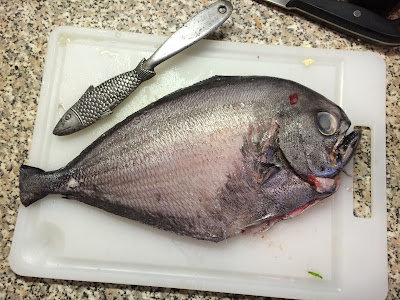 The fishmonger and I tried to scale it as best we could but if roasting the skin forms its own "tin foil" covering.

Make deep diagonal slashes on either side of the fish.  Season the fish inside and out with salt and pepper and rub skin with tarragon forcing some into each slit.  Put the remaining tarragon in the belly of the fish and insert a thin sliver of lemon peel into each slit (if you have preserved lemons, use the peel of these but reduce the amount of salt seasoning).  Put the remaining lemon peel in the belly of the fish with a clove of garlic 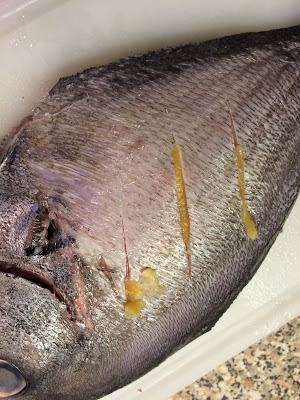 Remove the foil (add a little more oil and/or lemon juice if the fish is drying out) and baste with the juices in the dish.  Return to oven and continue cooking uncovered for 10-15 minutes until the skin is crispy and the flesh firm and white.

JAPUTA - Poached whole on the bone

After a determined effort to descale this fish, weighing just over 1kg, I seasoned the fish, inside and out with salt and freshly ground pepper and stuffed the belly with .
a sprig of fresh thyme and garlic and put to one side.

Make deep slashes on either side of the fish and insert slivers of lemon peel into the slashes. I used preserved lemons . : Place the whole fish in the poaching liquid, add a splash of Anis if you like the flavour, put on the lid and poach gently for 30 minutes. 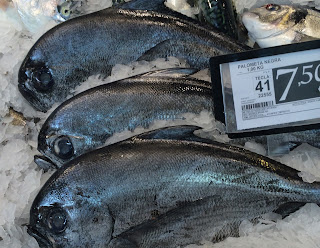