Time to harvest and savour the fruits of our labour!

we have now lifted most of the early potatoes - Nicola and Charlotte - wonderful waxy, new potatoes, tasting just like I remember new poatoes from my childhood.  If you want to grow something that tastes really different from anything you buy in the shops, grow potatoes. 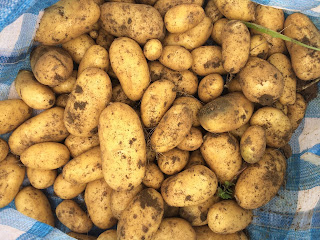 The ground we cleared by lifting potatoes is home for my autumn leeks which I have now transplanted.  Using a dibber to make holes about 8 inches deep, I just dropped in the young leeks and then watered, leaving room for the leeks to expand and for the holoes to fill naturally.  They look good now but they will need regular hoeing and hand weeding if the summer weeds are not to take over. 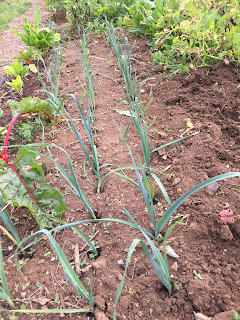 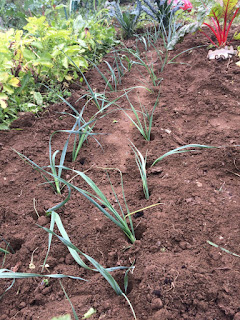 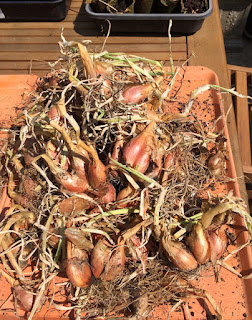 And the cucumbers are just getting the hang of climbing up the netting!  They are slow learners and seem to prefer to trail on the ground! 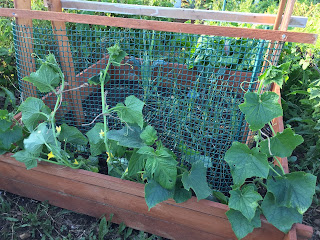 On the squash front, the tromboncinos are coming along nicely 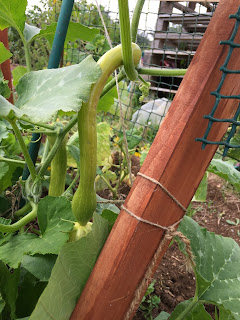 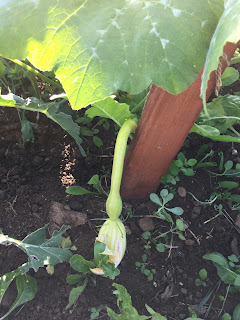 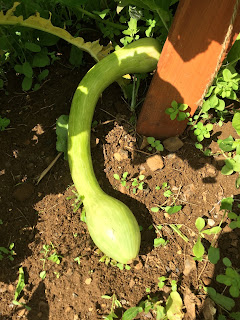 ....and the competition with Maurice is on! 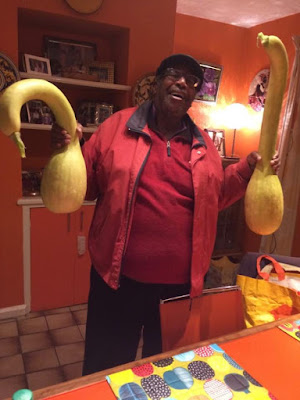 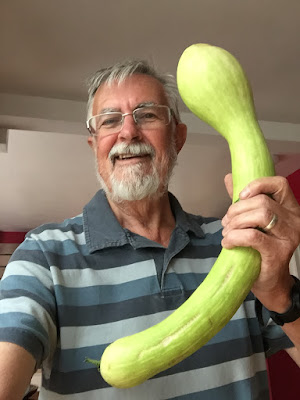 But forgetting the competition, the best thing is to pick them young and treat them like a courgettte 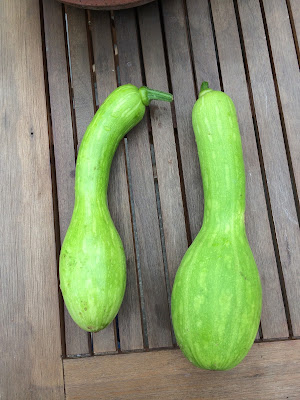 Meanwhile, across the road at Neville, Luke's Patty Pan are doing well 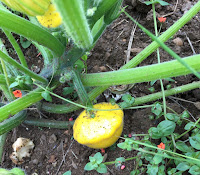 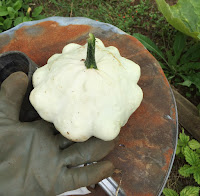 Another great success on the Weald has been the chard.  I had sown some rainbow chard from seed and also some Spanish Swiss chard (or silver chard) from a pack of seeds I had brought back from Spain, but there also seems to be a lot of self-seeded red chard on the plot which is quite prolific. 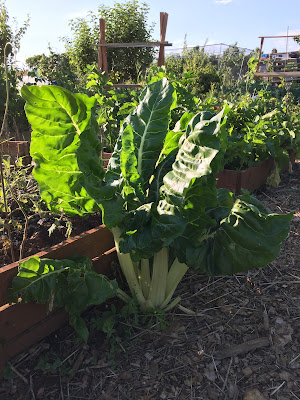 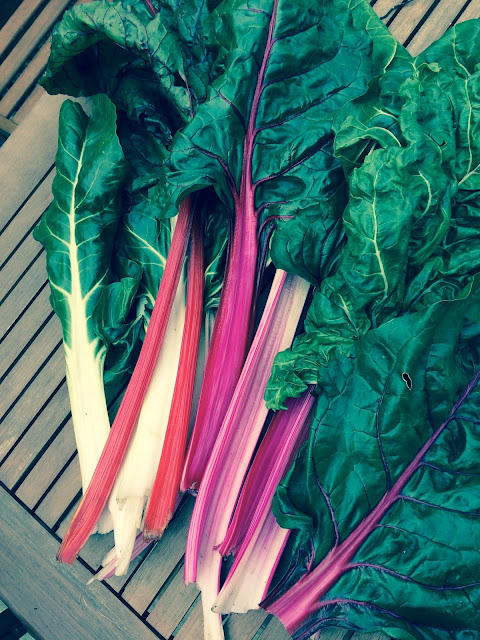 There is so much that we have given loads away, frozen some, eaten it daily, put it in soups and curries and are busy exploring recipes for different things to do with it.

The plum tree which we inherited looks as though it will give us an abundant crop this year but is showing some signs of leaf disease so we must think about spraying it this autumn. 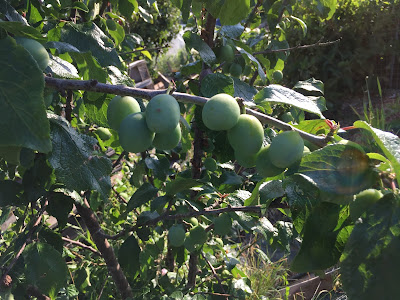 But whilst we are gloating about the success of our crops and relaxing in the sunshine, there is some hard work to be done if we are to get the shed up before winter! 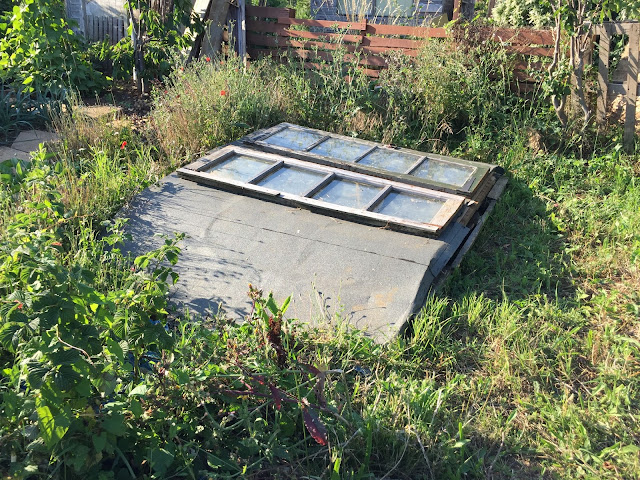 The gilt head sea bream gets its name from, and is easily identified by, the gold colouring on the side of the head and the distinctive gold band between the eyes. 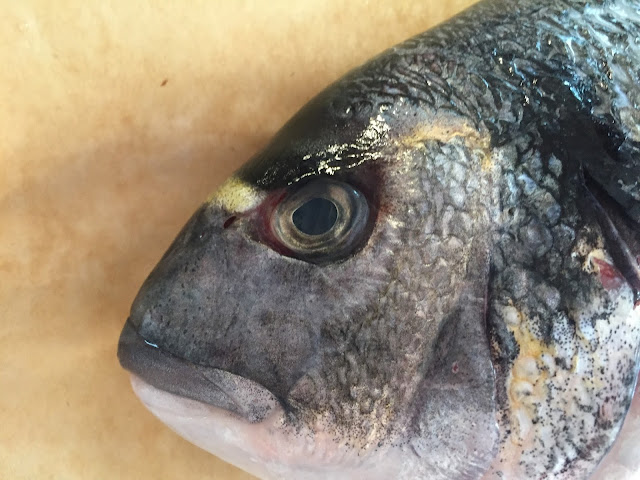 It is generally regarded as the best of the breams for eating, although I recall Rick Stein waxing lyrical about the dentex on one of his Mediterranean adventures, describing it as better than sea bass and saying that gilt head sea bream came close in flavour.  We have eaten dentex in Spain (dentón) and I don't wish to enter into the dentón versus dorada debate except to say they are both excellent!

Gilt head sea bream is found in British waters and is readily available in the UK.  It is common throughout the Mediterranean - (dorada in Spanish, daurade in French and orata in Italian) and is farmed extensively in Greece.

All the breams can be successfully roasted, baked, grilled, poached whole or pan-fried when filleted.


On this occasion, I chose to roast in a parcel - you may see such recipes described as en papillote in French restaurants, al cartoccio in Italian.


I had some fresh tarragon in the garden, some recently harvested garlic from the allotment and a jar of home preserved lemons in salt. A perfect combination.

Gut, scale, trim the fish and remove gills - or ask the fishmonger to do this for you.

Cut a rectangle of grease-proof/baking paper slightly larger than the fish and place on a sheet of foil large enough to wrap round the fish. 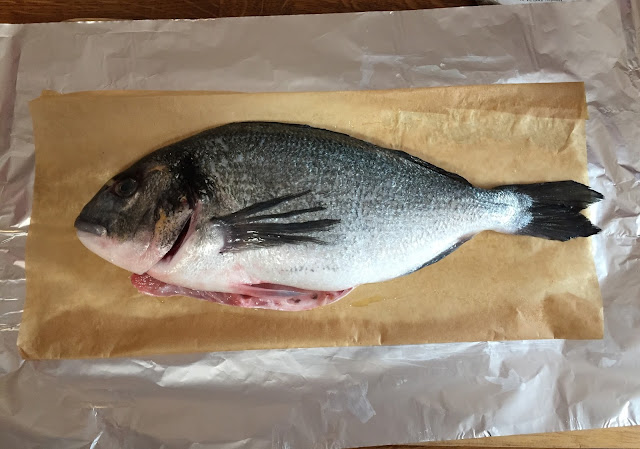 Brush the baking paper lightly with olive oil, and place the fish on top 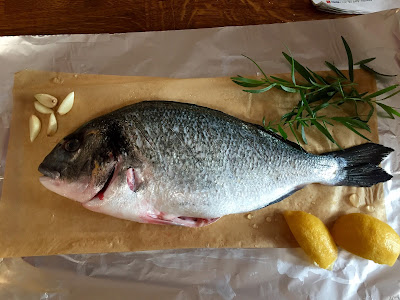 Make deep diagonal slashes on either side of the fish, down to the bone. 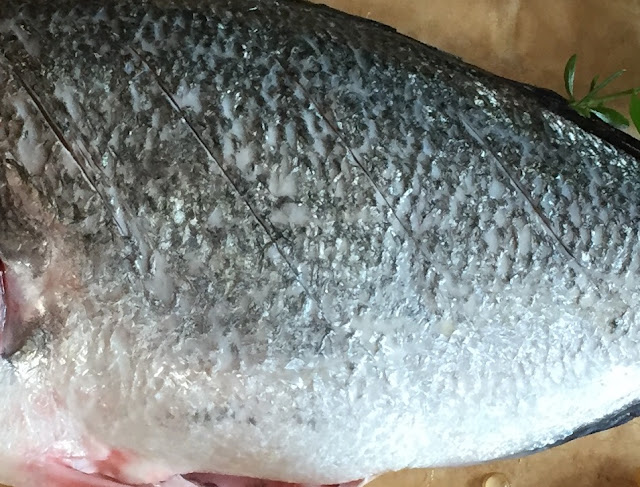 Peel and cut the garlic into thin slivers.  Remove flesh from the preserved lemons and discard. Rinse the peel well in running water and cut into thin slivers.  Stuff the slivers of garlic and lemon and tarragon leaves in the slits on both sides of the fish. 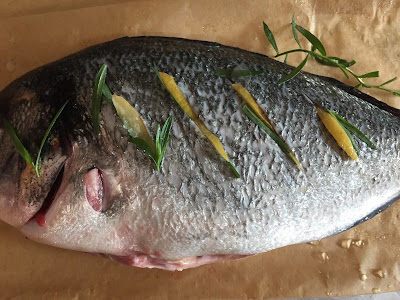 Place any remaining tarragon, garlic and lemon peel inside the body cavity and on top of the fish. 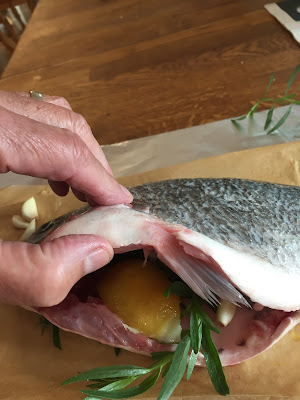 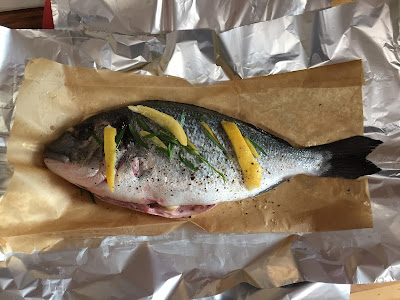 Fold the foil over the fish to make a neat sealed parcel, but do this loosely so the fish can steam as it is cooking and will remain moist.

Heat the oven to 180C. Place fish on a baking tray and cook for 15 minutes. You may wish to open the parcel for a few minutes towards the end of cooking - a) to check that the fish is cooked and b) to crisp up the skin.

The top fillets can easily be removed and placed on a serving dish, then the central bone can be easily removed to access the two remaining fillets. 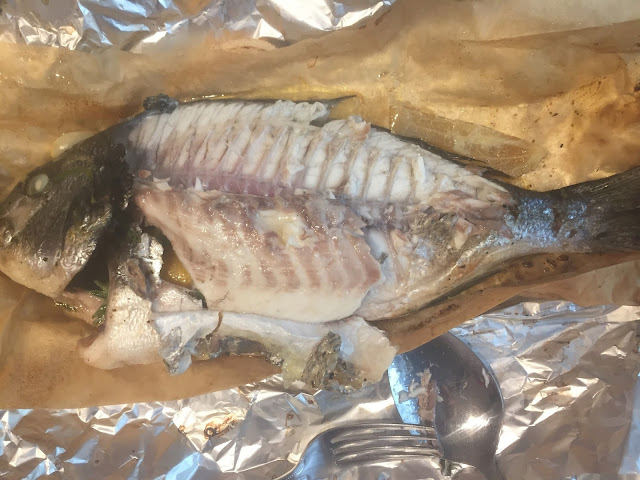 Pour over any juices from the parcel and serve.