1st June We were still harvesting the last of the Silver beet chard from last year.
It was time to conduct some repairs and erect a climbing frame for the cucumbers.
It was also time to add some poles to the rather rudimentary bean frame
6 June   As my home sown purple sproutingt broccoli had failed to thrive, I ordered some plugs from a garden centre.  I also sowed some more cucumber seeds (Akito) at home.
7 June Both the front and back gardens at home were looking colourful.
On the plot the nigella (Love-in-a-mist) was in full flower.

But it was not only the flowers that were thriving - so too were the weeds, especially plantain, ragwort and blistery ox-tongue.  I say "weeds" but basically a weed is a wild plant growing where you don't want it to grow.

Many gardeners will get rid of ragwort, thinking it is poisonous to animals - it is if eaten in great quantities by horses and cattle, but we don't have either of those. It has the unfortunate common name of "stinking willie" but is is of significant value for its nectar which feeds insect pollinators, especially bees and butterflies, so I leave it growing in waste areas. (I am told it is in the top ten for nectar production!). It is also a major food source for many beneficial invertebrates, including some threatened species such as the beautiful cinnabar moth as well as the threatened Sussex emerald moth (which hasn't been seen in Sussex since the 1950s and is now found only around the Dungeness area in Kent). A recent conservation project at Rye appears to have been partially successful in re-introducing the species to the county.
I removed the cloches (made from plastic bottles) from the courgettes that I had planted out earlier, hoping that they were now sufficiently far advanced to avoid being destroyed by slugs/snails.
The black currants have some way to go before they are ripe, but the red currants are almost ready to pick.
8 June   Several plot holders have commented on the absence of bees and butterflies this year.  I wonder if they have all migrated to my plot as the bees seem to love the nigella (and the ragwort and dandelions!)

Apart from the indigenous self-seeded "Flanders" poppies, a number of garden poppies have found their way to the allotment.  If they're not doing any harm to vegetable crops, most people leave them as they are very attractive, but it is best to remove them before they scatter their seeds! When dried they make an attractive addition to a flower vase at home, as do the Nigella seed pods.
9 June I picked the first mangetout peas.
Earlier, I had mixed up the seedlings of Hurst Green Shaft and Kelvedon Wonder peas, but now was the time to harvest them, while young and sweet, without worrying which variety they were.
In the pond, the water lily was just coming into flower
Above ground, the foliage on the parsnips looked very green and healthy. I just hope there is as much activity below the surface!

It was time to harvest our first red gem lettuce

I don't pull them up, I cut them just above ground level with a knife in the hope that the stump will grow some more salad leaves.
The patty pan squashes were putting on growth....

Despite the unreliable weather - we had rain when we should have had dry sunny spells and we had dry windy weather when we needed rain - the garlic had done reasonably well.  I raised some up gently with a fork to help them dry off before lifting.
We were also able to start lifting the first early new potatoes - red Duke of York

11 June What a difference a couple of days of sunshine make! The patty pan squashes are now flowering - but only male flowers so far.
Sylvi managed to pick more than 1.5kg of redcurrants.... 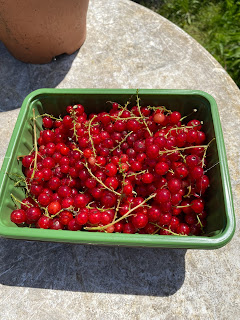 ...which we transformed into redcurrant jelly.  The raspberries were a lot smaller than last year and many should have been picked earlier when we were away.  We did manage to harvest the remains of the chard and spinach though. 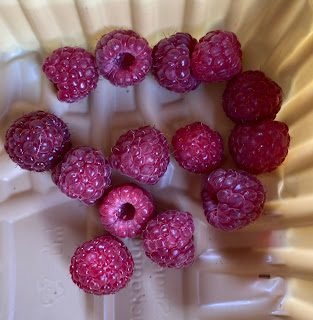 12 June saw the flowering of the first corn cockle
13 June At home, the broccoli plugs had arrived but they were rather "leggy".  I potted them up and put them outside to harden off.  I also sowed some more Kelvedon Wonder peas in trays at home.
16 June  Back at the allotment, one week after the arrival of male flowers, the first female flowers were appearing on the Patty pan squashes.
18 June We were about to go away again, so it was time to check on the various plants and give them a good watering (hopefully, if there is a dry spell while we are away, Luke will be able to water them).

30 June Back from a few days away with granddaughters celebrating the end of GCSEs, we returned home to find that the Marmande tomatoes at home had put on quite a bit of growth. We had given them a feed, before we left, with a liquid fertiliser/feed for tomatoes (which we had also given to the courgettes, squashes and peppers on the allotment)
On the plot, the courgettes, squashes and  cucumbers had also put on some growth

The patty pan squashes in particular are showing good potential.

We seem to have a productive July to look forward to.