Covid restrictions eased this month and advice on shielding ended, but we are continuing the same pattern until we have the second vaccination which is due this month but it will take 2 - 3 weeks to be fully effective.  We can have visitors in the garden again, but the weather is not yet very suitable for picnics or al fresco dining!
March had been a very mixed month with gales and storms, alternating with bright sunny days and temperatures ranging from zero to 20C.  April began well with clear skies and bright sunshine for the first few days, but with temperatures nearer seasonal normal, rarely rising above 11C. But by 6 April a new cold spell arrived with a night time low of -2C, cold winds and daytime temperature not rising above 7C.  So not a good time for barbecues in the garden or for putting seedlings out to harden off!
There was some good news on the plot - on 4 April I saw the first sign of the first early potatoes showing above the surface.

The potatoes had been planted shallowly so now was a good time to start earthing up by raking the soil on either side of each row to just cover the growing tips.

The water supply had been turned on at the beginning of the month so I took the opportunity to give the rows a good watering.  Although we have had some rain, we have had a lot of wind and the ground was very dry.

In March, I had erected the frame for the climbing beans and had dug a trench on one side, and then filled with semi-rotted compost.  I now dug a similar trench on the other side and filled it with the remainder of the contents of the compost bin together with some shredded newspaper which will aid water retention and eventually rot down.
I will leave the trench and compost uncovered until nearer the time for sowing/planting the beans.
I had saved a few seeds from last year's climbing beans which had been a mixture of runner beans and a runner/French bean cross.
A few days later, on 10 April some of the runner beans sown at home had germinated and were beginning to break the surface.
The table in the conservatory was beginning to get very crowded with a variety of seedlings and young plants but it was still too cold to consider putting them outside. There were some sunny days but temperatures rarely above 10-11C and down to near freezing at night.
We had a number of seedlings and young plants in need of hardening off - tomatoes, peppers, collard greens, cavolo nero, purple kale, kalettes, Brussels sprouts as well as sunflowers, nigella and geraniums (pelargoniums). I tried putting some young plants outside during the day, when the sun was shining, but they clearly didn't like the cold wind - so I decided that hardening off will have to wait a while.
I had sown some of the geranium seeds in used tea bags, which seems to have worked well,  so I have now tried that with some Tomato Super Mama seeds. The seed catalogue says that this variety produces oval fruits weighing 150-170 grams each! We shall see. 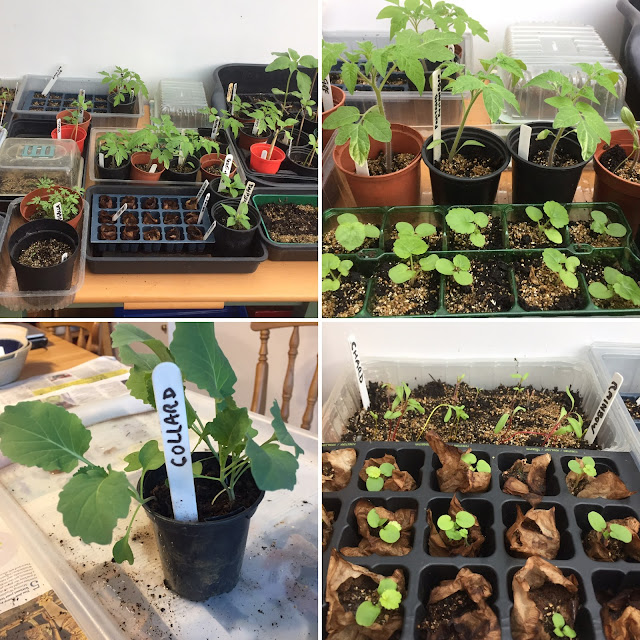 Out in the garden, on 13 April, some of the early tulips were now in flower
Our children discovered a cheap min-greenhouse in the newly opened Lidl store in Hove and we agreed over the phone, that they should buy one, thinking it would be suitable up against the fence in our garden for hardening off our young plants. Unfortunately it proved too large and intrusive so we decided to give it a try on the allotment where our polytunnel had failed!
15 April was a bright clear day
With only a gentle breeze, it seemed a good opportunity to complete the min-greenhouse and put the cover on.

As the weather was improving, I decided to remove the fleece tunnel from the mustard greens that had been sown in the winter.  They seem to have survived.
I have not grown mustard greens before. We had green and purple varieties and both are very "mustardy". The seed packets suggest that the purple ones (organic Osaka purple) should be eaten cooked but the green ones (organic green wave) can be eaten raw or cooked. We find them both good in salads.
The weather continued to improve with bright clear days - we had not seen any of the snow that had been experienced elsewhere in the UK - and daytime temperatures were around 10-12C.   On 19 April the plum trees were in full bloom and the apple tree was coming into leaf.

At home the Hellebores  were coming to the end of the flowering period but the tulips were now coming into full flower.
On the allotment, on 21 April we saw first signs that the asparagus was alive...
...and we also had a plentiful supply of rhubarb - so there is more rhubarb and ginger cake to be made.
It had been several days since we had any rain and the ground was very dry, so I got the hosepipe out to give everything - especially the potatoes and asparagus a thorough watering.
During the week, I transferred several seedlings to the min-greenhouse but continued to sow more seeds at home!  I have made some early indoor sowings of squashes, courgettes and cucumber.
The table in the conservatory is full again despite the transfer of several pots to the greenhouse and to the front porch.....
... and some have had to go upstairs to a spare bedroom. It's just as well that, due to Covid restrictions,  we can't have visitors!
Last year I grew some pink narcissi in the garden and, when they had finished flowering, I lifted them and put them in a large pot. When the foliage had died back, the pot was put behind the shed and forgotten about - so we had a pleasant surprise rediscovering them and towards the end the month as they were in full flower and the pot has been brought out of hiding for all to see.
23 April, St George's Day, was another fine spring day, although still chilly.  I spent some time at home in the garden sowing some maincrop peas in plastic guttering.  Once they have germinated and grown a few inches they can be slid out into their permanent home, which will be a raised bed on the allotment that I need to prepare.
24 April and May is only a week away so I have given some thought to planting out some of the brassicas.  According to the instructions on the seed packets, Collard, purple kale and Cavolo Nero can be planted out in April but purple sprouting broccoli, kalettes and Brussels sprouts  should wait until May. My sprouts and kalettes, however, look at least as advanced as the Collard  greens, so I am taking a chance and planting some out this weekend.
As I am growing them in a raised bed, I am also ignoring the advice on spacing and planting them out closer together than recommended.  The recommended spacing for Collard greens, purple sprouting broccoli and Brussels sprouts is 2 feet (60 cms);  kalettes  30 ins (75 cms);  Cavolo Nero  18 ins (45 cms)   I have reduced this, on average, by up to 6 inches (15cms) but will need to remove the lower leaves as they grow to ensure good air circulation near to the ground.
Some of the runner beans in the greenhouse are now 10 ins (25 cms) tall and I will risk planting these out soon, filling any gaps with directly sown beans in a week or so.
I plan to grow some climbing French beans, so need to sort out a frame for them too.  Whilst in frame mood, I need to decide where to put the frame for the cucumbers which should be planted out in June.  It sounds like a busy weekend!
The second early Nicola potatoes were rising above the surface and will need earthing up shortly.

At home more tulips were coming into flower 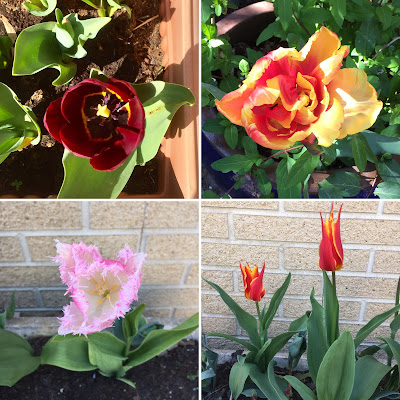 27 April was another fine day but with temperatures still below the seasonal average and it was revealed today that this month has been the frostiest April for 60 years; so it has really not been a good month to harden off tender young plants. It has also been one of the driest Aprils in recent years.  The level of water in our pond is very low and we could do with some April showers.
Despite the relatively low temperatures, I decided to press ahead and plant out some of the more mature brassicas - Collard greens, Cavolo Nero, Kalettes & Purple Sprouting Broccoli (Santee), covering them with improvised cloches of cut down plastic bottles.  I had already planted out some curled purple kale a few days earlier.

I had finally got round to making a sign for my side of the plot - 247/2.  Sylvia's is a work in progress.
The red currants were just coming into flower as was the apple tree.

At home the tomatoes had outgrown the pots they had been sown in and, although it was too soon to put them outside, I potted them on into larger pots.  At the base of the pots I added some plant compost mixed with a crushed aspirin and half a teaspoon of bicarbonate of soda and magnesium sulphate (Epsom salts). The aspirin guards against disease and the bicarb and Epsom salts provide essential minerals.  If I had any bananas, I would have added a bit of banana skin to provide essential potassium as well as nitrogen, phosphorus and magnesium. I did add a few crushed eggshells which provide calcium and good drainage for root development.
When I next have some banana skins I will soak them in a bottle of water for a week and then use the water as a liquid fertiliser both for the tomatoes and peppers but also house plants.  The remaining banana skins can be dug in to the ground or added to the compost bin/heap.
Epsom Salts can also be dissolved in water - one teaspoon of Epsom salts per litre of water - and used as a liquid fertiliser or leaf spray for tomatoes and peppers.
On Wednesday 28 April I picked some of the mustard greens to add to a stir-fry that I was cooking later that day.
On the last day of the month the Queen of the night tulips obligingly flowered, providing a cheerful end to a rather chilly month.
Hoping for warmer weather in May!