and in the garden

Last month had been the frostiest April for 60 years.  It had also been one of the driest, so many of the plants were a bit behind. May appeared to start well but then disaster struck with 60 mph cold winds!  The nice new mini-greenhouse went the same way as the polytunnel.  It couldn't withstand the strong winds and took off.  Fortunately the frame remained intact, and the cover sustained only minor damage as it caught on the plum trees.  I am sure we can patch up the small holes with repair tape but we will delay trying to put it up again until the weather improves.
There were clear skies on Saturday 1st and I was able to make a start clearing the area where the brassicas had grown in preparation for planting out the squashes, courgettes and cucumbers and also making room for more beans.
There was, of course, the annual battle against bindweed and couch grass and in particular, removing it from around the gooseberry bushes.  But after digging out the perennial weeds and hand weeding newly seeded annuals I forked in some some organic  material - partially rotted down compost from my compost bins.  It felt like good progress.  Much of the plot is raised beds where we pursue a "no dig" policy and I am hoping to extend this to the rest of the site.
We were still able to harvest some edible material from the kalettes and broccoli before chopping the woody stems to add to the compost bins.

I had removed the cage and netting that had protected the broccoli and kalettes from the pigeons and used it to cover the blueberry bushes which were just coming into leaf.  The blueberries are growing in large tubs as the South Downs soil does not suit them.  They are growing in ericaceous compost and we also feed them from time to time with an fertiliser suited for rhododendrons and azaleas.
I carried on with the task on Sunday which was another clear, dry day.  The apple tree was now covered in budding blossom and it felt more spring-like.

All four rows of potatoes were now through - two of first early Duke of York which I had already earthed up and one row each of second earlies, Nicola and Charlotte which also needed to be earthed up.
On the May Day Bank Holiday (3 May) the weather turned bringing heavy rain and strong gusting winds.  On Tuesday 2 May we visited the plot to see the damage.  The broad beans had held up well but the min-greenhouse had come down in the storm, scattering all the seedlings and plants to the floor.  After rescuing the greenhouse cover, which had a few repairable tears, we inspected the frame and were pleased that, although it had come apart in some places, it was still intact and could be re-erected.  The rest of our time was spent picking up the plants and we were able to re-pot those which had been disturbed.  Surprisingly few had been damaged and the brassicas and chillies had survived but the runner beans had not fared so well.
Last year I had bought some runner bean plugs from a garden centre which had been very productive and at the end of the season we saved some for the seeds. They were French/runner cross varieties: Moonlight , Firestorm and Tenderstar  We had sown these indoors last month and then had moved them to the new min-greenhouse.    As a back-up we had bought some more runner cross seeds (Moonlight and Firestorm) earlier this year and had also sown a few indoors and transferred to the mini-greenhouse.  Sadly these had all fallen to the ground when the greenhouse cover blew off and some were damaged so we decided to take a risk and plant them out.  We will fill the spaces between with directly sown seeds so we hope to have a succession of crops or a back-up if the earlier ones fail.
At home the conservatory, porch and windowsill in the spare bedroom were full of seedlings and rather leggy plants, so on 6 May I decided it was time to try hardening off some outside during the day.
A brief dry spell on 9 May provided an opportunity to plant out some of the brassicas, Brussels sprouts, Collard greens, Kalettes & Purple sprouting broccoli and to erect the net cage to protect them from the pigeons.
The apple tree was now in full blossom

The Silverbeet Chard was mostly looking very healthy, but some showed signs of bolting.
The potatoes were looking good but the plot was in need of a good tidying up. I just need a few dry days!
Back at home, as the early tulips were just finishing, new later varieties began to appear.


With a brief respite from the rain on 14 May a quick visit showed that most of the runner beans were surviving - just!

None of my parsnips had germinated, so I resorted to buying a tray of seedlings from the garden centre.  I was also tempted by a rainbow mix of beetroots and planted out both.

We still had a surfeit of chard!

After one of the driest Aprils on record, May brought heavy rains which were welcome but unfortunately accompanied by cold winds.  I had planted out some tomatoes in tubs in the garden but sadly most of them suffered from windburn and it is doubtful whether they will recover.
It was too wet to do much on the allotment but, between showers,  I did manage to harvest some silver beet and rainbow chard.
The cold and rain were forecast to end around 25 May and the front garden was beginning to look spring like and colourful
On 26 May, with the change in weather and a good outlook forecast, I ventured to the allotment and took the opportunity of planting out some of the rather leggy plants that were hardening off at home.  As the winds had also dropped, I had contemplated putting the cover back on the mini-greenhouse - but all these plans had to be abandoned as the heavens opened and I retreated to the shed.
The weather took a turn for the better on 28 May and the crops, particularly the potatoes, had benefitted from the rain.

At last, the broad beans appeared to be filling out

I also took the risk of planting out some cucumbers.

The mangetout peas were flowering and some pods already setting.  These were Oregon variety and I had acquired the seeds for free (with a voluntary donation) from the community organised Seedy Sunday, seed swap which had not taken place due to Covid lockdown. 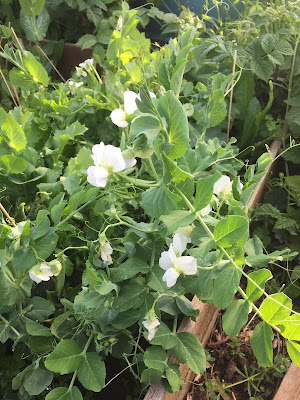 On 30 May, with the arrival of warmer weather and the prospect of frost hopefully gone, I risked planting out the home-sown courgettes.
Back at home the alliums and irises were flowering in the front garden
When I planted out the potatoes, I had a few spare so during March and April I had planted the surplus in grow-sacks.  This is how they looked on 31 May - from left to right, second earlies Charlotte & Nicola and first earlies Duke of York.

April and May have been difficult months; not very spring-like!  Hoping for some summery weather in June.