Life on The Weald (and still "shielding") - July 2020
Covid-19 is still with us but there have been some general relaxations in lockdown for the majority - but not for us as I am over 75 and in the "clinically extremely vulnerable" category.  I am able to go to the allotment, however, as I can do this without having any contact with the public, and can maintain my plot without coming into close proximity with anyone.
The government's "shielding programme" is due to end next month but we will probably continue to follow the shielding advice until the epidemic appears to be over or a vaccine is available. The allotment will continue to be our only escape from home!
The temperature in July has been above average and apart from the last week, which saw some heavy downpours, has been very, very dry necessitating several trips to the allotment for watering.
During the hot dry days, the birds had feasted on my brassicas so it was time for drastic action.
As the blueberries and redcurrants were finished, we moved the fruit-cages to protect the kale and broccoli.
Hopefully the mesh will be fine enough to keep away most of the butterflies.
I had grown the kalettes, kale and broccoli from seed but had forgotten that I had ordered some plugs from the garden centre which arrived this month.  I potted these on and kept them at home as I had nowhere to plant them out until the second early potatoes are lifted.
Luke came (socially distanced of course) to help try to remove an unwanted ornamental bush that had assumed tree-like proportions.  Whilst clearing the undergrowth he got a bit of a shock as he spotted a black tail - but what could this monster be?  After the initial shock it turned out to be a discarded toy dinosaur, presumably left by a pervious plot holder. 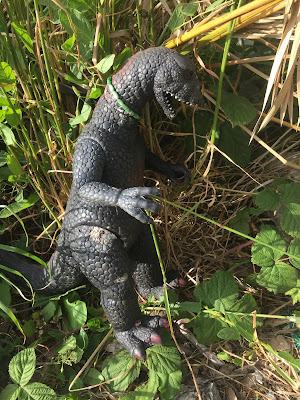 Monster in the undergrowth

We harvested the last of the Broad beans but were now seeing the peas come to fruition. 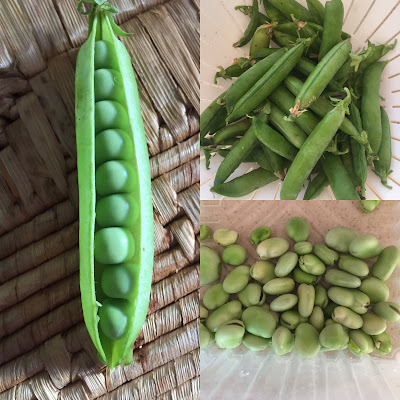 July pickings of peas and broad beans - 2 July 2020
I managed to plant out my first double row of leeks (Musselburgh) which I had grown from seed.  I planted them where we had recently lifted the First Early potatoes, 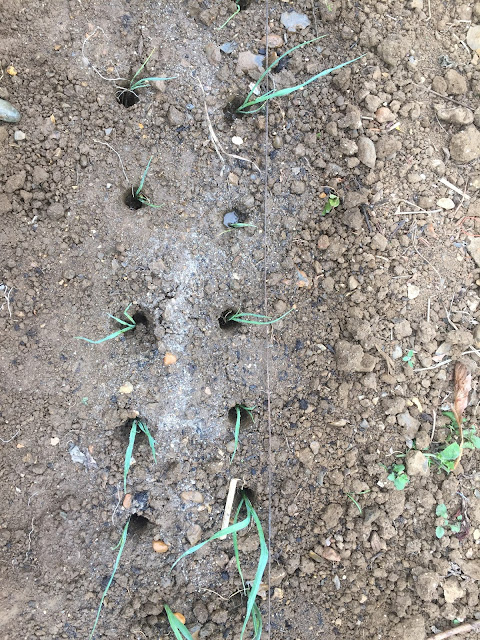 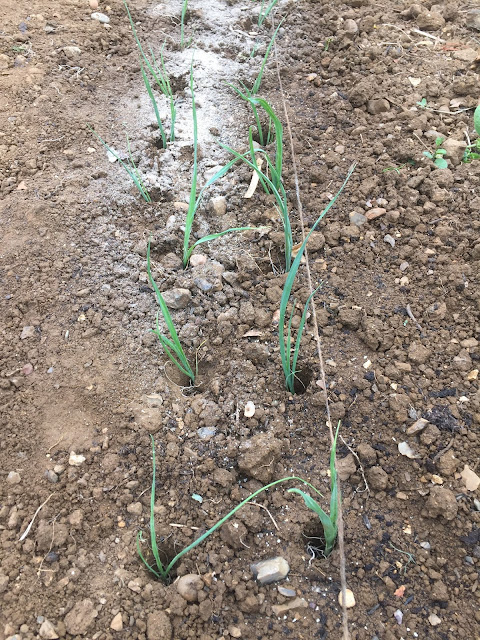 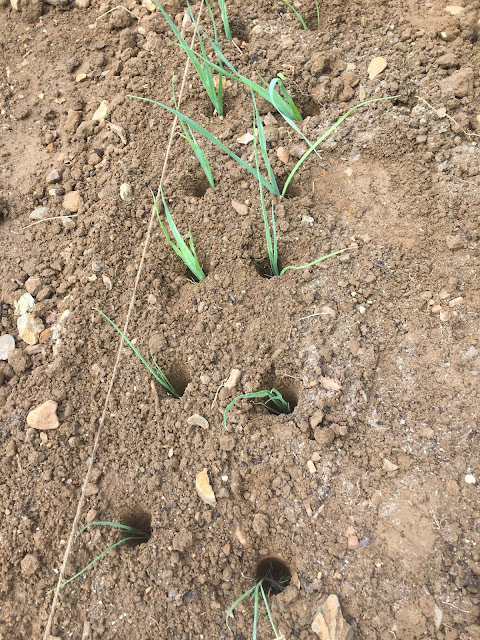 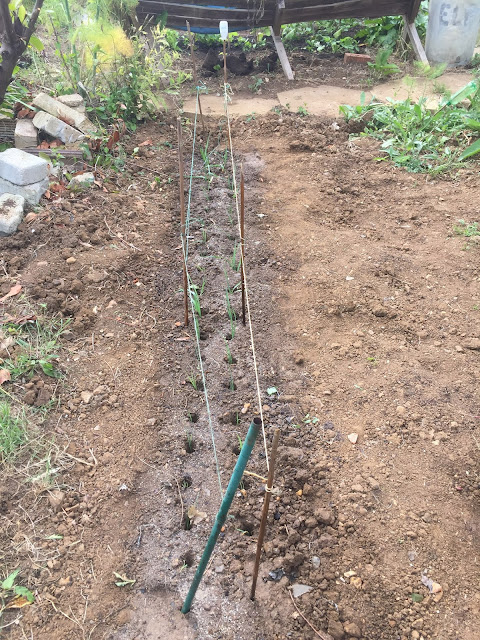 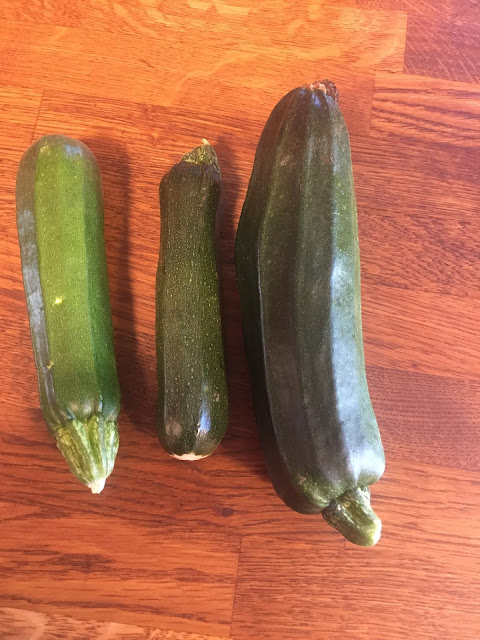 The first courgettes - 11 July
Back home the Mulberry bush (grown in a pot on the patio) was producing fruit. 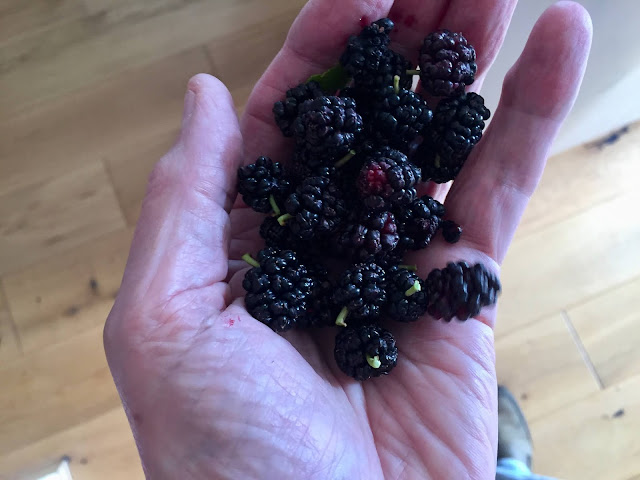 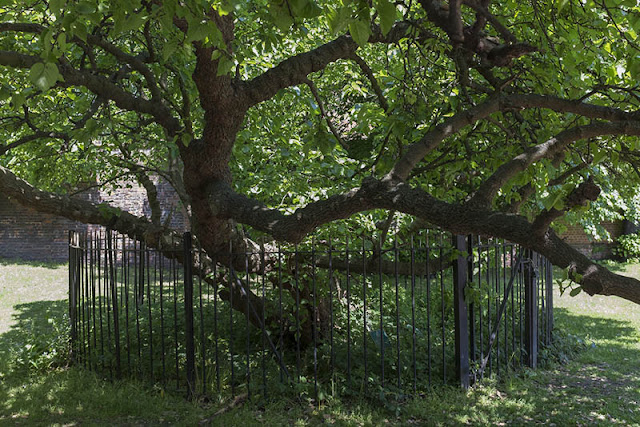 Charlton House SE7, The Mulberry Tree
The tree is almost certainly as old as the Jacobean mansion (which was built between 1607 and 1612) and is one of several in the SE London area, notably at Greenwich Park and Sayes Court in Deptford.
I do not expect mine to live as long - it is a new bush variety, Charlotte Russe, which was developed recently for the Chelsea Flower Show.
We are currently self-sufficient in potatoes and have been enjoying the Duke of York first earlies for several months. 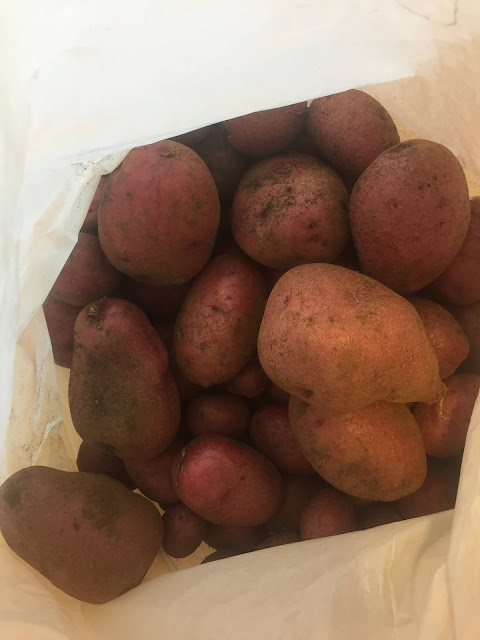 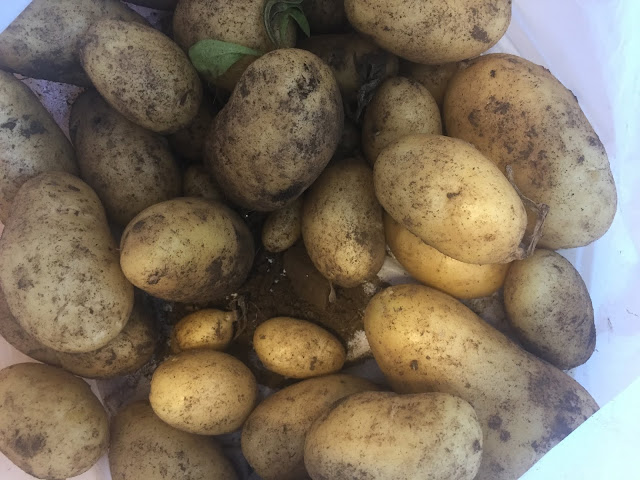 11 July Nicola second Earlies
The corn cockle and other wild flowers were beginning to flower in the area I had set aside near the pond.  Hopefully they will self seed and be more prolific next year. 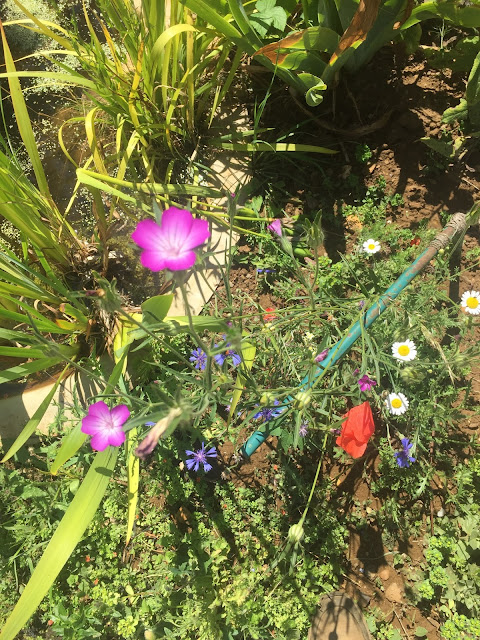 Wild Flower garden 13 July
The grapes growing on the vines (in pots) by the shed were beginning to bear fruit. 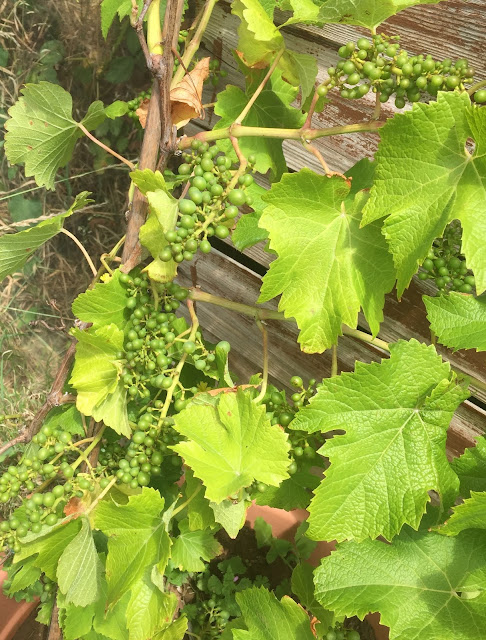 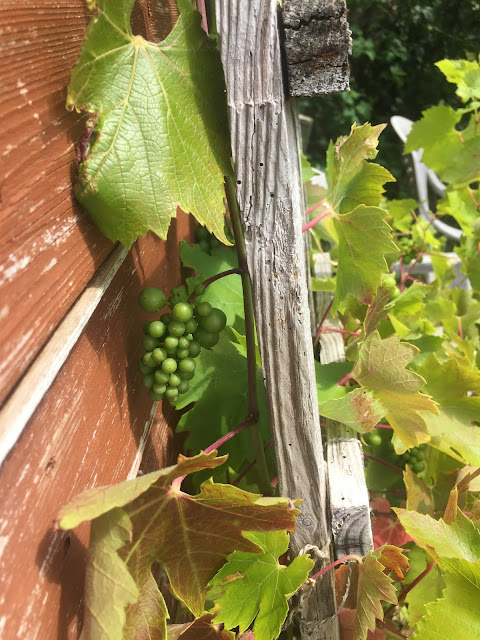 Black grapes - 13 July
The Patty pan squashes were beginning to produce prolifically and it is best to eat them whilst small. When they are very young we just slice them and grill or fry them or cook them on the barbecue.  As the skins get tougher and the seeds begin to form, its better to scoop out the seeds to stuff and roast them.
I have never been successful in growing tomatoes on the allotment.  They either suffer from blight, get eaten by squirrels and slugs or fall victim to the winds.  Last year we had a good crop of cherry tomatoes in pots on the patio at home, so this year we have been more adventurous and apart from some red cherry and golden cherry tomatoes grown from seed we have also tried a beefsteak tomato, some cherry plum and black cherry tomatoes as well as a familiar salad variety, Alicante, from seedlings offered to me by other plotholders. By mid July they were displaying fruit.  I had removed some of the lower leaves and shoots growing in the axils and trained the tomatoes up strings attached to the fence. And this seems to have worked well.
The unwanted bush was defying efforts to remove it and I fear a chainsaw will be required.

But the courgettes and butternut squashes looked to be doing well

And the Crown Prince, the pride of all squashes was swelling nicely.

At Home, I had grown some Lollo Rosso and oak leaved lettuces in a container and whilst they were ready for harvesting, some had begun to bolt.
At the allotment we were harvesting runner beans an French beans daily and I was very pleased that our purple variety of French beans did well.

And there is a plentiful supply of courgettes which need to be picked before they become giant marrows!
At home the container grown peppers were beginning to ripen and we look set to get a bumper crop of Hungarian yellow wax peppers,
These are very mild peppers, low on the Scoville scale, and suitable for pickling or stuffing.
The tomatoes, growing in various pots and containers at home are setting and hopefully we will get a good crop in the coming months.
The herb garden at home is doing very well and the winter savory is in full flower and attracting a large number of honey bees, so I have taken some root cuttings and potted them up.  I hope they will take as I intend to plant some on the allotment to accompany the grapefruit mint and pineapple mint that I have already transplanted there.
I think that "winter savory" is a misnomer as it is an evergreen perennial which flowers in the summer. I assume it is called winter savory because it survives the winter and to distinguish it from the related "summer savory" which is an annual.  It loves sunshine and does best in a well drained soil, so I will have to prepare its planting spot well as much of my plot is heavy clay.  Apart from attracting bees, the plant is beneficial as a companion plant to beans as it keeps bean weevils away.
The relocated fruit cages have done a great job in protecting the brassicas from the pigeons (and hopefully will have kept some of the cabbage white butterflies away), so I have decided to copy several neighbours and provide protection for some of the raised beds using water pipe as a support for the netting.  I have purchased 25m of 25mm blue polypipe (MDPE) to make the necessary supports and made a start at the end of the month.
The pipe is cut into equal lengths, depending upon the height that you need.  If it is a low tunnel, the pipe ends can just be pushed into the ground but to make them more secure a length of cane can be inserted into the pipe with sufficient protruding to press further into the ground to anchor the pipe.  The frame is made more secure by tying a cane, horizontally along the top, to which the netting can also be attached.
Well that brings the month of July to a close - more netting needed for August and then we can enjoy the fruits of our labours as many more crops are almost ready for harvesting.
John Austin
Hove, July 2020