There were few apples this year but an abundance of plums and soft fruit so we decided to combine them to make some mixed fruit jam.

We had been picking courgettes throughout July and they were still cropping well.  We also had signs of several Butternut squashes and whilst not as large as I had hoped, a couple of Crown Prince squashes.  The Patty pan squashes were very prolific, just one plant but successive pickings.

At home we had daily pickings of tomatoes, mostly cherry varieties, from plants grown in containers - and thankfully no sign of any disease.

On the allotment we began to lift the second early Nicola potatoes and these also proved to be disease free and also untroubled by slugs.
Some of the climbing French beans were ready for picking and the Borlotto were looking good too.  They can be picked at this stage whilst the beans inside are still soft and used rather like flageolets but as we have no shortage of fresh vegetables I decided to let them mature so we could dry them and use later in the year as a pulse food.

At home, I had watched my beefsteak tomatoes begin to ripen and was looking forward to harvesting the first one.
But such a shock when I picked it as it collapsed. The whole of the underside had been eaten by slugs and the inside was now hollowed out and inhabited by woodlice!   Time to get the beer trap working.
Back on the plot, the days were growing shorter but there were still plenty of fine light evenings and after some hard work it was nice to sit by the pond....
....and on fine days to enjoy the sunset.

In mid-August we were picking courgettes daily and finding interesting ways to use them. One of our successes was to grate them and make a courgette and lemon drizzle cake.

At home we had a plentiful supply of yellow wax Hungarian peppers.  They are a mild variety and can be eaten as they are or left to turn orange or red.
The hotter, purple cayenne peppers were also doing well, both at home and on  the plot.

The runner beans on our wigwam were in full flower. I had bought these as 12 plugs of three French runner cross varieties: Moonlight , Firestorm,  a red flowered variety and Tenderstar,  They produced much better than my home sown runner beans which were less prolific and tended to be stringy.

The borlotto beans  were ripening nicely....

...and the squashes getting bigger.

It was time to check on the squashes

Whilst the butternut squashes were performing much better than I had expected, the tromboncinos were disappointing.  Only two had set on one plant, one of which was beginning to swell.....

....but a second plant proved not to be a tromboncino at all and I have no idea what variety it is.

Later in the month we were still harvesting - and giving away plums - and we seem to have overcome the brown rot disease that we had seen last year and with early crops this year.
And when we cut them open they were almost all free of any insects or maggots and virtually no waste.

And what a joy!  At home,  a summer flowering bulb had opened to herald my birthday.
And more flowers and cards arrived at home by post.

And almost as a special treat for my birthday, one of the Hungarian yellow wax peppers turned red!

I decided it was time to see how the Charlotte potatoes were doing which I had planted in the garden where I had removed the lawn. Initially the news was good and they looked more than ready for lifting.

On the allotment we had a plentiful supply of chard, courgettes, cucumbers and rhubarb.
The leeks were coming on and beginning to swell and I gave them a liquid feed of diluted "worm tea" from our wormeries. 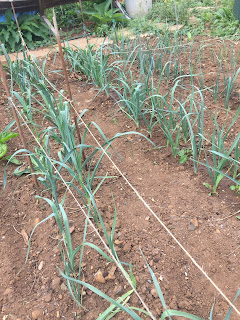 The kale was also looking good, but this year we have had a rather heavy infestation of white fly. I have sprayed the crop periodically with a soapy water solution but this seems to provide only temporary relief.

The leaves look undamaged though.  When I pick them, I shake them a little so as not to take too many whitefly home as they are a bit of a nuisance flying round the kitchen.  When I get the kale home, I wash it immediately leaving the leaves to soak in the sink for 15 minutes or so with the addition of a couple of squeezes of distilled vinegar, then rinse thoroughly, drain, wrap in newspaper and place in the salad drawer of the fridge.  This seems to get rid of the whitefly and the leaves keep fresh for a few days.  It's also a good way to keep fresh parsley or coriander which seem fine for several days.
Earlier in the year I was pessimistic about the plums as we seemed to have the same brown rot disease that we had last year.  Although the early crop was affected, the later crop seems fine and disease free.

We then experienced very high winds  causing a lot of fruit to fall to the ground. This was the scene on 26 August...

A few remained on the tree and we did manage to harvest them.
Back at home, I began to lift the Charlotte potatoes.  It was at this point that my optimism and good cheer began to fade as quite a few were infected with wireworm which are the larvae of click beetles and apparently very common on plots converted from grassed areas.


About one third of the crop was affected, the good potatoes were excellent and we were even able to salvage some potato from the infested ones.

Hopefully the pumpkins and squashes will be ready to harvest and store next month.

With all those plums in the fridge (and lots in the freezer and some in jam), it was time to do something with the best ones so I decided on a simple plum tart (or flan).

On the last day of August, we gathered more patty pan squashes
I decided to clear some of the raised beds which had now finished cropping. There was one where I had sown beetroots and parsnips.  There had been a poor crop of beetroot and I put that down to the bed being invaded with suckers from the nearby raspberries.  I had given up on the parsnips as I thought they had all failed to germinate.  The bed was now overgrown with annual weeds.
I began the task of clearing it by removing the weeds and digging down to remove as many raspberry suckers as I could find, but to my surprise, having removed the weeds, found two parsnips growing!

So the month ended on a happy note 😀
During the rainy days, I had been sorting through old photographs and came across these two which are from the late 70s. One is me with with my eldest son, Damien, who is now 48!!! And the other is Damien with his younger sister Zoë

The cabbage was grown on the Cherry Orchard Allotment in Charlton (Greenwich).
As summer comes to an end and autumn approaches, there is much to be done before the harsh winter sets in, to prepare for the new year. Let's hope the weather in September and October is kind.
John Austin
Hove, August 2020