Broad beans - they're my faves!

(Thanks to Caroline Bull for the headline pun)

Broad beans did not feature in my childhood diet and yet they have come to be one of my favourite vegetables.  My wife, Sylvi, had also not experienced broad beans in her childhood diet but first came in contact with them in the early stages of secondary school in biology lessons on reproduction - the sex life of the broad bean.  My encounter was later, in botany in the lower sixth, when we were studying negative and positive phototropism and geotropism - but I still hadn't tasted one!  They weren't included in school dinners and I had never seen them in the local greengrocers or the Co-op.

I think my first taste came in my early twenties and I wasn't greatly impressed as they must have been rather old - they were dry, fibrous and fairly tasteless.  Soon afterwards, however, I discovered younger ones which hadn't been boiled to death and I became an ardent fan.

In my late twenties, I discovered that they were easy to grow on the allotment which I then had in Charlton.  Like most allotment produce, a lot come all at once when friends and neighbours become beneficiaries - but fortunately, broad beans are one of the vegetables which freeze well without impairing either the texture or the flavour.  You just need sufficient space in the freezer.

The pictures below are of last year's crop in Hove. 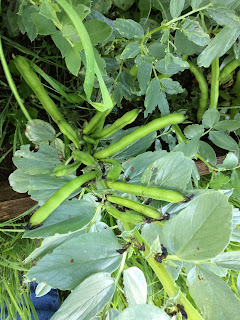 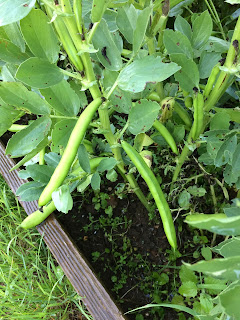 I have tried sowing them in November/December and February/March.  November sown beans will crop two to three weeks before those sown two to three months later - but the great advantage is that they usually crop before the blackfly arrives.  This year the crop from the ones sown last November has been excellent but the February/March sown crop has been a great disappointment.  I think that in future I will sow more broad beans but only in November.

In view of the favourable comments about my broad beans from friends in France, Spain and Italy, I decided to devote a blog to this great leguminous vegetable. In France they are known as fèves, in Spain habas, but faba in Galicia and faves in Catalonia and Valencia and also faves in Italy.

Broad beans are very nutritious.  Fresh beans, whether cooked or raw, are a good source of folic acid, iron, manganese and dietary fibre. Fresh or dried, they have no saturated fat or cholesterol and contain a high concentration of thiamin, vitamin K, vitamin B-6, potassium, copper, selenium, zinc and magnesium. They are also an inexpensive source of protein.


Another plus is that, when growing, broad beans have a symbiotic relationship with nitrogen-fixing bacteria in the soil which thrive on nodules on the beans' roots.  Nitrogen from the air is converted into other nitrogenous compounds which are deposited in the soil and which will benefit both the growing beans but also next year's crops that are grown in the same spot, without the need for artificial nitrogen rich fertilizers.  This is one of the reasons why crop rotation (which I wrote about in January) is so important.

In England, broad beans tend to be served plainly boiled or steamed as a vegetable accompaniment to a main course. In Spain they are often treated as a dish in their own right - often cooked with serrano ham as habas con jamon - one of the most delicious tapa, or with chorizo. In Murcia, I have had habas con morcilla, broad beans with black pudding (blood sausage) - and good it was!

Dried, they have been an important part of the food supply across the Middle East and north and east Africa for centuries. In Arabic they are alfawl, and appear in recipe books and menus as fawl, fool, fūl, fuul or foul - most notably seen in the famous Egyptian dish, Fūl midammis  (or just ful or ful medames), eaten widely across the Middle East at breakfast time. Egyptian falafel, taameyya/ta'ameya, said to be the original are made with fava and not chickpeas.

The basic ingredients of fūl are soaked and cooked dried fava beans with olive oil, garlic and cumin. There are very many regional adaptations and it is a classless dish.  I have eaten fūl for breakfast in Aleppo, Damascus, Cairo, Amman and various places in Lebanon and Palestine as well as a side dish in Ethiopia. I have eaten fūl in 5 star hotels, hostels, on the street and in refugee camps.
Fūl may have many added ingredients such as chopped parsley, onion, lemon juice, chili pepper or harissa, Za'atar (Zatar/Zaatar) and other vegetable, herb and spice ingredients.

I am posting two recipes - one using fresh beans, habas con jamón and one for dried beans, Fūl midammis.