We missed the end of June and the beginning of July on the allotment as we had escaped to the sun in Spain – just in time to coincide with the heat wave at home!  Thankfully, Luke was on hand with the hosepipe and prevented total disaster.  But after a very wet and cold winter it has been one of the driest and hottest periods on record in southern England. 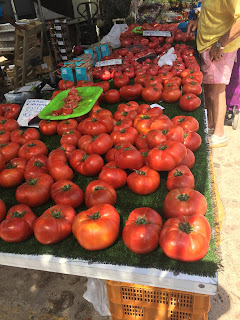 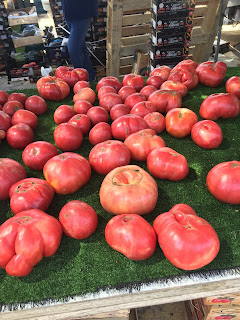 No, these are not my tomatoes.  They are local from the area south of Alicante and north of Murcia and we found  them at the Lemon Tree Market, Montesinos/El Moncayo, south of Guardamar (Mercadillo de Campo de Guardamar) 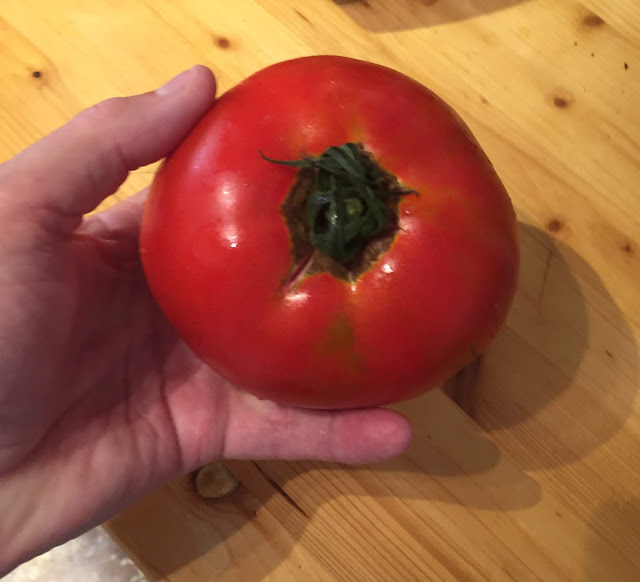 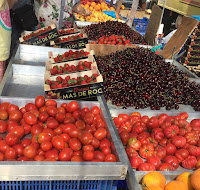 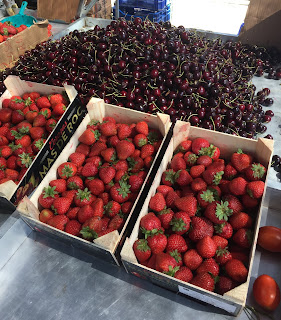 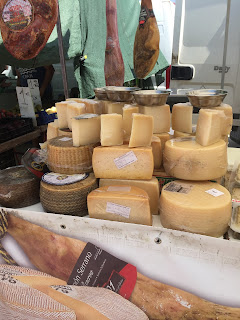 After a week of superb vegetables, fruit and seafood...... 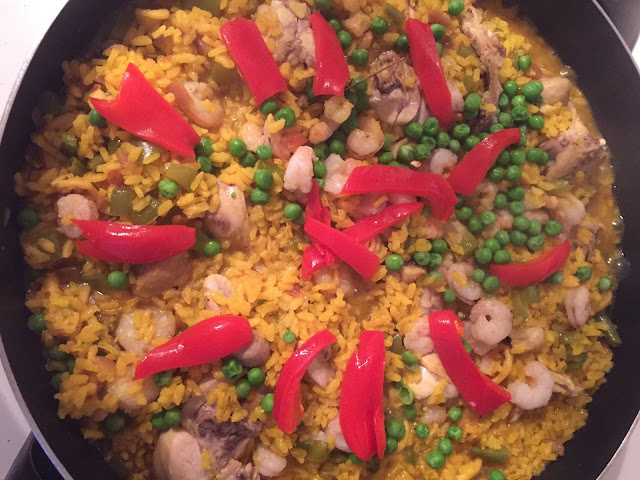 ................we returned to England where the heat wave and drought continued throughout July.

In June  I had planted a grape cutting given to me by my eldest son, Damien, taken from the vine in our old home in Charlton.  It had been grown from a cutting from the vine that grew at the old Mind day centre at Ormiston Road in Greenwich and had been taken in the 1980s!  More than 30 years later, my new cutting seems to be thriving and I need to clear a spot in the wilderness around the shed on the allotment to transplant it. 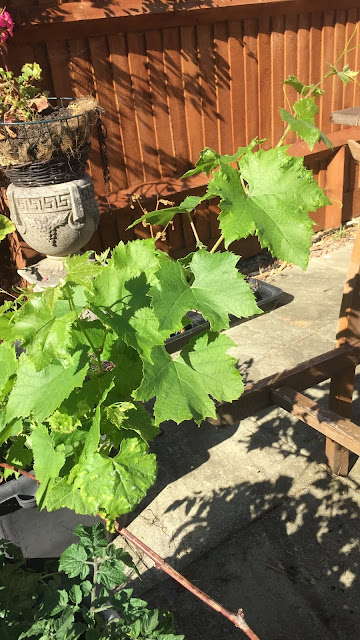 On our return to the UK, we found the cardoon in full bloom.  It is majestic and beautiful but once it has flowered, I fear it has to go.  It is useful in attracting bees when in flower but it takes up too much space and consumes a great deal of water.

As a result of the drought the foliage on the onions and potatoes has died down earlier than expected but the onions are a decent size and looking healthy.


Sadly, however, the shallots have not fared so well and are much smaller than last year..
....and the same is true of the garlic.
I think I must have been away at a crucial time when they needed watering as the foliage had all died back by the time we returned from holiday.  On the good side, we have harvested our first crop of outdoor cucumbers and they taste great.

I lifted the first row of Charlotte potatoes.  Fortunately, unlike the Rocket crop, they had not been attacked by slugs but they were rather small, which is clearly the result of the drought.  Having cleared the area where they had grown and the area where I had lifted the Rocket potatoes, I planted out my first batch of leeks. I must make sure to water them regularly during the early stages to get them established.  I planted them out in a traditional method, making a hole about 6 inches deep and dropping in the young plants - not filling in the soil but watering the hole regularly as the soil naturally falls back in as the leeks expand.  If the plants had been bigger, I would have made deeper holes which would have given more white part, but I will gently earth up as they develop with compost to increase the white content.


Fruit has also been a victim of the drought and the berries are much smaller than usual.  This may also be partly due to the fact that I moved and transplanted the bushes last autumn and they may not have had time to fully establish.

I find picking blackcurrants very tedious, which is a pity because along with raspberries they are one of my favourite fruits.  Luckily we enlisted the help of my nephew Charlie and his partner Fran to do some of the picking.

We also removed the nets from the blueberries and then picked our first harvest. The blueberries are growing in large pots as they will not thrive on Sussex soil, so they are grown in ericaceous compost and occasionally fed with a liquid feed that I use for the camellias at home.

Although there are lots of cabbage white butterflies about, our kale (cavolo nero - Tuscany black) and purple sprouting broccoli appear to be caterpillar free (so far) but I am aware from past years how quickly that can change and with devastating consequences.

Cavolo nero is said to be at its best after the first frosts in October but it is cropping well and I see no reason to wait, so we have had our first pickings - and it was very good.  The beauty of cavolo nero is that it is a cut-and-come-again vegetable.


In order to conserve water and stop erosion, I have mulched as much as possible using grass clippings from the lawn at home between the rows of potatoes and using the wood chippings provided at the allotment on bare ground and around established plants.

Wood/bark chippings are a useful mulch as they slowly break down adding nutrients and texture to the soil. It is not advisable to use wood or bark chippings as a mulch around young plants, however, as in the process of breaking down they will rob the young plants of nitrogen.

We have the benefit of 3 wormeries where we compost all our vegetable kitchen waste plus shredded paper and old egg boxes.  We have been spreading the composted material around our beds as a top dressing and mulch.  The liquid run-off from the wormery is a very rich fertiliser which we dilute and use particularly on the brassicas and chard - anywhere where we need good leaf growth.

The climbing French beans were coming along and between the two rows I had planted a pumpkin hoping to train it out of the raised bed.  It is rampant with a mind of its own but I have just about managed to train it.

We also managed a small portion of runner beans from our first picking.

We lost a few more allotment days at the end of the month as I was involved in the Ride London cycling events over the last weekend in July.....

And then my daughter, Zoë, came to stay for a few days with her partner, John and his mother Lenore who was over from New Zealand.  I did manage to drag them to the plot on the last day of July, when they helped gather the last few blackberries and blueberries that were left.

John also managed to spot a couple of cucumbers

We harvested a few courgettes of reasonable size

whilst others were almost achieving marrow proportions 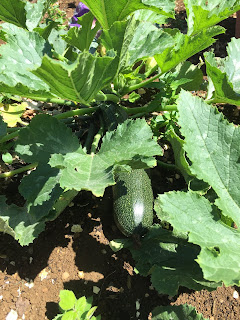 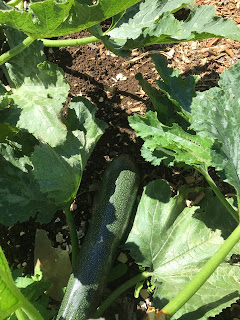 I suspect we will be making marrow and ginger jam, courgette cakes, courgette Soufflés, vegetable curries with courgettes and courgette soup during August !