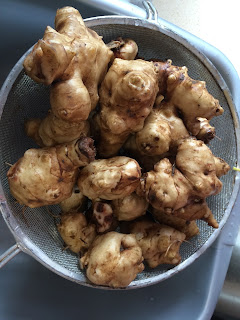 I had a couple of immediate responses to my blog onartichokes

Caroline Albery Love it! I had a lovely artichoke dish at Brindisi once, roasted & served with truffle oil & slithers of Manchego. Yum!
Sue Albery I made a very simple but delicious soup

I must try Caroline’s suggestion some time and await further suggestions.  In the meantime here are two recipes for starters which I tried this week. 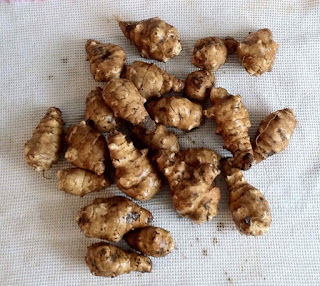 Method
Peel  artichoke tubers (you can leave the skins on if you wish but make sure they are well scrubbed and any soil removed). Slice into  ¼ inch/½ cm thick rounds and immediately drop into a bowl of water to which you have added some lemon juice (to prevent discolouration).

Chop the streaky bacon and fry gently in a little olive oil or knob of butter.  After a few minutes add the drained artichokes and sautée until golden.  Season with salt, drain and serve sprinkled with lemon juice and freshly ground black pepper and garnished with chopped parsley.
(Fried sage leaves also go well with this dish – see next recipe)

Scrub the artichoke tubers to remove any dirt and cut off any hard bits or straggly root. Peel and quarter them (peeling is not absolutely necessary provided all soil has been removed by scrubbing) and drop them into a bowl of water that has had some lemon juice or cider vinegar added. 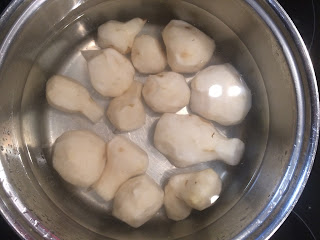 Gently fry the chopped onion in a little oil to soften but do not allow to brown. Add the chopped garlic and fry a little more to soften.  Wash and chop 2 leeks; rinse and drain the artichokes  and chopped leeks and artichokes to the saucepan and stir whilst continuing to cook gently for a few minutes.

Add the stock and simmer  until the artichokes are soft and begin to fall apart.  Allow to cool a little and then liquidise – it’s up to you how smooth to make it. Taste and season with salt and pepper.

Whilst the soup is simmering, wash the sage leaves, pat dry and place between two sheets of kitchen roll to absorb any additional moisture and put a board on top to keep flat and set aside for later.

Return the liquidised mixture to the saucepan and reheat.  And here’s the controversial bit.  Some people would stir in some double cream at this stage – say 100ml – for a cream of artichoke soup.
I don’t. For me the soup has a creamy enough texture without the addition of cream.  Another possibility is to add a swirl of cream or crème fraîche to each bowl (for those who want it).

Whilst the soup is reheating, heat a little olive oil in a frying pan and when hot add the sage leaves, a few at a time, in batches.  Fry leaves for 5-10 seconds then turn over and fry a further 5 -10 seconds and then drain on kitchen paper and they will crisp up.  You can either float one or two on each bowl of soup or crumble them on top and serve.

The quantities in this recipe are quite arbitrary and you can use more or less artichokes and more or less leeks – or none at all.  The artichoke flavour will usually dominate.

I described this as a starter but it is quite filling.  It makes a good and substantial winter lunch served with crusty bread.

Artichokes go well with other root vegetables so you can include swede/turnip, parsnip, carrot or potatoes, whatever you have to hand, such as squash, celery etc.  Try your own version – and artichokes go well with thyme as well as sage or you might like to add a little nutmeg or horseradish.

If you have a surfeit of artichokes (as anyone who grows them will) it’s a good idea to simply boil them and freeze the resulting mash or purée in small containers as a standby to be added to soups as and when you need it.