2 July At home the beefsteak tomatoes were doing well but the cherry tomatoes were only just coming into flower .  At the allotment, l lifted some of the garlic plants and brought them home to leave in the sun to dry out
I
3 July  My home sown Rudolph  purple sprouting broccoli had made little progress and looked poorly specimens. I did toy with the idea of getting rid of them but in the end decided to plant them out in one of the empty raised beds.  The Akito cucumbers sown last month had grown their second true leaves, so I also planted these out.  I put bottle cloches over both the broccoli and cucumbers to give them a fighting chance against pests.
4 July I harvested the rest of the garlic
In the garden I had spotted a rather untidy plant which I couldn't identify and assumed was a weed!  I did contemplate pulling it up but decided to leave it to see if it would flower to help identify it.
It was just as well that I left it, because a few days later it burst into flower -
a large flowered Evening Primrose (Oenothera).  I had completely forgotten that I had planted this a couple of years ago, before the pandemic.

Another strange plant had appeared during the pandemic.  It looked vaguely familiar but had now completely taken over a raised bed.  I discovered it was Houttuynia.
I then recalled that I had bought a very cheap selection of summer flowering plants from Lidl two or three years ago and this was one of them.  Houttuynia likes moist shady conditions which is why it is doing so well.  It produces adventitious roots and can regrow rhizomes from any part of the foliage and is considered an invasive plant.  I think we are stuck with it but am thankful it is in a brick built raised bed so won't take over the garden.  I have also learned that one of its common names is "Fish Mint"  and that it is widely used in SE Asia as a vegetable, a herb and in chutneys.  I have tasted the leaves and have to say that I didn't find it an entirely pleasant experience but I might think about how it might be used in Vietnamese, Chinese or Korean recipes in combination with other herbs and spices.
5 July I visited a garden centre to get some more potting compost but couldn't resist buying a few sad looking tomato plants which were being sold off and were in need of some TLC.  I took them home and potted them up with the addition of a sprinkling of bicarbonate of soda and Epsom salts - fingers crossed that they will recover and survive and hopefully bear fruit.  On the allotment the courgettes were looking ready for harvest.
6 July I directly sowed a double half-row of purple French beans (Tepee) and harvested half a dozen courgettes and lifted some red Duke of York potatoes.
I also spotted a caterpillar of the Cinnabar Moth.
I mentioned last month that we were not short of ragwort (stinking willie) on the plot and this is the main source of food for the cinnabar caterpillar and they do little damage to other plants. I have also seen them feeding on groundsel.
Later that week we attended a reception in London, which proved to be a big mistake. On Sunday 10 July we were due to attend a friendly cricket match at Windsor and we both took Lateral Flow Tests, which were negative, before setting off.  During the course of the day, Sylvi developed flu-like symptoms and barely made it home. The following day she tested positive for Covid and was very poorly and went into self-isolation.  I tested negative, however, and nipped to the plot that evening to do some watering.
On the morning of 11 July, again I still tested negative for Covid so visited the plot again.  It was 26C by mid-morning but, as there was no cloud and no wind, it felt much hotter. Despite having watered the night before, the ground was rock hard and it was difficult to make any holes with a dibber to plant anything.

I soaked the ground in my first Hugel bed and with some difficulty, I did manage to sow another half double row of Teepee purple French beans.  I had previously planted out the Tepee beans that I had sown at home and also directly sown some more seeds the previous week. I also sowed two half rows of green French beans in the raised bed where the mangetout and sugar snap peas had been earlier.

I picked several young courgettes, around 8-10 inches in length plus a couple of larger ones which were about to become marrows!  I began lifting the second row of 1st early red Duke of York potatoes. There was no haulm as the plants had completely died back and weeds had taken over. If I hadn’t left the string marking the rows, it would have been difficult to locate them.

The tromboncinos  had put on some growth and were beginniong to trail along the ground, so I constructed a tripod with wooden stakes for them to climb up, (if they ever learn to climb!) and then thoroughly watered everything.

The following day, 13 July, because the ground was so dry, I went to the plot at 7am to water everything again.  Despite the dry weather, the French beans I had sown a week earlier were beginning to germinate, and they desperately needed water.

I also transplanted a chilli, Hot banana, from a pot that they had outgrown to a raised bed.

By the time I returned home, around 9am, it was already 24C.  Later that day the tempreature reached 30C. I was feeling fairly rough so took another LFT test, which this time proved positive.  I soon developed all of the symptoms associated with the new Omicron strain of the Coronavirus.  So now both Sylvi and I were isolating at home for several days and unable to visit the plot or even leave the house.

There continued to be no rain and daytime temperatures remained in the mid to high twenties with a peak of 34-37C on 19 July.

It was not until 22 July that I tested negative and felt able to venture out. Whilst we had been indisposed, Sylvi's son, Luke, had been watering the plot in the evenings and picking courgettes.  Apart from a brief shower on 13 July there had been no rain for weeks.

The squashes had suffered in the drought. The fruits were tiny and a lot of the foliage had turned brown.

The pumpkin was looking more healthy. It isn't in a true Hugel bed but is growing where, 2 years earlier, we had dug a hole and buried a lot of organic material.

The French beans also seemed to be surviving the drought (thanks to Luke's evening watering).

I had been offered a tumble compostor by the plot run by a local nursery school. The only problem was transporting it as it was much larger than I had anticpated.
Thankfully, Luke came to the rescue and we (well, he) managed to move it successfully.

The problem then was where to put it.  My plan is that it should be out of sight at the back of the plot but that requires a bit of reorganisation.  It has been placed, temporarily in the middle of the plot where the Duke of York potatoes had been growing.

Whilst on the plot, I harvested some courgettes and climbing French beans for the weekend.

At home the Ornage habanero was beginning to set fruit and there was one large, very healthy looking specimen.

The Orange habanero is very hot, measuring between 350,000 and 500,000 on the Scoville scale.
The beefsteak tomatoes were beginning to ripen and I picked some to finish ripening indoors to give the others a chance to develop.  I also had one lone cherry tomato!
On the plot, the Jalapeño pepper was also ripening.  This is a fairly mild pepper, around 4,000-8,000 on the  Scoville scale (or so it says on the label!)
Picking some of the tomatoes before fully ripe, seems to have paid off as they had fully ripened indoors and the plants were becoming too top heavy.

When leaving the allotment about 2pm on 28 July, I spotted this creature in the distance.
I approached very slowly and the hog froze as I got near. 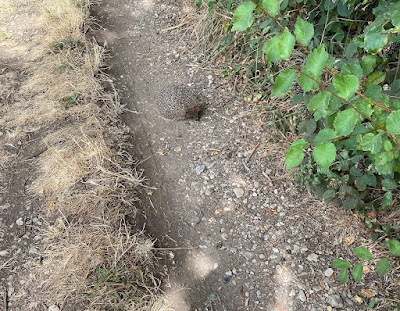 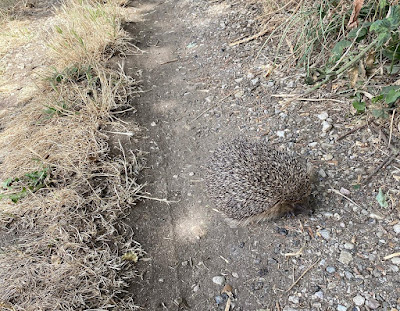 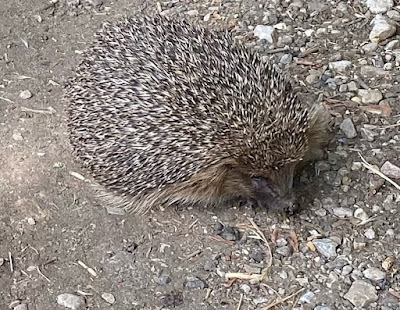 Hedgehogs are not usually seen out in the heat of the day and there might be reason to think it was distressed but as I backed away it scampered into the undergrowth. It's possible that it was dehydrated and searching for water.  A number of plotholders have encountered hogs in distress and many have now created safe water stations for them and other wildlife during the heatwave. Hedghogs are a gardener's friend as they do no damage to crops but do feed on slugs, snails and other creatures that harm our plants.  Most allotment holders are keen to support bio-diversity and encourage a balanced eco-system and other creatures such as bees, which are essential to life, also get thirsty in heatwave conditions and need access to water and there has been a great deal of information shared on our site about ways that we can provide safe drinking for wildlife.
As we approach the end of the month, there is no sign of a let up in the heatwave and no rain expected.  There is a possibility that a hose-pipe ban may be imposed so it has been important to fill all water-butts and any other containers with water in case the supply is cut off and to ensure a minimal amount of water remains in ponds.  Plot holders are discouraged from watering during the day as 90% can be lost in evaporation and water on the leaves in the heat of the day can lead to scorching. It is important to apply water to the base of the plant so that it has more chance of reaching the roots.  I have sunk a number of inverted plastic bottles (with the bottom cut off) next to thirsty plants. Filling these with water means the water gets down in the soil to the roots rather than lying on the surface and evaporating.
Mulching is also of high priority in these conditions.  Luckily we have a good supply of tree prunings and wood chips which I have put round the base of all our fruit bushes to conserve moisture as well as enriching the soil over time with organic matter.  Much to do in the coming days, whilst praying for rain!