Midnight - seeing in the New Year

New Year's eve was the warmest on record and that warm spell continued into New Year's Day which saw the highest temperatures ever recorded in the UK on January 1st.  The temperature in St James's Park London reached 16.2C, beating the previous record of 15.6C in Cornwall in 1916.  In Hove it was only a little over 12C but still very mild for the time of year.

Apart from checking on the potatoes, chitting underneath a skylight in the loft, we had a day of rest from our labours and settled down to watch the Charlton v Wycombe match on TV, live from The Valley.  With a 1-0 loss for the Addicks it was a disappointing start to the year 😞
2nd January was still mild and dry in the morning but soon misted over and rained later in the day.  We did get up to the plot in the morning and planted out the rather leggy broad beans that had been sown in pots at home.
Sylvi replaced the soil in the trench which I had dug in one of the raised beds a few days earlier and then added the contents of the bottom trays from the wormeries mixed with tea/coffee grouts and eggshells.

We didn't stay long as it looked like rain was on its way, but we were there long enough to pick some spinach, cavolo nero and kalettes and lift a Swede (turnip).

For ther next few days it remained warm for the time of year but with frequent showers and occasional heavy rain until 5 January when a more seasonal dry cold spell arrived with a maximum of 6C.   I ventured to the plot to prepare another bed to plant the Eden Rose garlic.  I had previously planted Vallelado organic garlic in November and these were now about 8 inches high.
With the windchill it felt more like 1C during the day but this was followed by sub-zero temperatures overnight and a heavy frost in the morning.  It remained cold on 6 January with unexpected rain in the morning. More heavy rain followed on Friday and Saturday but on Sunday 9 January we had clear blue skies and sunshine without any rain.  This gave us a good opportunity to do some tidying up and preparation of beds for spring sowing and planting out.
We used the opportunity to remove annual and perennial weeds and cleared the asparagus bed.  We cut down the autumn fruiting raspberries to the ground but also had to dig some out as they were spreading towards the raised beds and the rhubarb patch.   The sage bush had also begun to overwhelm one of the raised beds as well as taking over the central path.  We have been quite brutal in cutting it back but several of the branches had self rooted so we have a few rooted cuttings to re-pot as an insurance in case we have killed off the main plant which had spread over 2 metres.
We also began tackling the area around the red currant bushes where bindweed had spread.
We had a couple of spare recycling boxes and used these to form a cloche to force the rhubarb.

The bright clear weather did not last very long and heavy rain returned from the Sunday evening until the following Wednesday, but there was much to do indoors.
Last year's Super Mama and Corazon tomatoes had been a great success and as I had some seeds left over I sowed some Super Mama indoors. Last year the Super Mama produced tomatoes weighing 100 - 120g. Following the sowing instructions, I will leave the Corazon until next month.
Whilst in Spain last year, I had bought some seeds for giant beefsteak tomatoes, Marmande and Pink Giant Tres Cantos which can be sown indoors December-March, so I have sown some,

The Marmande seed packet says that it should produce fruits weighing 159-190g and the Pink Giant/Tres Cantos fruits of 400-500g.  We shall wait and see!
I also sowed some chillies, Chocolate Habanero and Basket of Fire from seeds left over from 2021.Only four days later there was a sign that the Super Mama seeds had germinated,
Two days later there was evidence that the other tomatoes had also germinated
Meanwhile, back on the plot, I decided to take down the bean and cucumber frames to clear the area in preparation for planting the potatoes.  The area was covered with many perennial weeds.

The broad beans which had been planted out on 2 January were making good progress
13 January was another fine day and the sun was shining. It was only 7C but it felt much warmer in the sunshine.  I popped down to the harbour in the morning to buy some fish....
It was perfect weather for gardening.....

....and  there was no shortage of weeds to be removed!
Back at home, on 14 January it was time to check the lemongrass which had been brought indoors having spent the summer and autumn in the garden.
The stems were difficult to remove but, with a sharp knife, I was able to cut off a couple just below the level of the soil, close to the roots.
Success!  It was obviously time to make a spicy Thai prawn soup, Tom Yum.
Of course this needed chillies and the Basket of Fire, that had been repotted from the allotment, was there to oblige.

I hadn't made any plans to grow onions this year but on 16 January, on
a trip to the garden centre I couldn't resist using a voucher I had to buy a trial set of shallots.  All I need to do now is find some space for them.
More fine weather on 18 January and it was time to do some more weed clearing.
The plot was beginning to look a lot tidier and there was now space for future planting of brassicas as well as potatoes.

I also managed to find some space in one of the raised beds to plant the shallots, which I then covered with fleece to enable them to establish roots without being pulled out of the ground by birds.
On 20 January I harvested more kalettes which were coming to the end of their season but also picked the first of the early purple sprouting broccoli.

A quick peek under the covers (inverted recycling boxes) revealed that the forced rhubarb would soon be ready for picking.

It was a chilly morning on Sunday 23, but it was warm and cosy in bed listening to BBC Radio 4 and little incentive to get up and go to the allotment.  I was listening to an interview with the likeable and impressive First Minister of Wales, Mark Drakeford, and then, at the end of the interview, he said he was off to his allotment!  Not sure if it was motivation or guilt but I decided that's what I ought to do!  It was very cold so the only thing to do was some healthy exercise to keep warm.  So out came the fork and the weed removal commenced.

The beginning of the week was wet and overcast but by 27 January it appeared more spring-like.  At home the Hellebores were beginning to show flower buds 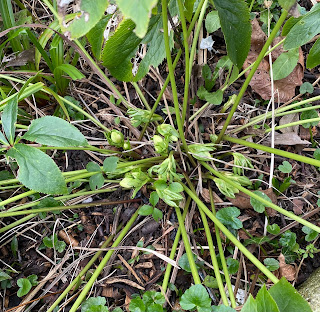 and the Camellias  were coming into flower. 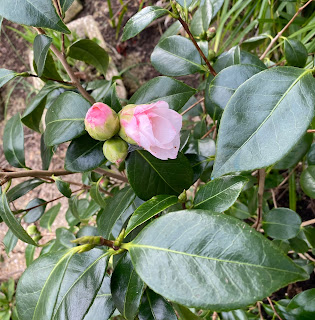 At the plot it was obvious that the early peas I had sown had disappeared - either eaten or rotted - so I cleared the space and replanted with some directly sown broad beans which I then covered with fleece.  The autumn sown broad beans at the other end of the bed were thriving.

On 28 January we had some dramatic evening skies 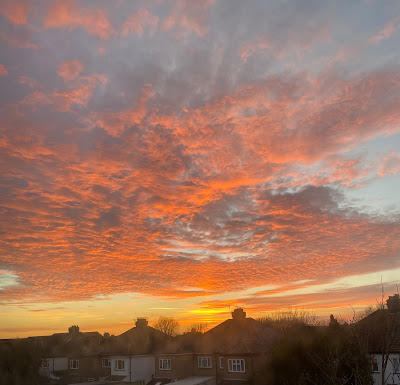 The following day Storm Malik hit Scotland and the north of England followed on
30 January  by Storm Corrie.  Fortunately the south of England escaped most of this but in the north trees and power lines came down.
On the plot, the forced rhubarb was ready for harvesting.

A stormy end to January but the forecast for the coming weeks was looking good.