The hoped for improvement in the weather hasn't come!  Whilst temperatures have been around the seasonal norm of 20/21C most days, we have also experienced very strong winds and on some days the temperature was only 16-18C.  We have also had a lot of rain although, here on the south coast, we were more fortunate than other parts of the country, which experienced severe thunderstorms and more flooding after the terrible flash floods in July.
Generally the first half of the month has been cloudy and overcast; a very disappointing summer.
One of my first tasks this month has been to start lifting the second early (Nicola) potatoes. Fortunately they are free from any signs of blight and much of the foliage has already died down.  We have had a reasonably good crop.

At the beginning of the month I also picked my first cucumber...

...it was grown from some seeds I had brought back from Spain before the first lockdown. (We were still in the EU at the time, so it was legal - I am not sure what the regulations are regarding importing seeds post-Brexit)
Several of the courgettes were now marrow size and apart from finding interesting things to do with them, we have given several away.  I think that when a courgette is over a foot long it really ought to be called a marrow!

3 August was decidedly cool so I spent some time indoors in the kitchen - time to get out the spiraliser and make courgetti spaghetti -  and more courgette lemon drizzle cake.

Whilst most of our tomatoes are still green, one of the beefsteak variety (Pantano) was ready to pick!

The cherry tomatoes were beginning to ripen.

On 5 August  I was back on the plot and the wild area around the pond was looking good surrounded by scarlet flax (Linium), poppies and Nigella
It was a good time to begin to prepare some raised beds for late planting. I removed the annual weeds and then spread a layer of compost from the wormeries.

The aubergines in pots looked healthy but I decided to plant them out. I read that aubergines and asparagus plants do well together, so I planted them in the asparagus bed. The plants were rather pot bound with dense roots, so it was a good time to transplant.

The good weather continued on 6 August.  The sunflowers had been full of seeds, but they were soon removed by birds and squirrels, 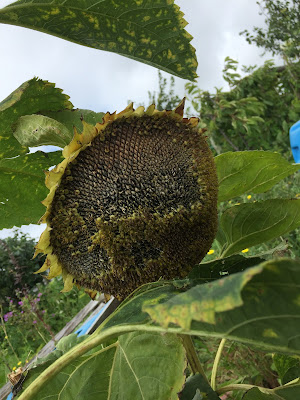 The tomatoes had survived the wind and the collapse of the greenhouse earlier in the year and luckily appeared blight-free.

There was also a good harvest of courgettes (now marrow size), the first tromboncinos and the first  runner beans

Saturday 7 August was spent away from the plot with a visit to The Valley for the first League One game of the season between my team, Charlton Athletic, and my wife's, Sheffield Wednesday.  It was also the renaming of the east stand as the Curbishley stand and Curbs, a very popular former, successful Charlton Manager, was there with the new owner of the club Thomas Sandgaard and new manager Nigel Adkins
Sadly it was a very disappointing game but at least a draw would mean relative calm at home. My wife, Sylvi, is from Sheffield and a lifelong Owl. Its a family thing; in Sheffield; you are either born an Owl (Sheffield Wednesday) or a Blade (United).  There are no mixed marriages in Sheffield!
10 August, back on the plot, tomatoes were beginning to ripen but the foliage was  dying back.  It didn't look like blight but to be safe, I began to pick any fruits that were starting to ripen and finished off the process at home.
It was a good time to continue repairing the footpaths between the beds as there was a plentiful supply of free wood chippings.
I peeped under the fleece tunnels to see how the brassicas were doing but they were outgrowing the space and it would be necessary to find an alternative covering for them.
It was also satisfying to lift some of the remaining early potatoes (Duke of York) and second earlies (Nicola) There was a good harvest of potatoes, beetroots, runner beans and tromboncinos. 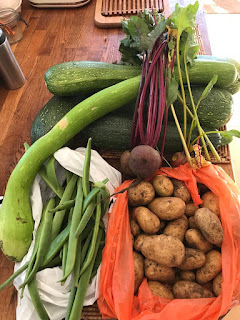 Wednesday 11 August was another dry day and a need for watering.  More tromboncinos were appearing and the pumpkins growing in size every day.

It's usually a dilemma whether to eat the tromboncinos young and green, when they can be treated like courgettes, or to leave them to ripen when they are more like a butternut squash.  There was no dilemma this year - we have so many that we couldnt possible eat all of them young.
We look set for a good crop of pumpkins later in the year.

The other thing growing well was the couch grass on the footpath and it was a long and laborious task to remove it before laying a new layer of wood chips.
I replaced some of the old plastic tarpaulin under the footpath with cardboard before laying more wood chippings.

Thursday 12 August  - At home the tomatoes were doing much better than on the allotment and showing no signs of blight or other disease but a combination of slugs, snails and woodlice had inflicted damage on the lower fruits. 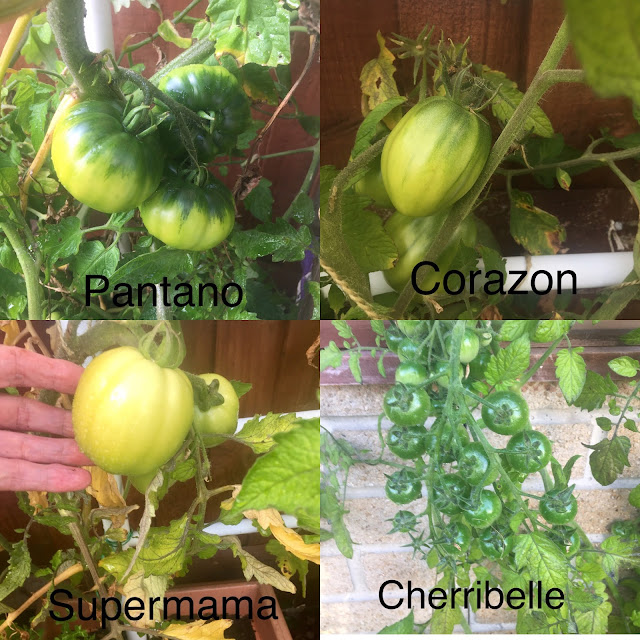 On the allotment we harvested the blueberries

Friday 13 August  - We had loads of flowers on the Patty pan squashes  but sadly they all appeared to be male. I abhor male dominance in society and the same applies in my garden!  Hopefully, however, the female flowers may appear later.  The differential timing may be nature's way of ensuring cross-pollination with other squash plants.
The borlotto  beans were beginning to ripen and display their scarlet striping

15 August - I harvested some Padron peppers.   I think I let some grow rather large!
There was also a good selection of beetroots, traditional red Boltardy  as well as white and orange ones from the rainbow mix that I had planted.

16 August - We seemed to have a good crop of plums following the June drop and to date no sign of brown rot which had plagued us the year before last.

18 August - The bad news!  Our tomatoes on the allotment were beginning to show the signs of blight.

Thursday 19 August was dull and overcast in the morning, when we spent time removing all the tomato plants to take them off the site.  It is not advisable to compost them as the fungus will survive and infect the soil next year.
There were a few unripe fruits which looked unaffected so we picked them to see if they would ripen at home.  The afternoon turned to persistent drizzle and very dreary, damp and cold. (The weather forecast had been cloudy and 19C - it felt more like 15C)
Thankfully the tomatoes at home still seemed unaffected by blight, but as a precaution I started to pick any that had begun to ripen and brought them indoors.

The cherrybelle, cherry tomatoes were doing well and producing a regular daily supply.
The plot didn't see us over the weekend 20-23 as we were in London for the Vitality Big Half and to celebrate my 77th birthday and the 15th birthdays of two of my grandchildren, Shay and Kitty.  We had a superb meal at Midpoint, a Turkish restaurant by the river in Greenwich, which I would recommend highly.
The Big Half had also been very exciting and saw the return of Charlotte Purdue after an absence of 17 months due to injury which had resulted in her missing qualification for the Tokyo Olympics.
But on Sunday, Charlie stormed home to victory in Greenwich in the Women's half marathon, setting a new course record.
24 August and one of the aubergine plants which had been planted in the open ground was bearing fruit. The pumpkins were growing larger by the hour and the leaves and stems still green

We picked a good haul of courgettes, cucumbers and runner beans....

...and the Swedes were swelling nicely

At home we were picking tomatoes daily

26 August - we expect to lose the odd tomato to slugs and other pests which make holes for the woodlice to find a new home!

27 August I am still picking some tomatoes before they are fully ripe as a precaution and ripening them indoors.

I am still leaving several fruits to ripen naturally on the plant and on 31 August they seemed to be doing well.

The seed packet said that the Super Mama, could produce fruits of 150g to 200g each. They weren't wrong.

It has been a month of mixed weather but we are hoping for a late summer and more settled conditions in September.