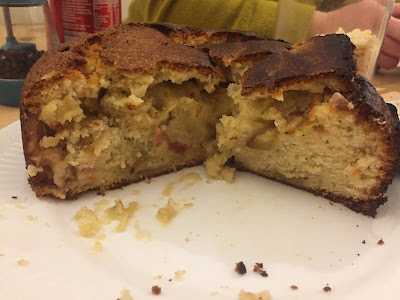 We have a plentiful supply of rhubarb on the allotment and had our first picking in early March. 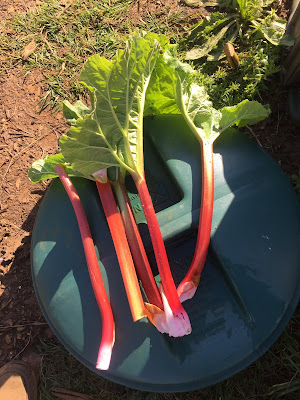 So when Selina, a near neighbour on the allotment, posted a photo of her rhubarb cake on Instagram, it looked so good that I just had to ask for the recipe, which she kindly sent.

I think I could have coped with the instructions above which Selina sent but she also referred me to a useful link to the Riverford website which has a plethora of recipes - sweet and savoury - using rhubarb, but here's Selina's rhubarb and yoghourt cake.

Normally when making a cake I would cream together the butter and sugar then add eggs and liquid and fold in the flour, but surprisingly this recipe was different.  I decided there must be a reason - (perhaps it is so the sugar can draw the juice from the rhubarb) - so I followed instructions!

I mixed together the flour, sugar and salt as instructed...

...and then added the orange zest
I cut the rhubarb into 1 inch long pieces...
...and added to the flour/sugar mixture


folding over to ensure all the rhubarb was coated
I then mixed together the beaten eggs, butter, yoghourt and vanilla essence.  I didn't have any orange flower water, so I substituted Rose water.  When these were well mixed, I added this to the flour/sugar mix and gently folded the mixture with a wooden spoon to ensure the dry ingredients were fully integrated.  Riverford advise against "over-mixing", which I assume is to keep the cake light.


I greased a 9 inch cake tin with butter and added the cake mixture, levelling off with a spatula.
The tin was then placed in the middle of the pre-heated oven. After 45 minutes the top was looking a little overcooked and perhaps I should have covered it sooner with foil or buttered paper.  I was worried that the inside might not be cooked but a test with a skewer suggested it was.
I removed the the cake from the oven, left to cool for 10 minutes before turning out on to a cooling rack.  We decided, however, to try some whilst it was still warm............

I did notice, however, that my cake looked very different from the one Selina had posted on Instagram!  Having sent me her recipe, Selina informed me later that she had used brown flour and brown sugar and had added ginger in syrup as well as upping the rhubarb by 100g as brown flour can absorb more moisture.  Obviously this is a very adaptable recipe.

I think we are on a new adventure here - I love the combination of rhubarb and ginger and will certainly try adding some next time.  I often make rhubarb and ginger jam and usually add crystallised ginger when stewing rhubarb or making rhubarb pie - I'm not a crumble fan but, if you are, try rhubarb and ginger crumble.  I must also try Riverford's rhubarb, pistachio, orange and cardamom cake it sounds yummy!

Thanks for the recipe Selina. Happy baking everyone.