There was a sudden change in the weather mid-February with sunshine and record temperatures across the UK.  In Hove the daytime temperature in the middle of February was as high as 15C and this spring-like weather has brought a flurry of activity on the allotment....and a sure sign that Spring is on the way, my Hellebores at home are in flower.

I had managed to clear half of the area needed for my first early potatoes earlier in the month and fortunately Luke was on hand to help me finish the job. A giant cardoon, over 2.5 metres tall and 2 metres wide, which was engulfed in bindweed had been moved from this area, leaving a large hole about half a metre deep.  When we dug the area around where the cardoon had been, we managed to fill the wheelbarrow twice over with bindweed roots some of which were 6mm thick.  No doubt we left some behind so we will need to be extra-vigilant and ready to tackle the weeds as they show through.

From time to time we are reminded why we subject ourselves to all of this when we reap the rewards. Purple sprouting broccoli is one of my favourite vegetables and we are having a wonderful harvest.
The Cavolo Nero has finally finished and going to seed and we have salvaged the last few leaves, pulled up the plants and given the ground a preliminary dig in preparation for planting the second early potatoes.

The spring like weather has also encouraged me to sow some early peas indoors. There are several early varieties that can be sown in January or February but I haven't had much success with these in the past.  Kelvedon Wonder has always been a heavy cropper and, although the recommendation is to sow indoors in March, I have taken a risk and sown some this month.  The added joy is that they germinate quickly and I had seedlings showing within a week.
When they were about 5cms high I put them outside during the day to harden off, covering them with a cloche at night.

I have also sown my first leeks and it was so satisfying to see them sprouting within a few days.


The worms in our wormeries were very well fed over the Christmas and New Year period and they have produced some rich compost, which I have spread over the remaining empty raised beds.

The couch grass and perennial weeds which we dug up in the autumn, with great clods of heavy earth adhering, has been sitting in a great heap over the winter.  With a fine sieve, Sylvi has been busy riddling, recovering as much soil as possible, leaving the roots and any remaining vegetation to go to the dump - ie civic amenity site - where it can be properly composted.

The remaining fine soil has been added to the raised beds mixed with some well rotted compost.

Parsnips are notoriously difficult to germinate but I have had modest success in past years. I had some seed tapes left over from last year so have taken a chance by sowing them in one of the raised beds.  Nothing venture, nothing gain!  I have also sown a couple of rows of Boltardy beetroots, having just lifted the final remaining ones from last year.


I raked the area which we had prepared for the first crop of potatoes and then made four shallow trenches about 6 inches deep in which I put a layer of peat-free potting compost.


I started the chitting process at home for the second earlies - Charlotte  and Nicola.....
and inspected the Duke of York first earlies which looked almost ready for planting.

I hope we have not been deceived by this false-spring but decided to plant them on Sunday 24th February, under blue skies and warm sunshine with the temperature approaching 20C!  The recommended distance between rows is 28 inches  (71 cms) and for the potatoes to be 12 inches (30 cms) apart.  I usually plant them a little closer - my rows are 2 feet apart (61 cms) and I planted the potatoes 10 inches (25 cms) apart.

I planted the potatoes in the trenches at a depth of 6 inches (15cms), covered them with peat-free potting compost and then raked over the surrounding earth to form low ridges. 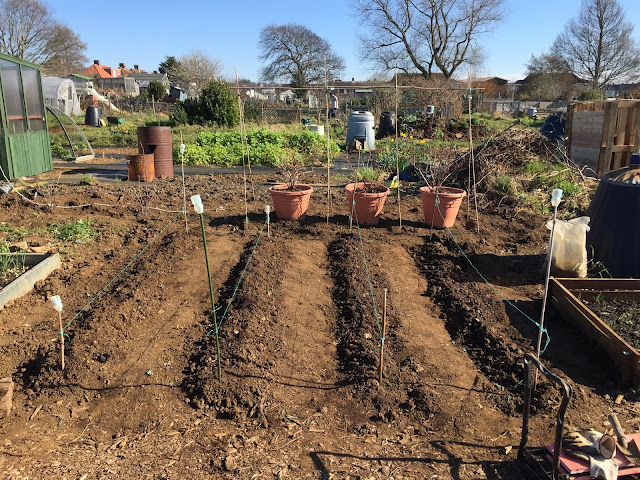 I then gave them a light watering and a top dressing of an organic potato fertiliser.  As the shoots sow through I will regularly rake over surrounding soil, increasing the height of the ridges and keeping them covered until the risk of frost is reduced.

With the continuing warm weather, I have planted out the first batch of peas.

On the last day of the month, temperatures began to fall - but they're still higher than average for the time of year - and rain is predicted for the next few days.