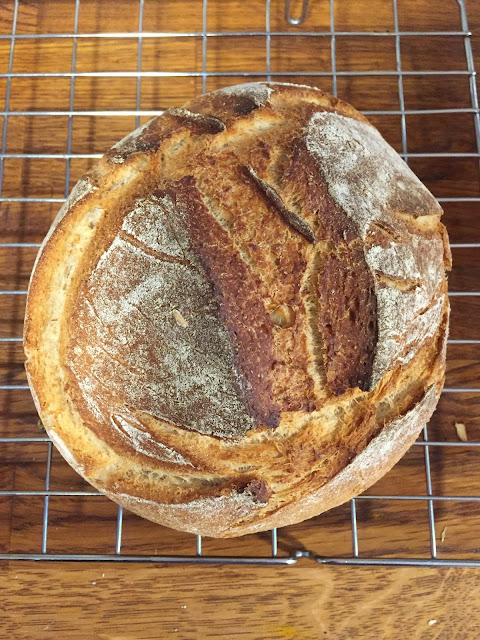 I used a bread machine to make the basic dough, but you can use any recipe up to an including the first rise.  As I didn't have a recipe for a 50/50 loaf, I made my own by combining and adapting two recipes designed for my machine, one for a Basic White Loaf and the other for a Wholemeal loaf.

Adding a vitamin C tablet (crushed and added before the flour) is often recommended when using wholemeal flour, to aid the rise.  I didn't on this occasion as I didn't have one and as it was 50% strong white flour felt it wouldn't need it anyway.

I followed the machine instructions and added the ingredients, in the above order, to the pan and set the machine to the dough setting which is 6 minutes mixing, 34 minutes kneading and 1 hour rising at 32C.

(if you don't have a bread machine, follow any recipe either for making by hand or food mixer with a dough hook then leave to rise until doubled in size then follow the rest of this method).

I then removed the dough from the machine.....

.... kneaded gently for a few minutes on a floured board and then shaped into a ball

... then made one deep slash across the top with a sharp knife

....placed the shaped dough in my cast iron casserole pot, which I had lined with baking paper


....placed the lid on top and put the dish in a cold conventional oven.  I set the oven to 240C and switched on.  After 30 minutes I took a peek to see how it was doing

This was the final result


I left the loaf for 5 minutes in the pot, then removed and placed on a rack


Whilst it was still warm, but cool enough to handle, I could not resist trying a slice