We left the sunshine and temperatures of 26C in Spain to return to the UK where temperatures were in single figures with a lot of rain.  It has been a very wet November, although in the south east we have fared much better than the rest of the country, especially the north, where there has been extensive flooding with the Doncaster/Sheffield area being particularly hard hit.

The Aquadulce broad beans that I had sown in October were looking good, and few seem to have been eaten or damaged by animals.


I planted onion sets and garlic which I protected with fleece.  Birds seem to think the growing tips peeping out are worms and peck at them and pull them up, and I was hoping the fleece might prevent this.


Some of the sprouts were infected with aphids at the lower end of the stem so I removed these and some of the yellowing leaves, and hopefully we will have a decent crop for Christmas.
We had regular pickings of kalettes - they are a cross between kale and sprouts and produce small florets, like sprouts that have blown


I sowed some more broad beans and decided to provide some protection from weather and predators by laying some fleece.

Around the middle of the month there were a few rain-free days and even some sunshine, which encouraged me to clean the debris out of the pond and clear the surrounding area of weeds.  Having removed the pondweed, I could see that my water lily was alive and had almost reached the surface,
A neighbour gave me some medlars which i have taken home for bletting (ripening)

I had saved the seeds from the pumpkin which we had harvested last month but they obviously were not in a dry enough location and had started sprouting!

On the odd dry day, I also tidied up some of the empty raised beds and added some compost from the wormeries.
We had loads of windfall apples and there are still some on the tree.  I have taken home several bags for cooking and preserving and have given away almost as many. 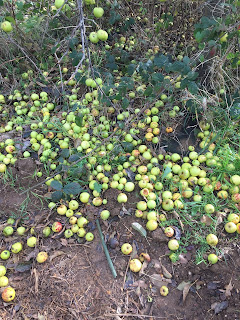 I also lifted the last of the beetroots.  They are so sweet and delicious, I will grow more next year.

In addition to the kale, cavolo nero and kalettes, I have been picking some of the lower Brussels sprouts and some of the younger leaves of the purple sprouting broccoli to serve as mixed greens.
After a brief spell of dry weather, the rain returned with a vengeance and this, together with campaigning in the General Election (which had been called for 12 December) conspired to keep me away from much needed tasks on the plot.

But despite the appalling weather, we have had a lot of good produce and have made some progress, especially in renewing the footpaths with wood chips and bush and tree prunings.