OUR ALLOTMENT - Life on The Weald January 2018

Life on The Weald January 2018

The weather has been mixed during January but we have certainly had a lot of rain.  I have had a few attempts at digging areas that have not yet been cleared but the ground is really too wet and it is difficult to shake any soil off the roots of the couch grass and bindweed which is plentiful.  With Luke's help, however, we have managed to dig up some buried carpet and plastic bags and remove a few brambles, but they are so deep rooted I am sure they will return.

With the threat of yet more rain we renewed the roof felt on the shed but now need to find some battens to ensure it stays on.  We applied the roof felt with roof felt adhesive and nailed down the edges but with strong winds around 15 January it began to lift on one corner and with the threat of gales for 17 and 18 January we had to take some emergency measures and have screwed and nailed on some odd pieces of wood as temporary battens  (with the intention of doing the job properly once we get a reasonably dry and calm day).  We have measured up and now need to find some suitable wood and cut battens to fit.   We did manage a bit of weeding in the raised bed where the broad beans have shown through and around some of the onions.  I have also sown another double row of Aquadulce broad beans.

The soil seems quite fertile so we didn't apply any manure in the autumn/early winter but we have a plentiful supply of home produced compost from our wormeries, some of which we will apply this month or next.  We haven't limed any of the areas where we propose to plant the broccoli and kale (and any other brassicas) so we will see how things go this year and do a soil test in the autumn. As we have only had half the plot for one complete season and the other half since late autumn, and are still in the process of clearing the site, we haven't yet organised the plots into zones for crop rotation but we will apply the rules to the raised beds as far as possible and get our zoning and rotation in order for the rest of the plot for 2019. We will follow the basic principles of crop rotation.

For the simplest crop rotation, there are three groups of vegetables:
The plot needs to be divided into three zones and the crops rotated as follows:

We will do our best!

We are only just discovering what crops were grown where on the half-plot we took on in October.  Whilst clearing the area to plant the last of our blackcurrant bushes we unearthed these potatoes 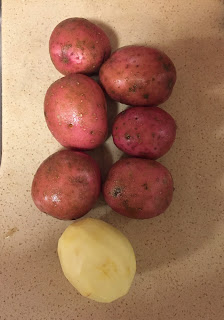 They had suffered a little from pest attack but most of it was near the surface and surprisingly, despite the fact that they should have been lifted months earlier, were remarkably good inside and provided an excellent mash. 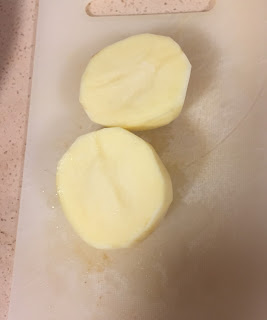 I don't know the variety (possibly Desiree) but we have decided not to grow any late varieties of potatoes, only earlies.  Late varieties are important if you are aiming for self-sufficiency, but our major aims are difference, flavour and value.  Maincrop potatoes are (forgive the pun cheap as chips in the market and I don't find a great deal of difference in taste with homegrown, and they take up a lot of space for a long period. On the other hand, the taste of freshly lifted new potatoes is a "wow" experience at a time when first arrivals in the supermarkets are expensive (or imported from Cyprus or Egypt) and not nearly so tasty.

Having decided to grow only earlies - we may have a bit of a rethink.  We don't know what will do well on our new plot but we had success last year with Charlotte and Nicola on the old plots at Neville and Mile Oak.


Which potatoes to grow?

Nicola are a late variety but we grew them at the same time as the second earlies last year and they did well so we might try them again if we have room. (Actually we have the room, it’s a question of whether we can clear the space in time!)

According to the Sutton’s catalogue Rocket is a very early, heavy cropping, white waxy variety. Whilst planting in early to mid-March is recommended for cropping in early June, I have read somewhere that they can be planted in the south around late February and could possibly crop by the end of May but that pre-supposes no late frosts (last frosts in Hove are generally predicted for the last week of March). What you don't want is the young leaves appearing above ground before the last frost. Rocket appear to be susceptible to blight but, as this usually occurs later in the growing season (late July -August), hopefully we won’t be affected if we’ve lifted them all before then,  Garden Focused are a bit negative about their taste – we shall just have to wait and see.

Sutton’s recommend  planting Vivaldi and Charlotte in March. Vivaldi should be ready for lifting in June/July and Charlotte a little later from June through August.

The advertising blurb claims that Vivaldi, a second early, is lower in carbohydrates and calories than similar varieties but Garden Focused are a bit sceptical about these claims!

Charlotte now appears to be the post popular salad potato in the UK.  Variously described as a late first early and as a second early, they can be planted in March and harvested June-August and are resistant to blight and scab.

To chit or not to chit

To chit means to encourage the potatoes to sprout.  It is advantageous to chit  early potatoes before planting as you will be planting them before the soil has warmed up and this may give you a crop a week or so earlier than otherwise.  Chitting is achieved by placing the potatoes in a tray (I use egg boxes) and placing them in a light, airy place indoors (although not in a heated room – a cool windowsill is a good place), unheated conservatory, cold greenhouse or garden shed, with the eyes pointing upwards. In the south-east of England this chitting process can start towards the end of January and later in the north.  Shoots will begin to grow from the “eyes” and the potatoes are ready for planting when the shoots are 2 -3 cms in length and the risk of frost has gone.( Earthing them up when planting can provide some protection from late frost)

I started to chit the Rocket potatoes in our unheated conservatory at home in the last week of January.

Now is the time to ensure that the raised beds are clear of weeds and a good time to add more nutrients to the soil.  We now have 4 wormeries on the go and have begun to spread the contents of the lower tiers on the surface of the beds.  Any unrotted material will continue to be broken down by worms, woodlice, beetles and other insects and a myriad of other organisms in the soil.

January has been one of the wettest on record and it has not been possible to do any digging on the cultivated areas - we need a good dry spell before even walking on the ground.  Fortunately we still have some vegetables to harvest.  We have already lifted the best leeks but we still have a few more which were planted out a little too late (and there are some baby ones still in the seed bed which we didn't transplant.


A few cabbages remain which hopefully we can harvest before the slugs get them! 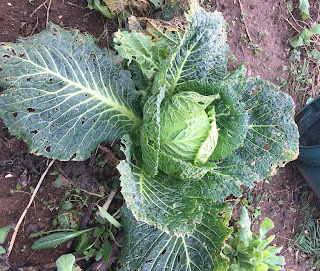 And we have a late harvest of Brussels sprouts 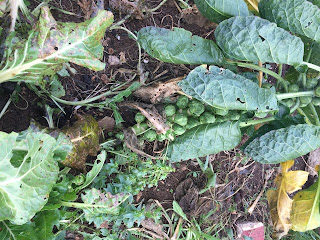 The weather has been so miserable that we have decided to seek some warmth and sunshine in Spain for a few days and hope that by the time we return in the second week of February the ground will have dried out a bit.