Cabra, gallineta and many more.....

Maybe I should learn to trust my instincts more.  I saw some fish in Ersoski in Santa Pola, labelled Cabra, and assumed them to be scorpionfish, which I had seen on the menu in several local restaurants.  It's a fish with a sweet taste and firm flesh which I had initially eaten several years before at the Zlato Sidra (Golden Anchor) in Lucija, near Portorož, Slovenia, caught fresh from the Adriatic.

I had not come across the name Cabra before, but fish in supermarkets and fishmongers in Spain almost always have a label indicating their scientific name and where and how it was caught. This notification of source (NW Atlantic) confirmed it as Cabracho so I assumed Cabra (which is otherwise goat in Spanish) was a Spanish abbreviation.

Having no access to the internet, I thought I would seek some confirmation from my books, which only added to the confusion.

In a rather old cook book Elizabeth Cass says Cabracho has no translation into Spanish but that it resembles Rascasio and is good baked in the oven.  She describes  Rascasio as an essential ingredient for fish soup.  I have since seen what I thought to be Scorpionfish labelled Gallineta (little chicken) but Dr Cass says this is Sand piper, a fish "resembling Rascasio but greyish in colour and very good cooked in the oven". But the Gallineta I had seen were red - definitely not grey - and looked like Scorpionfish to me.

Perhaps Davidson's Mediterranean Seafood might be clearer (Mediterranean Seafood
Alan Davidson 2002 Prospect Books: ISBN 978-1-903018-94-1) Here he describes Cabracho as Red Scorpionfish (Fr Rascasse rouge) and particularly recommends the cheeks as not unlike lobster. In France, Rascasse is regarded as an essential ingredient in bouillabaisse.

Davidson lists Rascacio as Black scorpion fish and Gallineta as Blue mouth scorpion fish, reddish brown in colour but with the inside of mouth blue.  My Gallineta did not have a blue mouth. It was definitely Cabracho , red scorpionfish!  Davidson describes Gallineta as similar to Redfish, also known as Norwegian haddock, which is found in the Atlantic.

In his book Seafood of Spain & Portugal (The Tio Pepe Guide to the SEAFOOD of SPAIN and PORTUGAL: Alan Davidson 2002 www.santanabooks.com ISBN 84-89954-21-6) Davidson confirms Cabracho is Scorpionfish/rascasse rouge which he says is called Pola de mar (chicken of the sea) in Catalan and he recommends baking whole. He says that rascacio is also scorpionfish, rascasse noire in French but smaller.  According to this book there are two varieties of Gallineta, G.rosado, slender rockfish found in the western Mediterranean and Morocco  (Fr rascasse rose) and Gallineta which, like Dr Cass, he says is Bluemouth which in Gallicia is called Cabra da altura (goat of the deep). Confusingly, the Portuguese use the term Cabra for gurnard

Clearly there are several different varities of scorpionfish, widely distributed in the Mediterranean and Atlantic. If you wish to confirm which fish it is you could consult the scientific name, usually on the label in Spain:

Or not bother and just assume that if it looks like Scorpionfish, it probably is and will taste delicious!
Apart from the fact that common names in Spain seem to be used, interchangeably, for different varieties of fish there is the added confusion of several languages and regional names, which are given in Wikipedia as:

Sea chicken, goat of the deep? If it looks like this 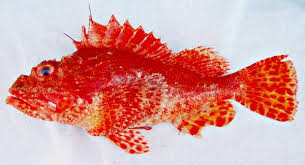 it's almost certainly some variety of scorpionfish and I recommend you buy, cook and enjoy.
Baking or poaching is recommended or use in fish stew. I have posted a recipe which I tried in Santa Pola in August 2016.  The spines can be mildly venomous, but can be removed by your fishmonger but if you handle carefully the poison is denatured in cooking and rendered unharmful.